Accessibility links
Peace Talks With Taliban? Depends On Whom You Ask When Afghan President Hamid Karzai said he was holding talks with Taliban leaders this week, his spokesman was quick to clarify the remarks: talks about talks, not actual "talks." The Taliban altogether denied it. There's an underlying issue of trust -- the government broke promises to protect insurgents who laid down their arms. Still, a council was formed to facilitate formal talks. 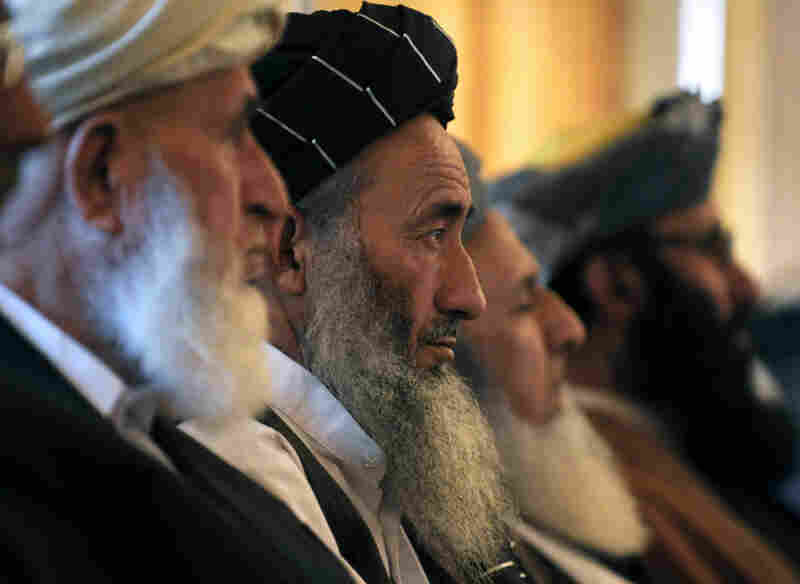 Members of the peace council listen to Afghan President Hamid Karzai speak during an inaugural meeting at the Presidential Palace in Kabul on Oct. 7. Shah Marai/AFP/Getty Images hide caption

There's been a flurry of claims recently that substantial peace talks between the Taliban and the Afghan government are just around the corner or are already under way.

Some of those claims have come from the Afghan president himself. During a televised speech earlier this week, Hamid Karzai said Afghanistan and the international community are marching toward reconciliation and that there are signs the Taliban are on board. He also told CNN that he has already begun holding secret talks with Taliban leaders.

"What he meant was mainly more in terms of contacts and people calling each other and saying, 'We're ready for talks,' " Omar said. "If you say 'talks' in the form of negotiations whereby you sit behind the table and discuss each other's conditions and discuss how this is going to be taken forward, no, in that form, we have not had comprehensive talks."

These sorts of nuances and conflicting versions of events are common in Afghanistan and are played out in the media, usually involving unnamed sources giving differing accounts of who is meeting whom.

The senior Taliban leadership, based in neighboring Pakistan, has denied there have been any meetings with the Karzai government.

Mullah Abdul Salam Zaeef, a former member of the Taliban and its ambassador to Pakistan, says the Taliban consider the Karzai government illegitimate and a puppet of the United States. They will not enter into negotiations with him, he says.

"Why the Taliban should talk with Karzai? Who is Karzai?" he says.

Zaeef says there are only two players who should be at the negotiating table: the United States and the Taliban. But he claims America is not ready; it's still trying to win militarily. He says the U.S. and the Afghan government are whipping up stories about peace negotiations in order to show progress in America's new strategy for Afghanistan -- and to sow confusion among the Taliban.

"They want to increase some kind of … worries in the Taliban that there is something going on," he says.

The prospect of peace negotiations may convince some Taliban to come back into the fold, but earlier efforts at reconciliation and reintegration have not gone well.

Afghanistan's Peace and Reconciliation Commission was formed more than five years ago to try to reintegrate Taliban members. Once they renounced violence, they were given a letter from the government promising to protect them.

The organization's director, Muhammad Akram Mir Hazar, says initially 100 to 150 men would come in each week to surrender. Now, he says, that number has tailed off dramatically because Afghan provincial authorities have reneged on security guarantees.

"These people have been arrested by the government, and their property was seized by some of the local warlords and powerful people," he says. "And the government did not support them."

Mir Hazar says this has made Taliban members wary of buying into any peace plan, but government officials say this time things will be different.

In a crowded hall in the center of Kabul, members of a new higher-level peace council gather. President Karzai recently set up the council as a way to guide any formal talks with the Taliban and other insurgents.

"This is the right time [for] all of the sides to show their flexibility in this regard," says council member Abul Hakim Mujahid, "and take into consideration the high national interest of the people of Afghanistan."

Mujahid says without the help of the international community, the peace process will not bear fruit.