Accessibility links
Dick Van Dyke Plays Not My Job The veteran entertainer plays a game called "Dick van Dyke, meet Dick, van and dyke."  Dick. Van. Dyke. Together, it's an iconic name in entertainment, but separated into its component words, it's a three-question Not My Job quiz. 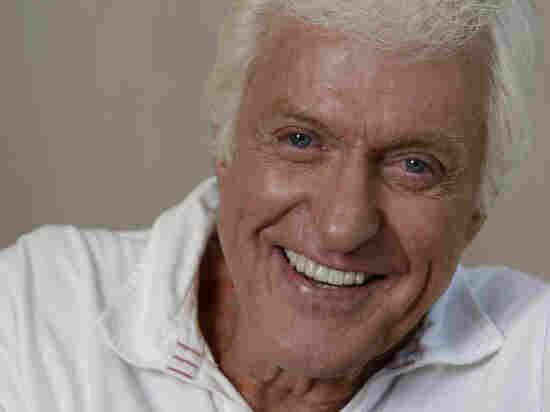 Dick Van Dyke's TV shows and films are loved by so many, and watched and rewatched so many times, that they named the DVD after him. His 1968 film Chitty Chitty Bang Bang is being rereleased in November and his musical memoir Step in Time premieres in Los Angeles in December.

We've invited Dick Van Dyke to play a game called "Dick van Dyke, meet Dick, van and dyke."  Dick. Van. Dyke. Together, it's an iconic name in entertainment, but separated into its component words, it's a three-question Not My Job quiz.

And now the game where we invite on great people to do silly things. It's called Not my Job. Our guest this week is a man whose TV shows and films are so beloved by so many, and watched over and over again by so many succeeding generations, that they named DVDs after him.

SAGAL: Hello. All right, I just got to be personal. I have watched you for so long. "Chitty Chitty Bang Bang" was my favorite movie when I was a kid and I've watched "Mary Poppins" so many times and "The Dick Van Dyke Show." So my first question to you is will you be my dad?

VAN DYKE: I can be your grandpa.

SAGAL: That would be fine. I would take that at this point. Out of all the things you've done, is there one thing you're most proud of?

VAN DYKE: Well, I tell you, I gauge it by the amount of fun I had. All of us involved say "The Dick Van Dyke Show" was the best five years of our lives. We were like otters at play.

VAN DYKE: It never was work.

SAGAL: Yeah, I thought that up myself.

SAGAL: So, I guess my question is you made working in TV comedy look like an absolute joy. You and Morey Amsterdam and Rosemarie having a great time, going home to your great house in New Rochelle. Was it really like that working on the show?

VAN DYKE: It was. Everybody looked forward to coming to work every day. Carl, of course, is a brilliant, brilliant writer.

VAN DYKE: And we just couldn't wait to get in front of the audience and show them what we had. It was - I never wanted to quit. Carl wanted to quit after five years. He thought, perhaps, it got repetitive or something. I'd still be doing it yet, if he'd let me.

SAGAL: You've been in show business for so long, is there one thing that people recognize you most for? And can you guess what it is from the look on their face when they come up to you?

VAN DYKE: It's usually my voice, if I say something, that's what gives me away.

VAN DYKE: Because I have white hair now, you know.

SAGAL: How did you get started? You grew up in Danville, Illinois.

SAGAL: We're here in Illinois. People are excited about that. You started at a young age, right? You were singing, you were doing comedy, what were you doing?

VAN DYKE: Well, at the time, believe it or not, I started out as a teenager in radio.

VAN DYKE: I was an announcer at 16. During the war, everybody got drafted, so they had to hire me. And that got me started.

VAN DYKE: Yeah, went out here with a buddy of mine. We did a nightclub act. Oh, I did local television in Atlanta and New Orleans, little shows, and finally ended up under contract with CBS. And I did game shows, children's shows. Do you know that I was the anchor on the "CBS Morning Show"?

VAN DYKE: And my newsman was Walter Cronkite.

SAGAL: You're doing a memoir in December. Your musical memoir.

VAN DYKE: Oh, yes, at the Geffen Theater here. I have a little quartet, three guys and me. We started out just singing at my house. Having a pizza and singing every Tuesday night.

VAN DYKE: Somebody asked us to do a benefit, and then we did another one and another one. And all of the sudden, in August, we ended up at the Ford Theater in Washington, singing to the president.

SAGAL: So you met the president?

SAGAL: Was he as tongue-tied and goofy with you as I am right now?

VAN DYKE: No, I was the tongue-tied one.

SAGAL: Really? When the president said, you know, I loved you in - what did he say? What was his thing?

VAN DYKE: His wife, Michelle, said you're my favorite show and he said, she's not kidding.

VAN DYKE: And then after we did our act, Obama came up on the stage and said you've got to teach me those moves.

VAN DYKE: Well, I didn't have a chance, but I think he could do them.

SAGAL: I assume you mean tripping over the ottoman.

SAGAL: You did "Mary Poppins" and despite your amazing charm and the incredible success of the movie, you did get a little guff for your accent.

VAN DYKE: Oh, I don't talk to British people because they just make a mess of me.

VAN DYKE: Oh, they tease me to death about it.

SAGAL: Are they good natured about it at least?

VAN DYKE: Oh, sure. They just tease me. But I'll never hear the end of that. But I have a defense.

SAGAL: What is your defense, sir?

VAN DYKE: They got me a coach who was Irish.

VAN DYKE: His name was Pat O'Malley and he didn't do an accent any better than I did.

SAGAL: Dick Van Dyke, what a pleasure to have you on our show. We have asked you here this week to play a game we're calling...

SAGAL: Dick Van Dyke, together an iconic name in entertainment. But separated into its component words, it's three different things we can ask you about. Get two questions about the parts of your own name right, you'll win our prize for one of our listeners, Carl's voice on their home answering machine. Carl, who is Dick Van Dyke playing for?

KASELL: Dick is playing for Jeff Weinkauf of Eugene, Oregon.

SAGAL: Your first question, of course, is about a Dick, in this case Dick...

VAN DYKE: About a what?

SAGAL: About a Dick.

SAGAL: It's about Dick Nixon, specifically.

SAGAL: When a young man, Dick Nixon fell in love with one Pay Ryan, who was acting in a play with her. He courted her fiercely, including doing what? A, composing a song in her honor, titled "Pat, Pat, You Make My Heart Go Pitter Pat." B, driving her to and from dates with other men. Or C, making what some say might be history's first ever mixed tape.

VAN DYKE: I think he wrote a song.

SAGAL: You're going to go with that?

SAGAL: Sadly, no, he did not write a song. He drove her to and from dates with other men.

SAGAL: She wasn't sure about him, but he sure did love her. So he would drive her to and from dates with other men and wait around, like in a bookstore or a movie theater, until she was done and drive her home.

VAN DYKE: Are you trying to say he was a pimp?

SAGAL: I'm sorry, but in the universe in which I live, you, Dick Van Dyke, do not know that word.

SAGAL: I'm having some trouble.

SAGAL: I'm trying to imagine, you know, Bert in "Mary Poppins," oh yeah, this street is where all the pimps are.

SAGAL: Let's not go down there. Let's go here to Cherry Tree Lane.

SAGAL: Chrysler, they invented the minivan back in the '80s, has a brand new, revolutionary van on the production line. What is it? A, The Man Van, the masculine minivan for men; B, The Speed Van, a 12-cylinder 300 horsepower van that can do 180 miles-per-hour; or C, The Nano-Van, half the size of a standard minivan, but with still seven seats?

VAN DYKE: Oh, my word. I think it was called the Man Van.

SAGAL: It is the Man Van.

SAGAL: Men are notoriously resistant to minivans, so this one is designed to appeal to them. More masculine, it'll have a sportier look, more chrome on the interior, that sort of thing. All right, we've done Dick, we've done van, now it's time for your third question on the subject of dikes.

VAN DYKE: I was afraid of that.

SAGAL: So we Googled, just because we were curious, world's biggest dike. What did we find? Was it A, the Saemangeum Dike in the Yellow Sea, the Zuiderzee Dike in the Netherlands, or the Weir Dike near Lincolnshire in England.

VAN DYKE: I think it's the Zuiderzee.

SAGAL: You think it's the Zuiderzee?

VAN DYKE: Well, I'm Dutch. It's got to be Zuiderzee.

SAGAL: You think that...

ROCCA: Is that the first one or the third one, the Zuiderzee?

SAGAL: The Zuiderzee is the second one I mentioned.

PETER GROSZ: What country was the first one in?

SAGAL: It's in the Yellow Sea.

VAN DYKE: The Yellow - oh that one in China?

VAN DYKE: Oh, that is the biggest one.

VAN DYKE: I had to think about that.

VAN DYKE: I forgot about that one.

SAGAL: You actually knew that?

VAN DYKE: Yeah, I knew all about that.

GROSZ: He's got to know all about all the dikes in the world. If your last name was Dyke, you'd keep up on all of them, too.

SAGAL: Well that's remarkable. Carl, how did Dick Van Dyke do on our quiz?

VAN DYKE: Do you know there are words to that?

SAGAL: What are the words to the Dick Van Dyke theme song?

VAN DYKE: You want me to sing it for you?

VAN DYKE: (Singing) So you think that you've got trouble, well trouble's a bubble, so tell old Mr. Trouble to get lost. Why not hold your head up high and stop crying, start trying, and don't forget to keep your fingers crossed. When you find the joy of living is loving and giving, you'll be there when the winning dice are tossed. A smile is just a frown that's turned upside down, so smile and that frown will defrost. And don't forget to keep your fingers crossed.

ROCCA: No, that was the greatest thing. It's fantastic. I love that.

SAGAL: Did he really?

GROSZ: That is fantastic.

SAGAL: I may never be happier than I am right now.

SAGAL: This is amazing. Dick Van Dyke made some of the best movies and TV shows I have ever seen, and I keep watching them. His musical memoir, "Step in Time" premiers in December in Los Angeles. Dick Van Dyke, what a joy to finally talk to you and have you on our show. Thank you of much for joining us.

VAN DYKE: Thank you. I wish I'd been there in person.