Accessibility links
Fox News Gives Juan Williams $2 Million Contract NPR has been sharply criticized for terminating the contract of news analyst Juan Williams for remarks he made about Muslims. Williams appeared on Fox's The O'Reilly Factor Thursday night to respond to NPR's decision. Fox has extended Williams' contract with the network for three years for $2 million. 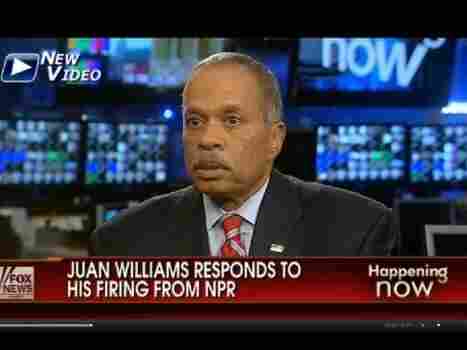 Juan Williams will have a guest slot as host of The O'Reilly Factor on Friday night. FoxNews.com hide caption

Williams was fired Wednesday for violating NPR's ethics policy over comments he made on Fox News about Muslims.

But those comments -- and NPR's response -- have prompted questions about where the boundaries are drawn for journalists these days.

Williams appeared Thursday night on The O'Reilly Factor, the same Fox program where he made the initial comments that seeing fellow airline passengers dressed in Muslim garb makes him nervous.

This time, Williams told host Bill O'Reilly his remarks were misconstrued but that his ouster by NPR was about something else altogether.

"I don't fit in their box," Williams told O'Reilly. "I'm not predictable, black, liberal. And let me tell you something else, you were exactly right when you said you know what this comes down to, they were looking for a reason to get rid of me because I'm appearing on Fox News. They don't want me talking to you."

The cable news channel assailed NPR for much of the evening while leading Republicans called for the U.S. Congress to cut off federal funding for NPR News. One of the first was former House Speaker Newt Gingrich, himself a paid Fox commentator.

"It is an act of total censorship," Gingrich said. "I think that the U.S. Congress should investigate NPR and consider cutting off their money."

Mike Huckabee and Sarah Palin -- themselves possible Republican presidential candidates with similar ties to Fox -- chimed in with the same call, as did others in more of a position to do so, such as South Carolina Sen. Jim Demint and Ohio Rep. John Boehner.

NPR receives roughly 2 percent of its annual income directly from federal sources such as the Corporation for Public Broadcasting and the National Endowment for the Arts, but its member stations rely more heavily on such sources.

Despite the criticism, NPR CEO Vivian Schiller stood her ground Thursday: "As a reporter, as a host, as a news analyst, you do not comment on stories."

She said such restraint is a vital part of NPR's code of ethics, which states that news staffers cannot say things in other public forums that they could not say on NPR's airwaves as well.

"Certainly you have opinions -- all human beings have their personal opinions," Schiller said. "But it is the ideal of journalism that we strive for objectivity so we can best present the positions of people around all parts of the debate to our public so the public can make their own decisions about these issues."

Schiller had her own verbal miscue Thursday. In an address to the Atlanta Press Club, she said perhaps Williams would have been better served confiding his thoughts to his psychiatrist or his publicist -- a flip line for which she later apologized.

Still, some journalists with no ties to Fox blanched at the controversy. On her talk show, The View, ABC's Barbara Walters suggested that Williams' status as a news analyst for NPR who opined regularly on Fox was confusing.

"If you are a journalist, where you're supposed to be straight and narrow and not giving opinions, that's one thing -- but if you're someone giving your opinion, then you're allowed to give your opinion. You may or may not agree," Walters added.

Where professional boundaries lie these days can be tricky to define. Witness the recent firings of Rick Sanchez and Octavia Nasr by CNN and the forced retirement of Hearst newspapers columnist Helen Thomas. Each made controversial remarks in a public setting, but none of them did so on their own employer's airwaves or pages.

"I can't give you a conclusive position on it," he said. "What's the right way to go or the wrong way to go? I do know, once opinion comes into it, it gets to be very shaky ground."

Okrent said the danger is in having someone from a news organization that prizes studied neutrality appear frequently in another outlet that rewards contention and sharply defined opinion -- like Fox News.

Williams is now enjoying the full embrace of Fox News, which has given him a new three-year, $2 million contract and a guest slot, Friday night, as host of The O'Reilly Factor.