Accessibility links
Foreign Policy: A Prince's Mysterious Disappearance Prince Bandar bin Sultan of Saudi Arabia has reappeared after a two-year period spent in hiding. The colorful prince is closely tied to the U.S. Simon Henderson of Foreign Policy argues that while we still do not know where Bandar has been, his re-emergence in the House of Saud is a sign that things will soon change in the royal family. 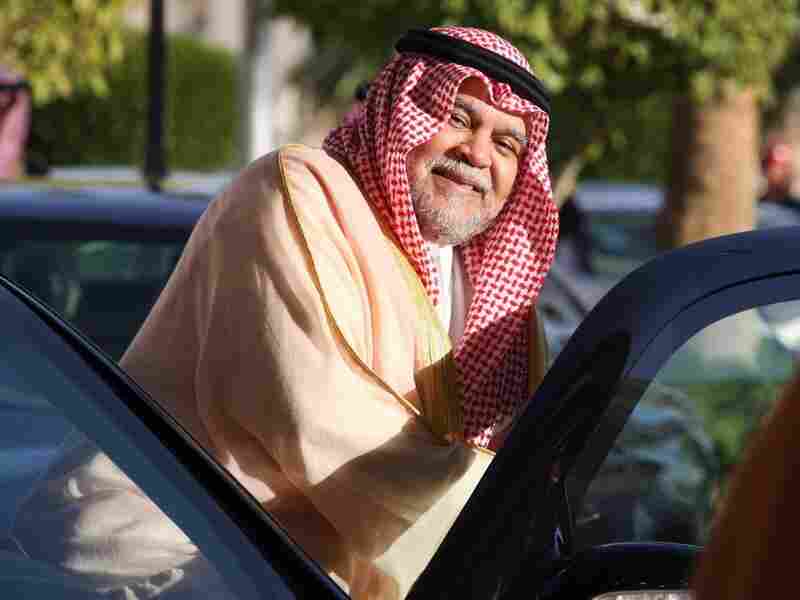 Simon Henderson is the Baker fellow and the director of the Gulf and Energy Policy Program at the Washington Institute for Near East Policy. He is author of After King Abdullah: Succession in Saudi Arabia.

For a generation, Prince Bandar bin Sultan was Riyadh's man in Washington. As the Saudi ambassador to the United States from 1983 to 2005, he was even dubbed "Bandar Bush" for his close ties to that powerful American political dynasty. After leaving Washington, apparently burned out, he returned to Saudi Arabia to head the newly established Saudi National Security Council, the function of which was not, and still is not, clear. However, he continued to sneak back into the United States periodically because the king quickly decided he preferred Bandar over his successor, Prince Turki al-Faisal, as his channel to the White House -- a situation that eventually led Turki to resign in protest.

And then, around 2008, Bandar vanished from the public eye. Exactly what caused Bandar to fall out of political favor remains unclear, but he had acquired no shortage of enemies, even within the royal family, over his long tenure as the principal contact between Saudi Arabia and its most important ally.

Bandar's disappearance prompted a number of conspiracy theories. The Iranian media, for example, has rather creatively accused him of masterminding al Qaeda's activities in Iraq and funding al Qaeda-affiliated Sunni Islamist groups in Lebanon in an attempt to undermine Hezbollah.

Prince Muqrin was joined in welcoming Bandar by a virtual who's who of Saudi political figures: Prince Khalid bin Sultan, assistant minister of defense and aviation and inspector general for military affairs; Prince Muhammad bin Naif, assistant minister of interior for security affairs; Prince Abdul Aziz bin Fahd, state minister and president of the Court of the Presidency of the Cabinet; Prince Faisal bin Khalid bin Sultan, advisor to the crown prince; Prince Salman bin Sultan, assistant secretary-general of the National Security Council. According to the Saudi Press Agency, "more senior princes" were also in attendance.

That's one helluva welcome, by any standard. By Saudi standards, it is enormous: an uncle, a half brother, three significant cousins, and a nephew, never mind the unnamed senior princes. The report said he had arrived "from abroad," but gave no further details. There wasn't even a photo, though one report says he has lost a considerable amount of weight.

So what's going on? First, a word of caution. There is an old saw that people who actually know what is going on in the Saudi royal family don't talk about it -- and people who talk about it don't know what is going on. All too often, this saying is a convenient device used by those close to the House of Saud to undermine reports critical about Saudi Arabia, but it's also an important reminder that we'll never know as much as we'd like about the kingdom's opaque politics.

Bandar has struggled with his health for years, recently undergoing two operations at the Johns Hopkins Hospital in Baltimore. The most prosaic explanation for his return is that, after convalescing in Morocco, where his father, Crown Prince Sultan, is vacationing, he has recovered and has now come home. His most likely ailment is a bad back, though two biographies in recent years have reported that Bandar has also had problems with alcohol and depression. David B. Ottaway, in The King's Messenger, described him as a "more than occasional drinker." And his (probably now former) friend William Simpson, in The Prince: The Secret Story of the World's Most Intriguing Royal, identified the mid-1990s as Bandar's "first period of full-blown depression."

But there appears to be more to Bandar's return to the kingdom than just improved health. The buzz, from a well-placed source close to the royal family, is that it has to do with the internal politics of the House of Saud and the vexing questions of royal succession: Who will take the throne after King Abdullah, and who will be the king after that? Bandar's talents for political deal-making have, supposedly, caused the royal family to overlook his reputation for self-interested decision-making and a certain lack of respect for many of his uncles.

Despite an outward facade of stability, the House of Saud is in turmoil over succession. King Abdullah is 87 this year, but his half brother and designated successor, Crown Prince Sultan, is 86. To put it kindly, though Sultan can still stand, life is essentially one long senior moment -- he will never be capable of running the country. The apparent next in line is Sultan's full brother, Prince Nayef, 77, the hard-line minister of interior, best known for publicly claiming the Sept. 11th attacks were carried out by Jews.

But the turmoil goes far beyond the monarchy's top ranks. It is increasingly apparent that Abdullah and the 19 other surviving sons of King Abdul Aziz, the founder of "modern" Saudi Arabia who died in 1953, are either too old or do not have the experience or acumen to manage the affairs of the kingdom for much longer. Succession has to go to their sons, the grandsons of Abdul Aziz. However, an important question looms: Which branch of the Saud family will emerge on top?

There is, according to sources within the royal family, a deal emerging. The sequence of events is not clear, but changes could start soon. First, Crown Prince Sultan will give up his long-held post of defense minister, handing the portfolio to his son (and Bandar's half brother), Prince Khalid bin Sultan, currently the assistant minister and previously commander of Arab forces during the 1991 liberation of Kuwait. Khalid's epaulets are large, but his military credentials are weak -- his leadership during the recent skirmishes against rebels in the border area with Yemen was marked by a series of tactical blunders. But Sultan's entourage is insisting that Khalid replace his largely incapacitated father.

A second change will be the retirement of Prince Saud al-Faisal, 69, the son of the late King Faisal, as foreign minister. Saud, an Arab nationalist, was once described in an official British briefing document as "very bright but perhaps not so bright as he thinks." He suffers from Parkinson's disease as well as a bad back and in photos often appears as though he is in agony.

The foreign-minister position will go, the sources say, to Saud's younger brother Turki al-Faisal, 65 -- keeping it, in feudal style, in the hands of the al-Faisal branch of the family. Prince Turki served for many years as the Saudi intelligence chief until he was sacked in 2001 -- 10 days before the Sept. 11th attacks -- and then later as a successful ambassador to Britain before his short-lived and disastrous stint in Washington. Turki will once again be rehabilitated because he has intellectual talents and worldly connections that are in short supply in the royal family.

The changing of the guard will also reach the throne: Saud and Turki's 69-year-old brother Khalid (not to be confused with the crown prince's militarily hapless son Khalid) will most likely emerge as a future king. Khalid is a poet, an enthusiastic painter, and a friend of Britain's Prince Charles. He previously served as governor of the mountainous and politically volatile province of Asir and is the current governor of the holy province of Mecca. Most importantly for his political future, Khalid has emerged as a figure respected by the various factions within the family, able to guide the kingdom forward with a steady hand.

As always, there are a few loose ends in this scenario. Prince Nayef is expected to be made crown prince upon Sultan's death or even before. However, he is said to be still recovering from a bout of cancer, which could mean he would not become king. His full brother Salman, 74, the governor of Riyadh province and every foreign ambassador's favorite to be king, is also apparently disqualified by a weak heart.

Bandar's exact role remains to be seen. As the son of a former slave girl in his father's court, he lacks the pedigree to be king himself. But he is married to an al-Faisal princess, and his connections in Washington make him a valuable ally for any would-be monarch. Within the family, he can explain the folly of internal royal dissension in a region increasingly threatened by Iran. Amid all the rumors and innuendo, insiders agree on one concrete fact: Bandar is back as a player in Saudi politics.