Accessibility links
For Halloween, TV Scares That Are Still Kid-Friendly The season is here for small-screen spookiness. And kids, especially, love to be scared. But where do writers and producers draw the line between fun-scary and too scary? Writers for Nickelodeon and PBS explain how they make sure "boo" doesn't turn into boo-hoo. 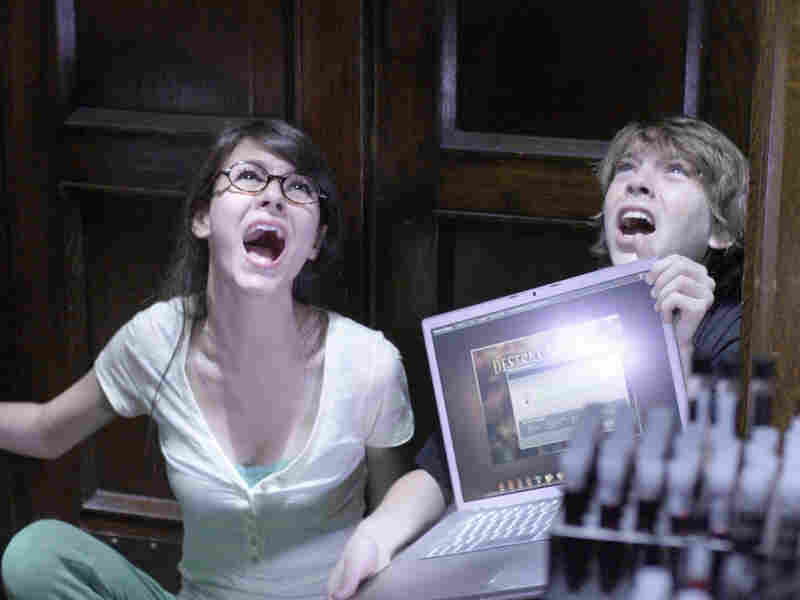 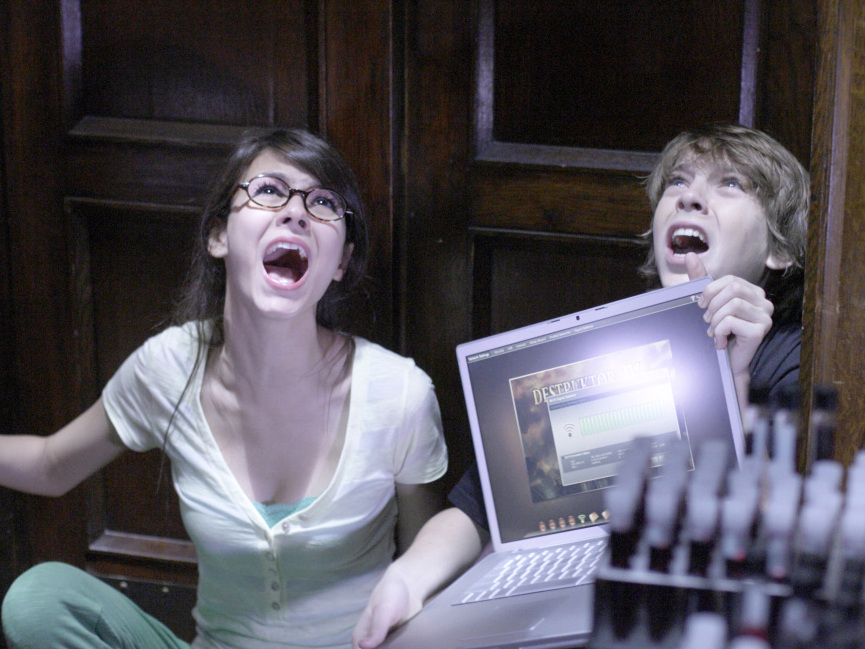 Jordan (Victoria Justice) and Hunter (Chase Ellison) get a good scare in Nickelodeon's new feature The Boy Who Cried Werewolf.

From 'The Boy Who Cried Werewolf'

'What Are You Doing Here?'

'Are You All Right?'

TV shows are rolling out the spooky stuff for Halloween, trying to lure viewers who crave a good scare.  But when it comes to children's programming, what's too scary? How do the writers and producers of kids' TV know when they've crossed the line?

I was about 8 or 9 the first time I saw a TV show that did more than just scare me. And Dark Shadows petrified me.

For Lauren Levine, a senior vice president at Nickelodeon, "It was Doctor Who in the U.K. on BBC. I used to watch it from behind the couch."

Since then, Levine has become almost "addicted" to that feeling of being scared. For children today, she says, it's no different.

"Their first game is hide-and-seek, which scares them to death," Levine says. "And the suspense ... is something we can't forget."

There's plenty of that in the new Nickelodeon feature The Boy Who Cried Werewolf. Haunted mansion? Check. Creepy hidden lab? Check. At Nickelodeon, says Levine, "we really try and play off every old horror-movie cliche."

The Boy Who Cried Werewolf is ultimately a comedy -- but the werewolves are pretty scary. So when is something too scary for kids? For Levine, it's "when the kid screams and runs out of the room."

Your Deepest, Darkest Fears: It's Okay, You Can Tell Us. It's Halloween.

That's Nickelodeon. Over at PBS, they're more cautious. On the public broadcaster's venerable children's show Arthur, one of the Halloween episodes is about how kids react differently to things that are supposed to be scary -- Arthur, the show's aardvark hero, being most afraid of a comic book called The Grotesquely Grim Bunny, which gives him nightmares.

It's the product of a careful calculus, says Jacqui Deegan, an executive producer on the show.

"We have advisers and educators help us apply parameters [that help] not to make the shows too scary," Deegan says.

True, the animators are adults, and sometimes they get a little over-enthusiastic.

"They did their jobs so well that there were definitely places where we needed to pull it back," Deegan says. "There was a doctor who had a knife in his hand, and I asked [animator] Greg Bailey, 'Can we please change it?' And ... now it's just some unidentifiable implement."

"One of the reasons kids respond to animation is because it's abstract," he says. "It's not a wicked witch standing there. It's brightly colored. It's your friends. People you see everyday." 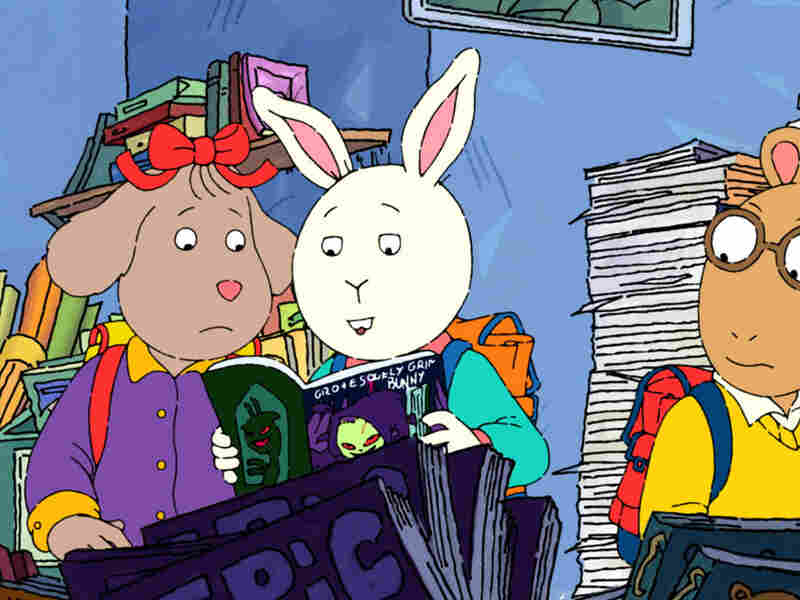 In the Halloween episode of Arthur, Arthur is embarrassed to admit he is scared of the new, darker comics popular among his friends. WGBH/Cookie Jar Entertainment Inc. hide caption 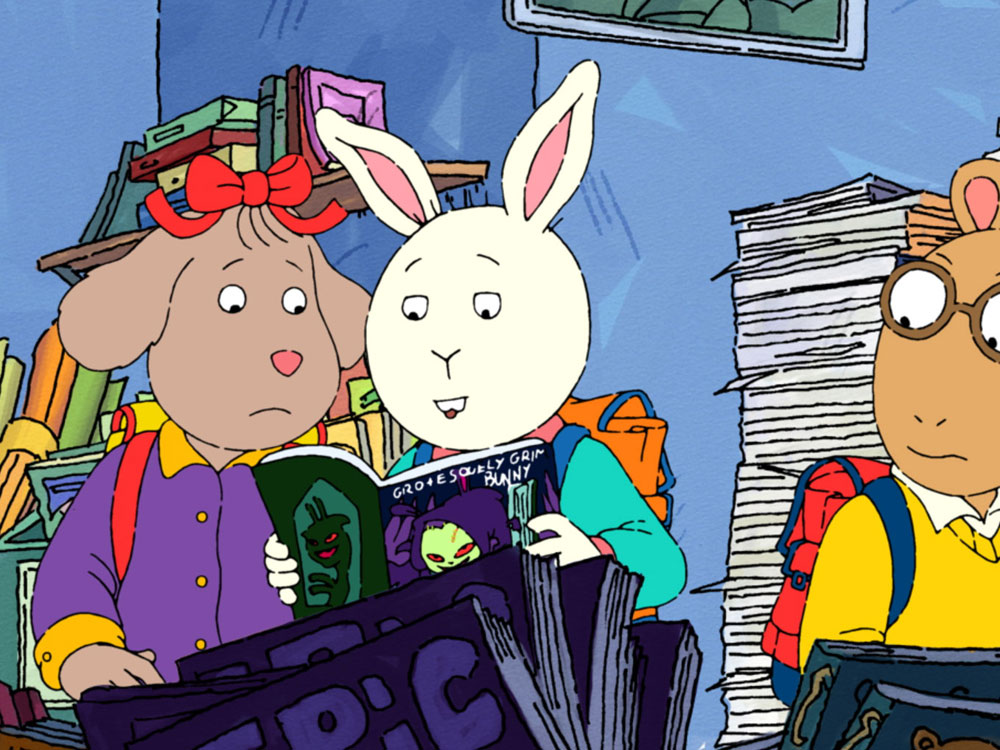 In the Halloween episode of Arthur, Arthur is embarrassed to admit he is scared of the new, darker comics popular among his friends.

Watch A Scene From 'Arthur'

The friends in the Halloween episode of Martha Speaks, a PBS Kids show about a talking dog, tell each other ghost stories on a rainy day. Scarborough, who is the show's head writer, says they used the episode to teach words like "phantom" and "ominous."

He also says, though, that you never know what's going to scare kids. He learned that the hard way several years ago. When he worked on Arthur, an episode had bossy-girl Francine accept a bet that she could be nice for one week.

"You could see her bottling up her feelings all week and not saying anything mean," Scarborough explains. "And the brainy kid said, 'Hey, that's not good,' and he showed the other kids what can happen, and he shook up a bottle of soda pop. And the top flew off."

Then, in the other kids' imaginations, Francine's head pops off — and goes flying through the air, landing in a neighbor's yard.

"We got letters up and down," Scarborough says. What was meant as a joke became a lesson in writing TV for kids.

"The 'scary episode' is not going to scare kids," he says. "What's going to scare them is the show the next day about something completely innocuous."

What that scary thing will be, as Scarborough discovered, is something that even the best advisers might miss.