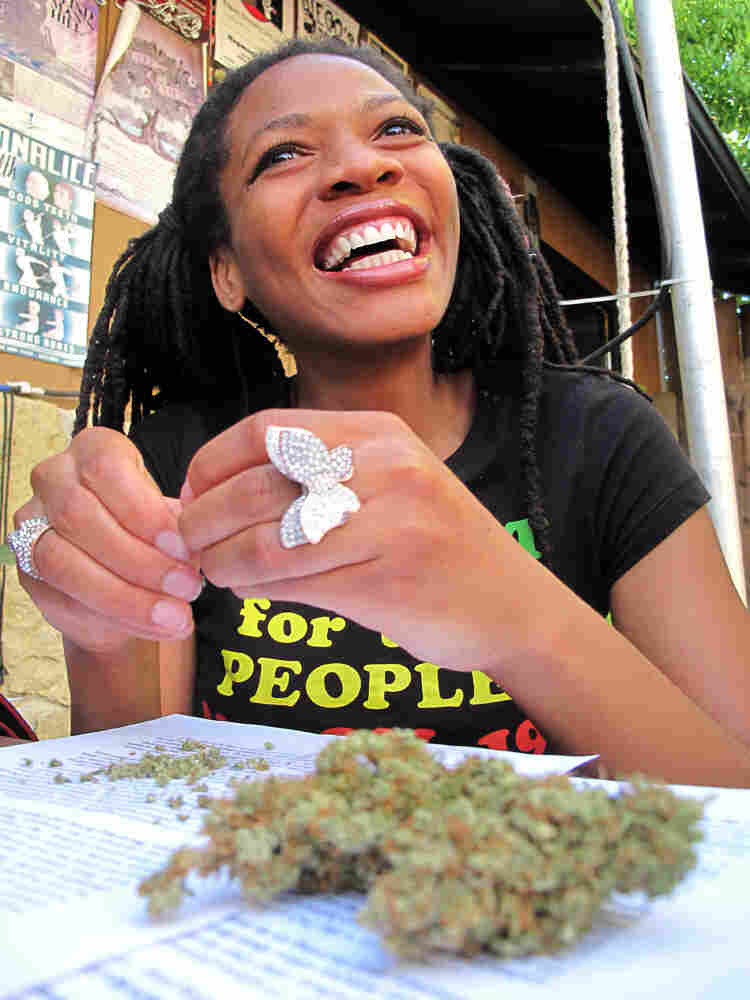 The debate over the California initiative to legalize marijuana has formed some unlikely alliances. On one side, some stoners and marijuana growers oppose Proposition 19, while some cops and mothers support legalization.

Californians will vote whether to make recreational marijuana legal on Nov. 2. Currently in the state, anyone with a doctor's recommendation can use pot as medicine, but this initiative would allow local and state government to tax and regulate all marijuana.

"I get stoned every day," she says through clouds of marijuana smoke.

De la Luz is a marijuana connoisseur for West Coast Cannabis and Skunk magazines, and TV's Cannabis Planet. She has a monthly column called "Getting High with Dragonfly," in which she reviews the latest flavors of ganja.

"My favorite strain these days has to be Dr. Walker's Daze," she says. "It's a pretty epic mood elevator. You're instantly happy, and you stay happy."

De la Luz says she was excited at first to hear California was trying to legalize pot. "I thought it was a dream come true," she says. "Then I read it and realized it was a nightmare."

I thought [Proposition 19] was a dream come true. Then I read it and realized it was a nightmare.

She's now actively campaigning with her group "Stoners Against Prop 19." She says the initiative would create too many restrictions: Californians would be able to legally possess, process, share or transport only one ounce of pot. And they would be able to grow it only in a 25-square-foot area.

"These exotic strains that we know and love are going to quickly become obsolete because a 5-by-5 space is just not enough space to breed and experiment with all these new strains," she says. "It would be a real shame if we lost all of this variety."

Proposition 19 allows local governments to license commercial marijuana companies, which worries self-professed stoners like de la Luz.  "We're kind of like anti-Wal-Mart and anti-McDonald's," she says. "So for them to try to sneak in and turn cannabis into a corporation, that's disgusting."

As the election nears, de la Luz has been debating opponents and trying to convince other pot smokers. Her arguments worked on a man who calls himself Ali Baba, who's in California for the marijuana harvest season and stopped by to share a few joints.

Is Medical Marijuana Legal In Your State?

"This particular cannabis, this Dr. Walker's Daze, this beautiful frosty sativa bud I'm holding did not come from a licensed dispensary," de la Luz tells him. "Under Prop 19, it would be illegal for me to possess and smoke this. It looks a lot more like freedom today in California than it would be if Prop 19 were to pass."

"Why would it be illegal?" Ali Baba asks.

"Because Prop 19 prohibits possession of cannabis that was bought anywhere other than a licensed dispensary," she explains.

"Wow," he says. "They're really trying to capitalize on this industry. You guys better vote no." 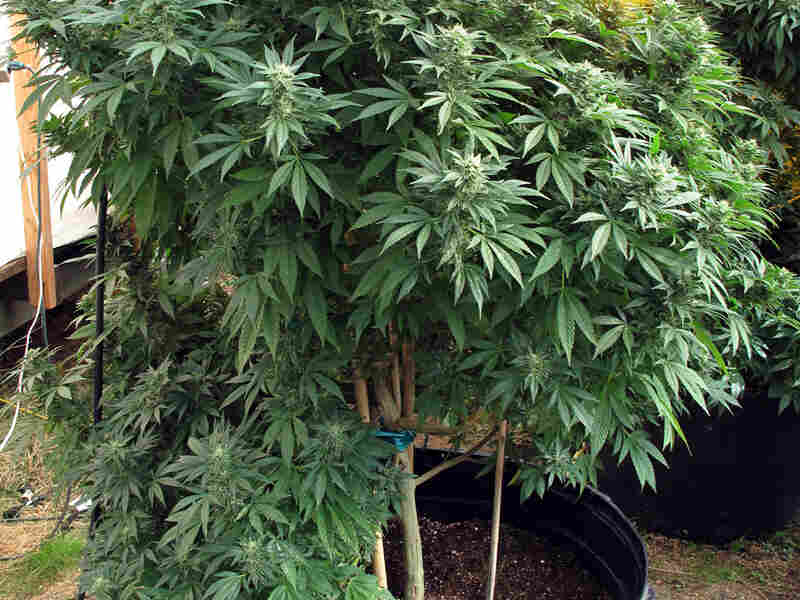 In Mendocino County, Calif., marijuana plants are a cornerstone of the local economy. Some growers worry that legalizing marijuana could lead to a devastating drop in price. Mandalit del Barco/NPR hide caption 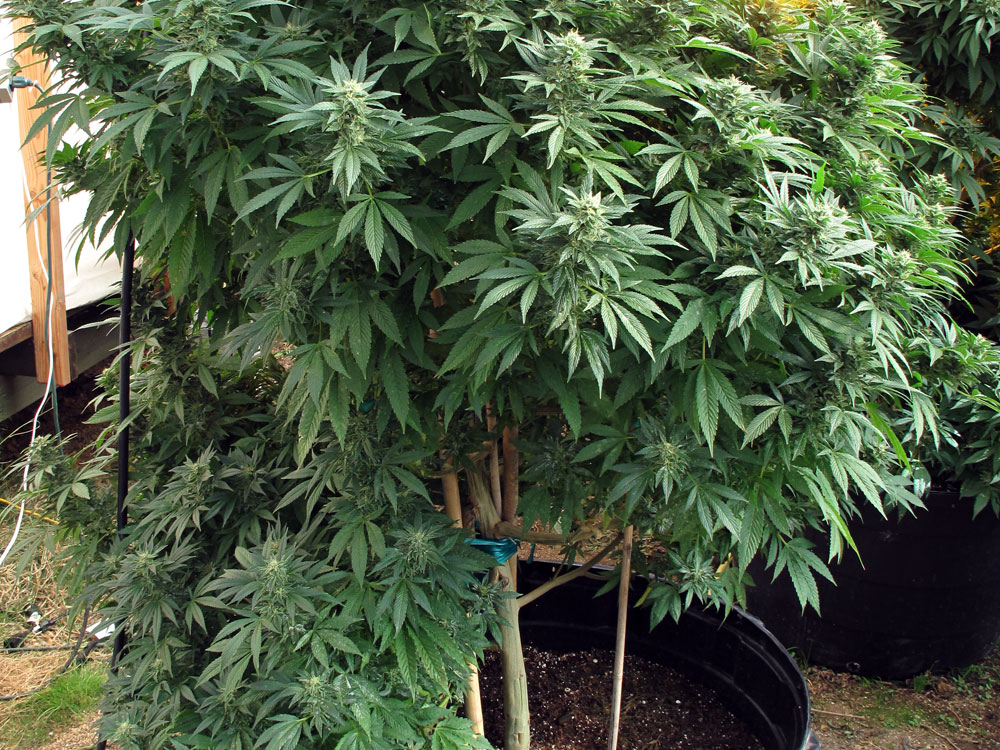 In Mendocino County, Calif., marijuana plants are a cornerstone of the local economy. Some growers worry that legalizing marijuana could lead to a devastating drop in price.

Wilson says he's a small-time grower who ekes out a living cultivating medical marijuana for himself and a collective. "It's borderline legal, illegal, gray-area stuff," he says, "breeding high strain, high quality, high medicinal marijuana in a sacred way."

Wilson says Proposition 19 would put him out of business. He wouldn't be able to grow enough to supply himself , much less the collective. And he'd have to pay taxes and fees to operate.

"They're going to tax the hell out of me," Wilson says. "And I barely make it as it is. I'm just getting by. They're taxing everybody they can, just because California is in debt. They see the money can be made, like unbelievable taxation, enough to push me out of business."

Another grower named Jay doesn't want to use his last name because part of his crop ends up on the black market. He cultivates his plants in his garage, like so many others in a cottage industry of mom-and-pop pot growers who fuel the economies of Mendocino, Humboldt and Trinity counties, known as the "Emerald Triangle" in Northern California.

Everyone's really scared of the prices going down. We all have invested money here. We all live here. I have a daughter here. My wife's a teacher.

Jay worries that legalization will flood the market as people grow their own marijuana and bigger businesses take over.

"Everyone's really scared of the prices going down," he says. "We all have invested money here, we all live here. I have a daughter here, my wife's a teacher. Everyone's scared because we don't know what the prices are going to be. Already, the prices have gone down and down. It's harder to sell it."

Like many who live off the grid in Mendocino, Michael Dork grows his pot outdoors. He says he doesn't want to live by anybody else's rules.

"I really don't want to be on the map. And I think it would affect the high. I believe more in being free of all that stuff," he says.

On the other side, Proposition 19 also has some unlikely allies; a group of former judges, prosecutors and cops are all for legalizing pot.

"No one in the history of marijuana use has ever died of an overdose from marijuana," says Stephen Downing, a retired deputy chief of the LAPD.

Do Looser Laws Make Pot More Popular? Not So Far

Downing says marijuana is less harmful than alcohol or tobacco. And he says arresting people for possessing marijuana is a waste of time for police; he says instead, they should be solving violent crimes and targeting those controlling the black market.

"Marijuana provides 95 percent of the cartels' profits," says Downing, citing the hundreds of murders along the U.S.-Mexico border attributed to the drug cartels. "And they're using the hundreds of thousands of gang members to bring about their distribution, their collections, their enforcement and their assassinations. We have a major, major violence problem, and if we take the cartels' profits away, we're going to start drying them up."

Downing says taxing and regulating marijuana would be a start.

William Cox is another member of Law Enforcement Against Prohibition, or LEAP. The former LAPD sergeant and L.A. county district attorney says officers are more likely to bust young African-Americans and Latinos on marijuana charges.

"The white kids are not swept up in this because they are able to have the resources to get out of it if they are caught," Cox says. Police officers often will let them off the hook if they catch them with a small amount of marijuana. "If they are white, middle-class and acting respectfully toward the officers, they're told to go home." 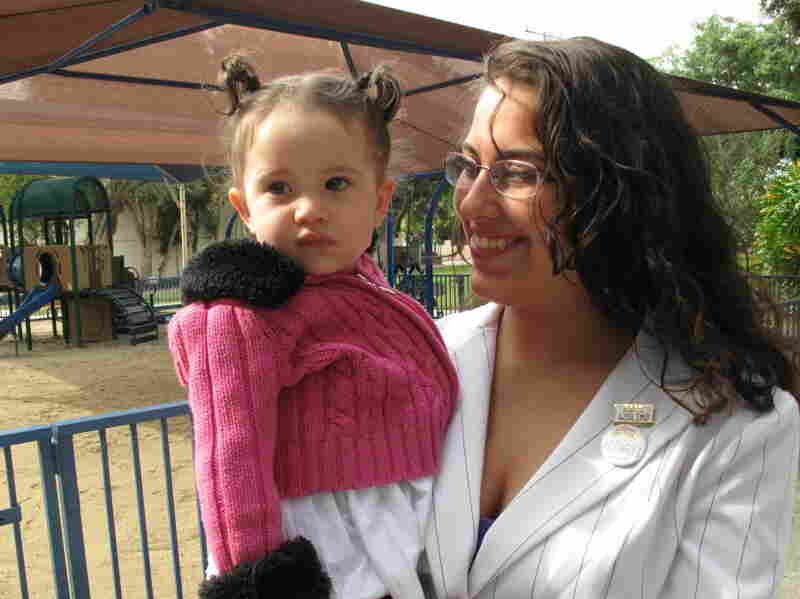 The push to legalize recreational marijuana has other unlikely supporters: moms.

A small group of mothers gathered at a children's playground in West Hollywood last week to advocate for regulation. Among them was Skyla Chapman, who brought her year-and-a-half-old daughter Isis to the "Yes on 19" event.

"When it's regulated, then it's no longer in the drug dealers' hands. It's in respectable businesses' hands. They'll card or ID you," she says.

Proposition 19 would ban smoking pot on school grounds and around minors. Only adults older than 21 could possess, cultivate or transport marijuana for personal use.

When it's regulated, then it's no longer in the drug dealers' hands. It's in respectable businesses' hands. They'll card or ID you.

Skyla Chapman, a mother who supports marijuana legalization in California

Marijuana activist Dale Sky Jones, who is eight months pregnant, says her group is following the lead of mothers in the 1930s who helped end the ban on alcohol.

"Prohibition ended because of moms," Jones says. "They knew the true danger from prohibition: violence, profits, illegality. This is an opportunity to end a failed policy."

Jones says Proposition 19 would put marijuana sales "out of the hands of criminals and in the hands of those that will control cannabis away from children."

If Proposition 19 passes, California would make history as the first state to legalize recreational marijuana. But with some moms for it and some stoners just saying no, it's a complicated issue that many voters are still trying to wrap their heads around.

An earlier version of this story incorrectly identified Chris Wilson as Dragonfly de la Luz's boyfriend. He is her friend.