Accessibility links
After Suicide, Pressure Grows For Rutgers Officials A month since the death of Rutgers University freshman Tyler Clementi, the university's president says the school did all it could do and did the right thing. But some activists say a climate of intolerance toward gays and lesbians persists on campus in the wake of Clementi's suicide. 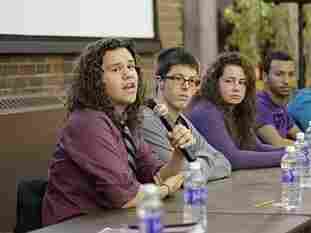 Matthew Ferran (left) and other Rutgers University students share their experiences of being LGBT (lesbian, gay, bisexual, and transgender) during a campus event organized in response to Tyler Clementi's death. Scott Tsai/Courtesy of The Daily Targum hide caption

One month since the death of Rutgers University freshman Tyler Clementi, gay activists at the university are still fighting for changes, even as life on campus returns to normal.

On Sept. 22, Clementi committed suicide after his roommate allegedly posted video of his sexual encounter with another man on the Internet. The tragedy sparked national discussion about bullying of gay youth.

Now, the TV cameras are mostly gone, and the debate over Tyler Clementi's suicide has quieted down.

"People make references to it sometimes. Should certain events remind them of it, it'll come up. But I don't think anybody really has a conversation about it at this point anymore," says Rutgers freshman Rachel McGovern.

Senior Frank Blaha thinks university administrators -- right up to Rutgers President Richard McCormick -- could have handled the Clementi situation better. "I think [McCormick] had a real opportunity to open up a dialogue about tolerance, and more than that, what is and is not acceptable behavior for the students of this university. I think they just let it go by," Blaha says.

McCormick has said very little about the events surrounding the suicide. 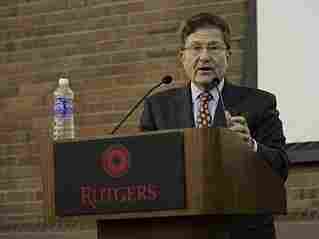 "I recognize that people wish we could say more than we're saying. But we're not able to do so while an investigation is being conducted. I'm sorry about that," he said, speaking briefly with reporters before a recent student assembly meeting. While most of the meeting was devoted to mundane concerns like parking and tuition, anthropology professor Robert O'Brien used the occasion to bring up the problems that gays and lesbians face on this campus.

"I get phone calls, e-mails, office visits, crying before class, crying during class, crying after class, as a result of the treatment that particularly lesbian, gay, bisexual and transgender students are experiencing. These things make them what I call a hidden population of Tyler Clementis," O'Brien said during the meeting.

Rutgers senior Aaron Lee told the group that the university does offer counseling services for gay, lesbian and transgender students like him. "Rutgers has great things, but sometimes it is very hard to find them. Not everyone is prepared to be in a position where they have to try multiple times to reach out for help," Lee said.

The real crisis is below the tip of the Tyler Clementi iceberg. It's the daily suffering of LGBTQ youth that is not appreciated by the wider society.

Lee and other activists repeated their call for the university to create gender-neutral housing and take other steps to make the lesbian, gay and transgender communities feel more comfortable. McCormick promised to consider those demands.

"We're not going to relax our commitment to making this a welcoming environment for everyone," McCormick said.

Pushing To Change, Trying To Move On

Not everyone likes the way gay and lesbian groups have responded to Clementi's suicide. Blaha thinks these groups should not be using the tragedy to advance their own agenda. "I think they were so out of line. If you wanted to hold a rally for tolerance, that would've been fine. But instead they tried to co-opt it for their own gain, so that they could get their own housing and dining halls, or whatever it was they were after," Blaha says.

Tyler Clementi And The Virtual Death Of Decency

But activists, including O'Brien, want to use the issue to maintain pressure on the university. "The real crisis is below the tip of the Tyler Clementi iceberg. It's the daily suffering of LGBTQ [lesbian, gay, bisexual, transgender, and queer] youth that is not appreciated by the wider society," O'Brien says.

As long as people keep talking about Clementi, O'Brien says he will keep pushing Rutgers to change. That may prove to be a tough sell on a campus that is largely trying to move on.