Accessibility links
Want To Clean Up At Poker? Study Physics Poker's a game of probability, statistics and modeling -- which makes it a perfect pastime for physicists. They're flocking to the game, and the best are winning millions. 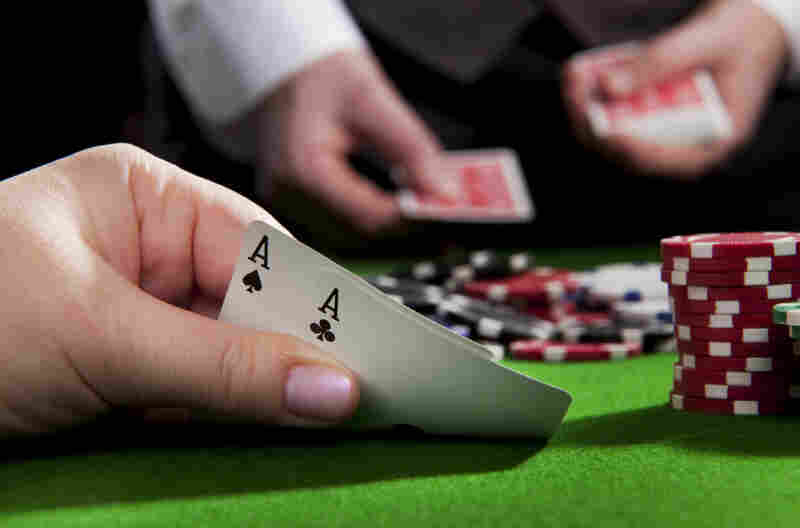 Researchers say one reason physicists are good at poker is because their brains are particularly attuned to thinking about probability, statistics and modeling. Mikko J. Pitkanen/iStockphoto.com hide caption

A few years ago, physicist Jeff Harvey invited Eduard Antonyan to a game of poker at a friend's house. Antonyan was a graduate student of Harvey's at the time, in the physics department at the University of Chicago.

"I invited Eduard to play because we're always looking for new victims," Harvey tells NPR's Guy Raz. "But it didn't exactly work out that well."

It turned out Antonyan was pretty good.

"He took my money," Harvey says. "We didn't invite him back after that."

Antonyan would eventually find other ways to play. Today he plays online, where he says he hauled in $10,000 on his best night. But what's interesting about Antonyan and Harvey is not how much they win -- but why.

Science writer Jennifer Ouellette is married to a physicist herself. Like Harvey and Antonyan, her husband also plays poker -- a connection that piqued her interest.

"At first I thought it was just a fluke," she tells Raz.

But a little research revealed there are a lot of poker-playing physicists, some of whom are pretty serious about the game.

In a recent article for Discover Magazine, Ouellette says one reason so many physicists are playing poker -- and playing well -- is that their brains are particularly attuned to thinking about probability, statistics and modeling. In physics, those things are crucial. And in poker, they just might give you a leg up.

"I mean -- when you think about it -- they build models of the world," Ouellette says of physicists.

When her husband plays, she says, he's trying to model his opponents based on their style of play -- from betting patterns to "tells."

"He's using that to build a model -- to predict them a little bit better."  That model, Ouellette says, can help physicists make better decisions about their own play.

Ouellette says that one reason poker is so intensely complicated -- and thus suited for physicists -- is that it's largely a game of probability.

"If you think about throwing one die, for example, you've got six possible outcomes," she says.

But add a second die? Suddenly your probabilities are a lot more varied: 36 possible outcomes to be exact.

Now take your model 52 cards, Ouellette says, and you've got more than 2.5 million possible five-card combinations. And if you're playing Texas Hold 'Em -- which uses seven cards? Around 133 million combinations.

Of course, there's no human brain capable of crunching those numbers mentally. But Ouellette says training in physics does help a player think about complex probability models in a deeper and more realistic way.

Harvey, whose specialty is string theory, says there's another advantage that physicists might hold over their opponents. It's called "tilt" and refers to the way players let emotions get the better of them when things are going badly.

"In physics, you have to be able to sit down and work on a long complicated calculation that may often take you weeks or even a month," he says. And sometimes, physicists have to throw that work out and start again when they realize their calculations are incorrect.

"Being able to deal with extended periods of bad luck or things not going well is something that's also required to be a physicist," Harvey says. "I think there is an element of emotional control that perhaps physicists learn."

It's been mathematicians, historically, who've held sway at the poker table, Ouellette says.

John von Neumann, the famous Hungarian mathematician and founder of game theory, based his work on two-handed poker.

"He was fascinated by the art of the bluff," Ouellette says. "And he founded game theory based on 'What do I think the other man thinks that I'm going to do?' "

When it comes to physics, she says, mathematicians have done a lot of the groundwork. "Physicists are kind of catching up, and realizing that there's a lot of interesting theory at play here."

And even though you may not have heard of most of the physicists playing poker today -- there's one you probably have.

As legend as it, the father of relativity loved to play craps and blackjack in Las Vegas, where he once met Nick the Greek, one of the greatest poker players of all time.

"Nick introduced him to all his gambling buddies -- knowing that they wouldn't know who Einstein was -- as 'Little Al from Princeton, controls a lot of the action around Jersey.' "