Accessibility links
Habeas Corpses Some people swore that the house was haunted.  One, Sheila Wainwright, even vouched for the validity of this claim in Judge Harrow's court.  The city attorney buried his head dejectedly in his hands for the entire performance. 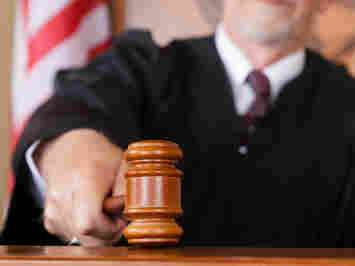 Some people swore that the house was haunted.  One, Sheila Wainwright, even vouched for the validity of this claim in Judge Harrow's court.  The city attorney buried his head dejectedly in his hands for the entire performance.  Why me, Jules Munroe thought, examining the slits of pink light crowding his vision. Why did I have to return to this God-awful hole-in-the-wall to practice law?  Munroe's paralegal gave him a swift kick under the table.  Glancing up, the young lawyer realized the whole courtroom was smirking at him.

"Care to join us Mr. Munroe?" Harrow playfully remarked, before self-consciously erasing his smile. "Your redirect, I believe."

Munroe eased his legs from behind the table as if he were a man decades older than the ancient Judge Harrow.  "Mrs. Wainwright, am I right to recall that this is not the first act of criminal mischief you have attributed to these . . . apparitions?"

"Them ghoulies have made a mockery of our town for six years and I'm the only one ain't 'fraid enough to say so.  I turned the other cheek when the fiends uprooted my prize daffodils, but smashing all the windows on the Bernstrom's fancy new yur-oh-pee-an sedan is simply too much."

"Six years," Munroe recited, "Six years of littering, vandalism, noise pollution, and property damage. Common signs of juvenile delinquency in most towns, but not here.  No, here we have a haunted house and spectral delinquents."

"Mrs. Wainwright, considering the old Bantham place has been uninhabited for 30 years, you don't think its a coincidence that you began to witness criminal manifestations only after your husband died?"  Munroe was absolutely fed up with asking this question, and the predictable answer.

"Jules, you know full well that I started the neighborhood watch after my Eugene passed.  Before that, I was too busy doting on my darling to take even the itsiest peek out the window."

"Then why do you suppose the frequency of delinquency linked crimes have remained steady?  Do you believe all the teenagers we previously charged without the benefit of your exonerating testimony were the innocent dupes of malicious spirits?"

"Judge, I formally request a private meeting with you and opposing counsel."  As Munroe uttered his next line in the shameless play the townsfolk had come to love, he met the victorious and unabashed eyes of Arthur Benjamin, the young man's defense attorney.

A few moments later, in Harrow's chambers, Munroe was on the verge of a nervous breakdown.  "I . . . I just can't comprehend why you allow this . . . this perversion of justice. We have the statements of schoolmates swearing that the boy was bragging, bragging of smashing those windows!" Munroe sputtered.

"And I have Mrs. Wainwright, who actually witnessed the crime," Benjamin retorted evenly.

"Boys, peace," Judge Harrow produced three highball glasses and began pouring. "This shall be the last time we find ourselves in this situation, I assure you."

"I assure you, you do," the judge declared.  "We are drinking to my engagement!" The lawyers exchanged confused glances.  "I am to marry the lovely widow Wainwright."

For the first time in months, Munroe felt justifiable relief.  Nothing was ever the same again after that.