Accessibility links
Youngest Detainee At Guantanamo Pleads Guilty Omar Khadr, accused as a teenager of killing an American soldier in Afghanistan in 2002, pleaded guilty to all five charges as part of a deal with military authorities. He had been facing a possible life sentence if convicted. 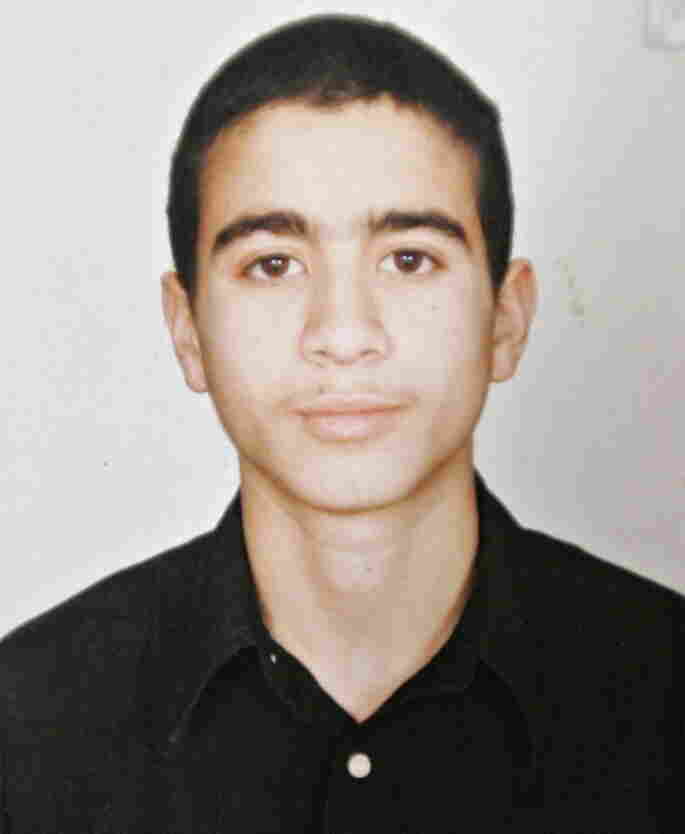 This undated photo of Omar Khadr was taken before he was imprisoned at the Guantanamo Bay military detention facility in 2002 at the age of 15. AP hide caption

The youngest detainee held at Guantanamo Bay, a Canadian accused of working with al-Qaida and killing an American soldier in Afghanistan, pleaded guilty Monday to all the terrorism charges against him.

Omar Khadr's decision to plead guilty to five charges, including murder, is a part of a broader agreement that will likely have him serving another year at the U.S. facility at Guantanamo in Cuba before he would return to his home country, Canada.

The deal was months in the making and provides both the Obama administration and Khadr a way to avoid a full trial that had cast a pall over both. The administration was under fire for trying a young man -- who was just 15 when he was arrested -- for war crimes in a military commission. The now 24-year-old Khadr, for his part, was faced with the prospect of spending the rest of his life in prison.

The plea agreement provided a graceful way for both sides to slip out of the corners into which they were painted.

Khadr's trial had started a couple of months ago, and he had pleaded not guilty to all the charges against him. Held at Guantanamo for eight years, he said he would never plead guilty to murder because he said he didn't throw the grenade that killed American medic Christopher Speer.

His attorneys appear to have convinced him that a jury of military officers at Guantanamo would not only find him guilty, but sentence him to life.

The plea agreement is still secret and it is unlikely to be released until later this week, after a sentencing hearing. Now that he has entered a plea, seven military officers will be asked to listen to testimony and decide on his sentence.

Sources close to the case tell NPR that Khadr agreed to serve an additional eight years in prison. He has to serve the first year at the U.S. facility in Cuba, and then he can apply for repatriation to Canada and serve the rest of his sentence there.

Secretary of State Hillary Clinton has spoken about the case with her Canadian counterpart, but neither side would comment on the record, aside for indicating that Canada agreed to take Khadr back. (His family lives in Canada. His father was killed in Pakistan during a shootout several years ago.)

Khadr is the last Westerner at Guantanamo and is the second prisoner to plead guilty in a military commission since President Obama came into office.

What happens to Khadr once he serves out his sentence? The Canadian government has promised to keep an eye on him and help him reintegrate into Canadian society.

But unlike many of the violent jihadis or al-Qaida members who have been tried recently, Khadr was not a late comer to the terrorist group. He literally grew up with al-Qaida. His father was a financier for al-Qaida and moved his family from Canada to Afghanistan when Omar Khadr was just a young boy.

For a time, Khadr lived in the same compound as Osama bin Laden and played with his children.

In the legal proceedings until now, Khadr's age had been a backseat issue. He was being tried as an adult for war crimes. The U.N. and human rights groups said that because he was a child at the time of the crimes, he should face a civilian court, not a military one. They also stressed that he was under his father's considerable influence when the crimes were committed.

Now, in the sentencing phase, his age becomes more important.