Accessibility links
No Opponent, But Big Money In Illinois Justice's Race He's running unopposed, but nearly $3 million has flowed into the race for Justice Thomas Kilbride's Illinois Supreme Court seat -- making it the second-highest-grossing judicial retention campaign in history. And, experts say, it could have a lasting impact on the independence of the court system. 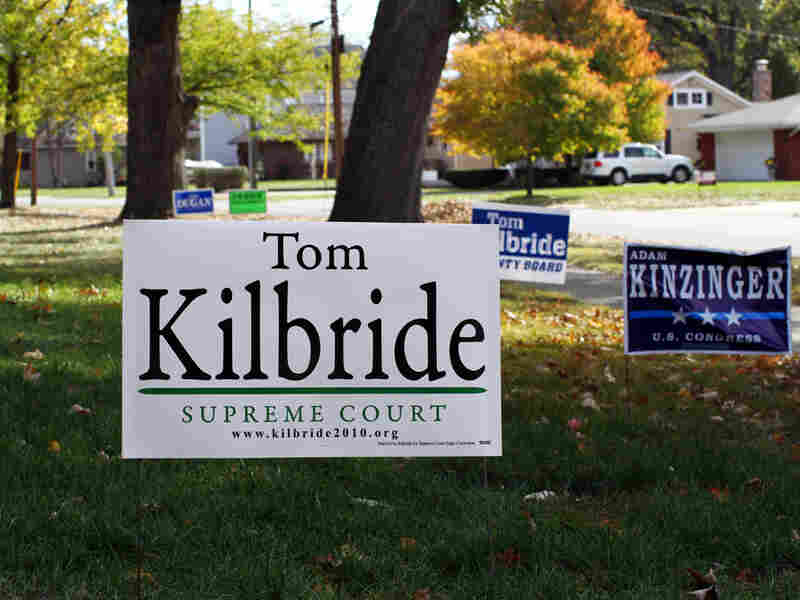 Illinois Supreme Court Justice Tom Kilbride is running for a second 10-year term on the court. So far, the race has been flooded with almost $3 million, and experts say the race's outcome could have a lasting impact on the court system's independence. Tom Bullock/NPR hide caption 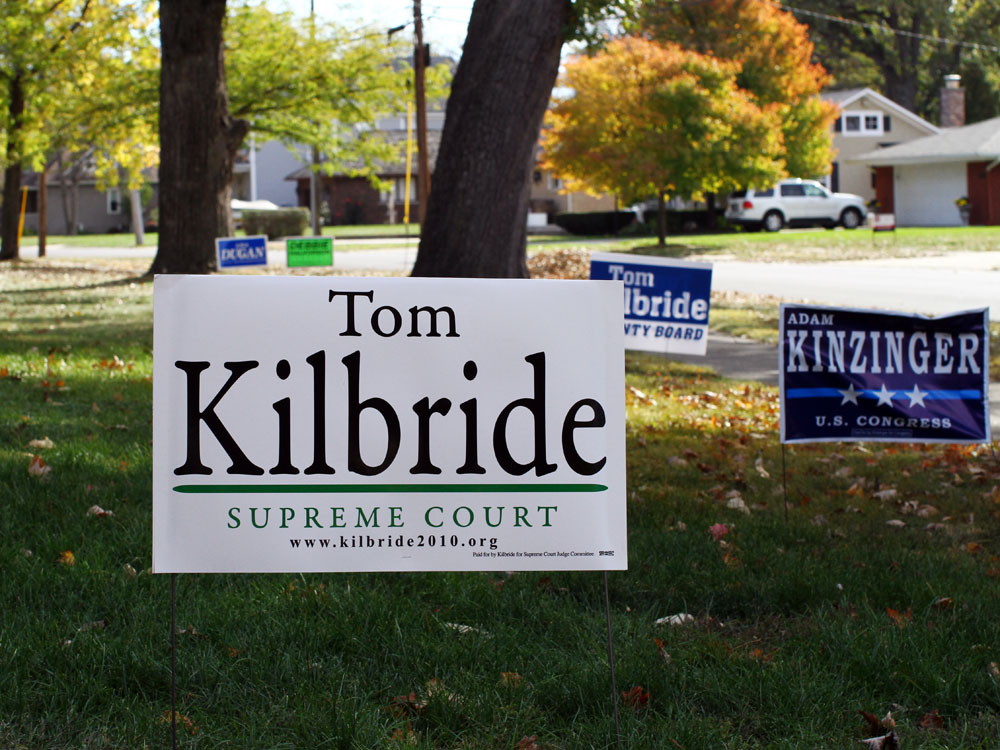 Illinois Supreme Court Justice Tom Kilbride is running for a second 10-year term on the court. So far, the race has been flooded with almost $3 million, and experts say the race's outcome could have a lasting impact on the court system's independence.

There's no shortage of hot political races in Illinois this year. The Senate seat once occupied by President Obama is up for grabs. So is the governor's mansion.

But it's a big-money campaign for the Illinois Supreme Court, in which Justice Thomas Kilbride is running without an opponent, that has good-government advocates shaking their heads.

Nearly $3 million has flowed into that race -- making it the second-highest-grossing judicial retention campaign in history. And, experts say, it could have a lasting impact on the independence of the court system.

'Does The Public Buy It?'

Cynthia Canary, who runs the Illinois Campaign for Political Reform, has been tracking contributions in the campaign. More than $2 million from the state Democratic Party and unions has gone to Kilbride. About $600,000 more from business groups is funding the opposition.

"We've got this notion embedded in our history that when judges sit on a case they're supposed to ... consider the law and not be swayed by campaign contributions or whom they know," Canary says. "But when you're talking about this kind of money, even a justice who is doing their absolute best to apply that kind of standard and to be neutral, the problem is: Does the public buy it?" 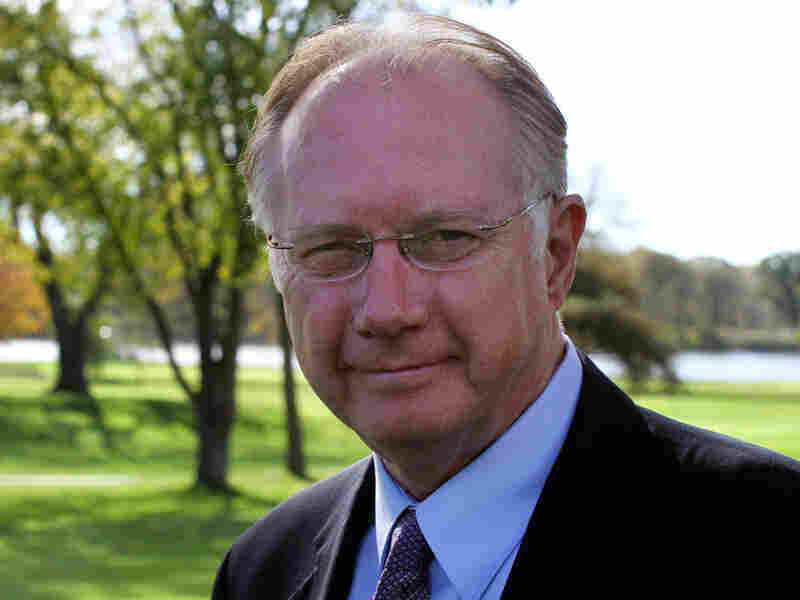 Even though Kilbride is running unopposed, his race to keep his seat on the Illinois Supreme Court has become the second most expensive judicial retention campaign in American history. Tom Bullock/NPR hide caption 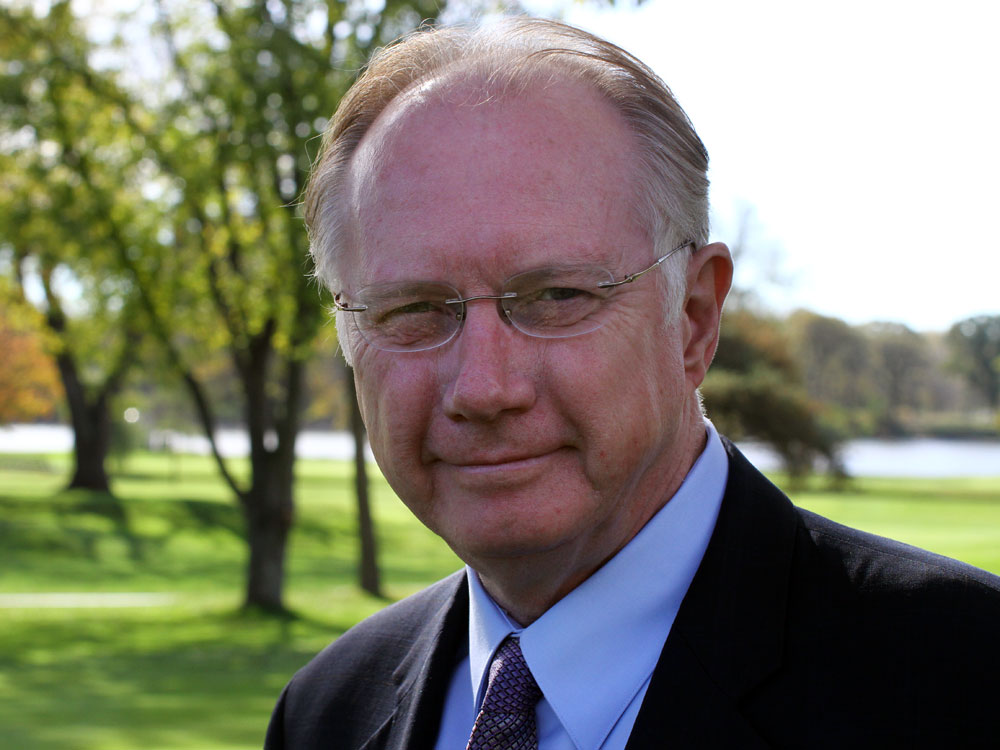 Even though Kilbride is running unopposed, his race to keep his seat on the Illinois Supreme Court has become the second most expensive judicial retention campaign in American history.

Kilbride, 57, is a 10-year veteran of the court who is trying to win another 10-year term. He's a former legal aid lawyer who once ran his own small law practice.

These days, he's running a careful sort of campaign, introducing himself to some of the sprawling district's 1.2 million voters at community events.

One morning last week, local political candidates and religious leaders sat side by side at the Kankakee Country Club in Kankakee, Ill., and dug into biscuits and gravy from the buffet while waiting for the 29th annual prayer breakfast to begin.

Mike Bossert, chairman of the Kankakee County Board, warmed up the crowd.

"Welcome all to Kankakee County," Bossert said. "I'm honored to have the opportunity to welcome you on this glorious, fall morning. October in Illinois -- sunshine, cool weather, harvest is done, $5 corn -- life is great, right?"

At A Glance: Thomas Kilbride

The 57-year-old Illinois Supreme Court justice was first elected in 2000 to represent the state's 3rd Judicial District, which includes 21 counties.

Family: His wife, Mary, is a math teacher at Augustana College. They have three daughters, Kate, Colleen and Clare, and one granddaughter, Isabel.

Actually, things could be better for native son Kilbride. Even though no one is running against him, he has attracted fierce opposition.

A few hours after the prayer breakfast, Kilbride drove to the convention center in East Peoria, Ill., to introduce himself to a group of probation officers and maybe pick up a few votes. Outside, Kilbride opened the trunk of his white sedan, which has become a roving campaign office.

"I've got a group of yard signs and the bumper stickers and the palm cards," he said.

Inside the convention center, Kilbride accepted an award on behalf of the Illinois Supreme Court, of which he is set to become chief justice this week. But if he doesn't win 60 percent of the vote on Nov. 2, the awards dinner in East Peoria could be one of his last official acts.

Ed Murnane leads the pro-business Illinois Civil Justice League, Kilbride's leading critic. Murnane rallied the business community after Kilbride voted this year against limits on medical malpractice claims. (Another Illinois Supreme Court justice who voted the same way in the medical liability case is also facing re-election, but, unlike Kilbride, he comes from a solidly Democratic district in Cook County, Ill., so the money hasn't flowed in his direction.)

At a community event posted on YouTube, Murnane laid out his case.

"It became obvious that Thomas Kilbride not only had the worst record on civil issues," Murnane said, "he also had a terrible record on criminal issues, and we thought the voters of Illinois who are being asked to send him back to the Supreme Court for 10 more years needed to know about his record."

Murnane canceled an interview with NPR, then didn't respond when asked to reschedule. But his political action committee has raised hundreds of thousands of dollars from business groups and manufacturers to run negative radio ads against Kilbride.

The ads include some violent content from actors pretending to be criminals.

"I was convicted of sexual assault of three different children," one ad begins. Another voice adds, "I was convicted of shooting my ex-girlfriend in the face and murdering her sister while our daughter watched. On appeal, Justice Thomas Kilbride sided with us over law enforcement and our victims. ... Vote no on retention of Supreme Court Judge Thomas Kilbride. It's way down on the ballot, but please make it a top priority."

The state bar association, retired judges and police groups have denounced the ads as unfair and inaccurate. Kilbride offered a more personal response.

Kilbride said those criminal cases dealt with procedural issues. And he says none of the defendants were released from jail or got lighter sentences because of his rulings.

The attacks have gotten so harsh that Kilbride has been asking himself whether he ever wants to run again after this race ends.

"I don't know about in the future [if] I'd want to do anything like this, the way it's evolved," he said. "I am where I am. Here's the point. It's not about me; it's about our court system. It's about the independence of the judicial branch." 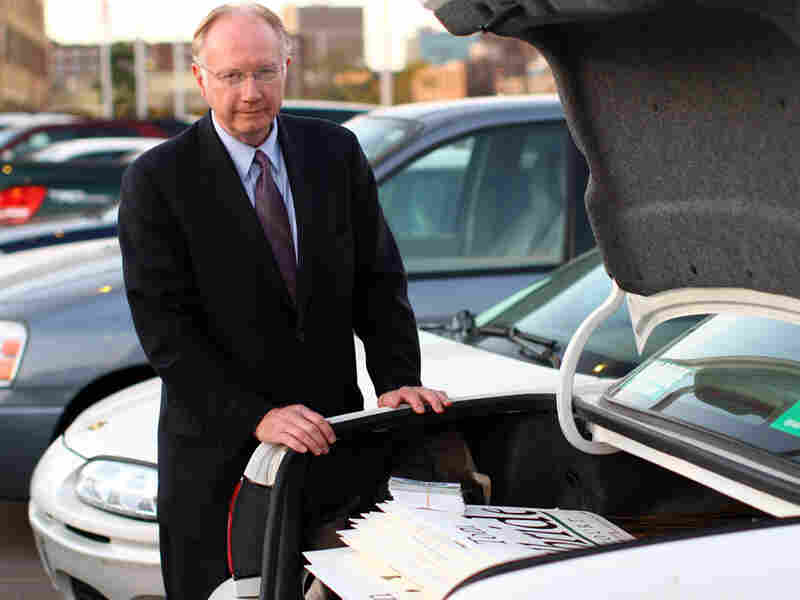 Kilbride's trunk is filled with yard signs, bumper stickers and other campaign material.  He calls it his "road office."  But his campaign is far from bare-bones: Kilbride has raised more than $2 million for his retention bid. Tom Bullock/NPR hide caption 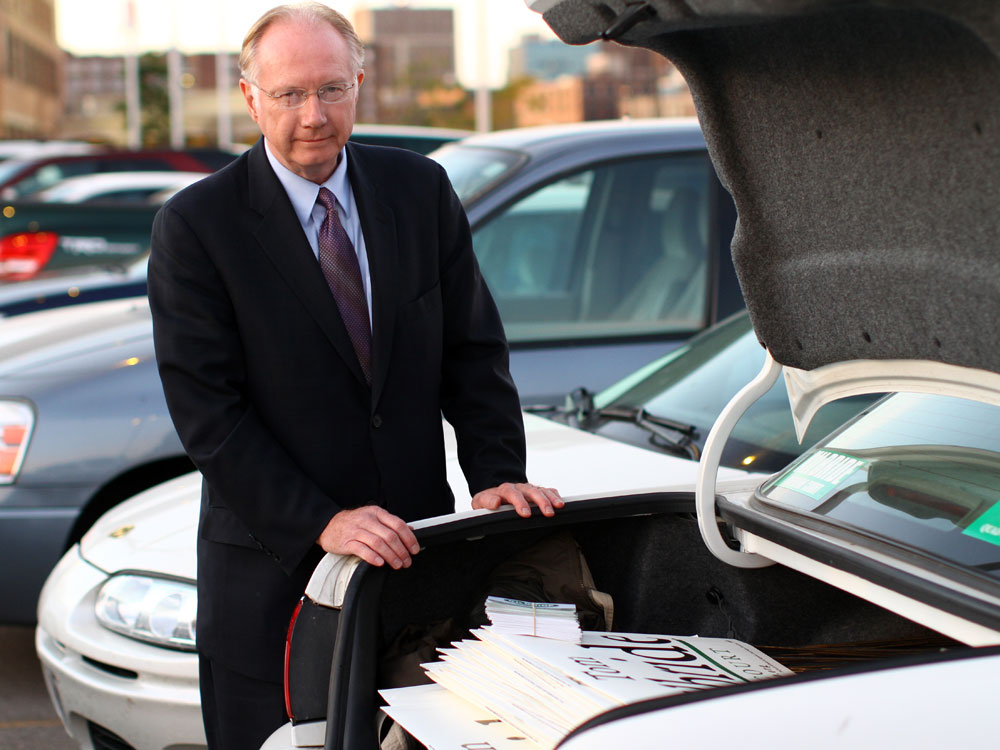 Kilbride's trunk is filled with yard signs, bumper stickers and other campaign material.  He calls it his "road office."  But his campaign is far from bare-bones: Kilbride has raised more than $2 million for his retention bid.

Yet Kilbride has raised more than double what his opponents have collected so far -- numbers that surprise some local voters.

At a shiny new ice rink in Kankakee last week, voter Jeffrey Naese watched his son play hockey in a nighttime league. Naese works full time, but he runs the Zamboni here in the evenings to pick up some extra cash.

"I would surely hope that million dollars would go toward something that would help out toward our community," Naese said.

Kilbride agreed. He said he'd prefer to drive around introducing himself to voters, not spend millions on television ads that feature law enforcement officers vouching for his approach on crime.

"Nobody would be raising any money but for the announcement months ago, if not a year ago, when Ed Murnane of the Illinois Civil Justice League made it clear he was going to raise a million and a half dollars to come after me," Kilbride said. "Now what am I to do ... sit still, lay down and roll over and just get trampled?"

Kilbride said the race is about far more than his career.

"If we are going to allow the courts to be politicized to this degree, where there's more and more big-time money coming in, it's going to ruin the court system and we might as well shut down the third branch," he said. "I mean that seriously."