Accessibility links
Along A Dangerous Border, 'Monsters' Lurk Driven by a social metaphor that makes District Nine's look veiled, Monsters is set in an E.T.-infested zone between the U.S. and Mexico, with our heroes braving low-budget but persuasively designed space monsters to get back to the good old U.S. of A.. 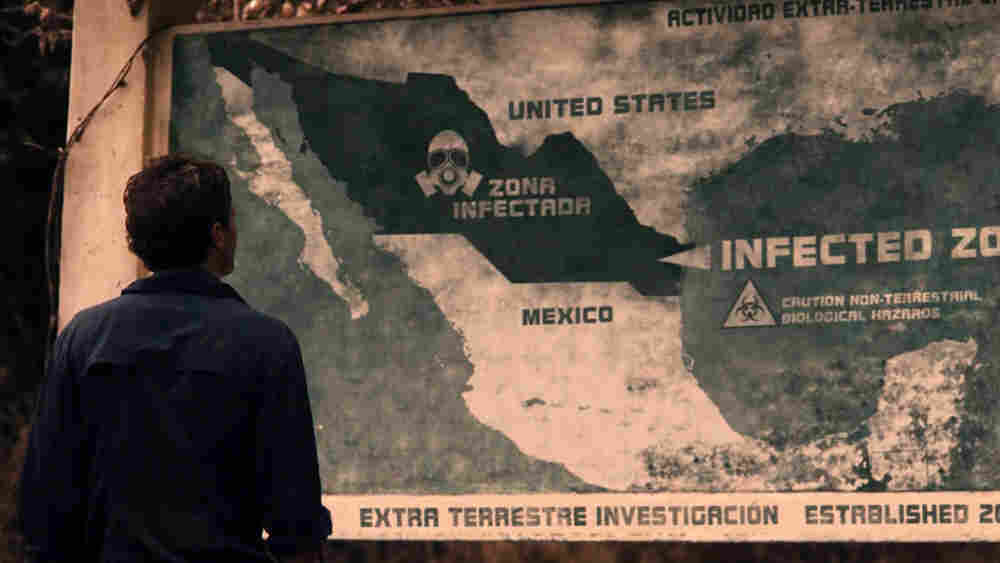 A Plan Problematic: Scoot McNairy stars as Andrew Kaulder, a photographer who must find his way through a quarantined zone inhabited by squidlike extraterrestrials to get out of Mexico and home to the U.S. Magnet Releasing/Magnolia Pictures hide caption 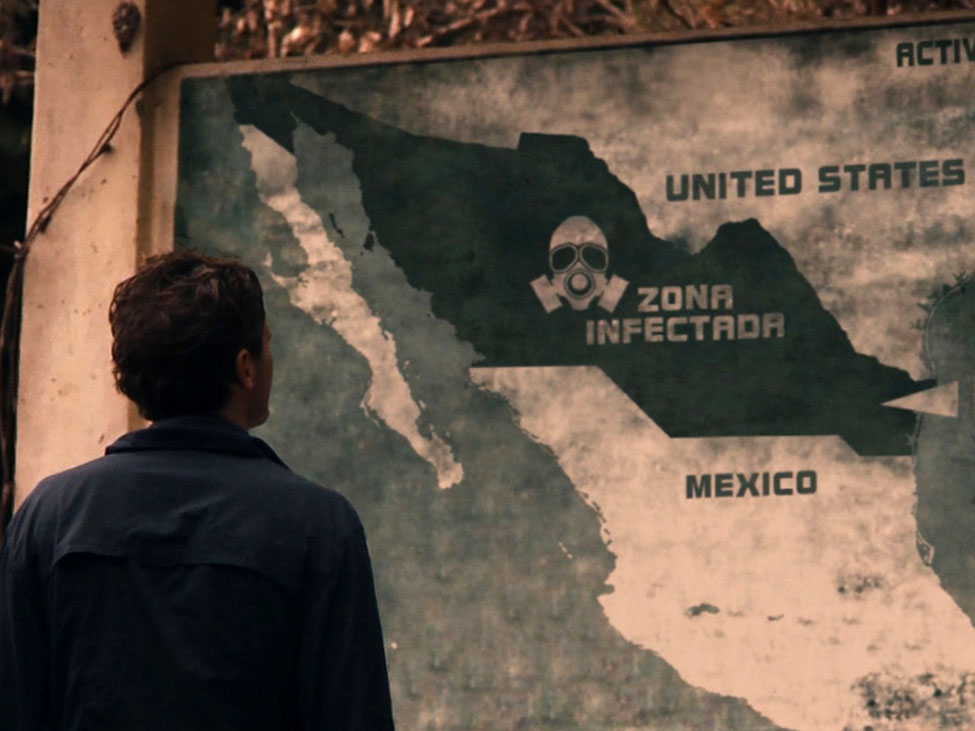 A Plan Problematic: Scoot McNairy stars as Andrew Kaulder, a photographer who must find his way through a quarantined zone inhabited by squidlike extraterrestrials to get out of Mexico and home to the U.S.

In English with some Spanish

First-time filmmaker Gareth Edwards is nothing if not frugal. His new movie, Monsters, called for some 250 special-effects shots depicting huge extraterrestrial creatures and an American city laid to waste. In Hollywood, this would cost millions of dollars. But Edwards had previously worked as a special-effects engineer in England, and he figured out how to do the effects on his laptop. Monsters ended up costing less than $500,000, yet it looks pretty persuasive.

Remember District 9, with all those human-sized "prawns?" Well Monsters has giant squids -- almost exactly in proportion, too. They're hundreds of feet tall, and not terribly friendly, though in fairness we humans haven't exactly rolled out the planetary welcome mat. As the film begins, it's six years since a NASA space probe crash-landed upon re-entry near the Mexican border, releasing a handful of alien life forms into the wild. Since then, we've apparently been doing our damnedest to exterminate them.

Not very effectively, mind you. They've colonized a swath of territory stretching from the Pacific Ocean to the Gulf of Mexico, roughly at the Rio Grande. And our heroes -- a news photographer (Scoot McNairy) and the boss's daughter (Whitney Able) he's promised to see safely home to New England -- are inconveniently on the Mexican side of that swath, with no easy way home.

Now, for the record, the little lady the photographer is reluctantly escorting is rich, so turning around and heading south for a nice vacation in Rio until the alien spawning season is over is a perfectly reasonable option. But she wants to get home (something about an engagement to a guy she doesn't seem to like much), and the photographer's a can-do kind of guy, so they head by land across the infested zone toward the U.S. border. It's a trip that would take just a few hours if mountain-sized aliens weren't stomping noisily around, increasing the task's degree of difficulty. 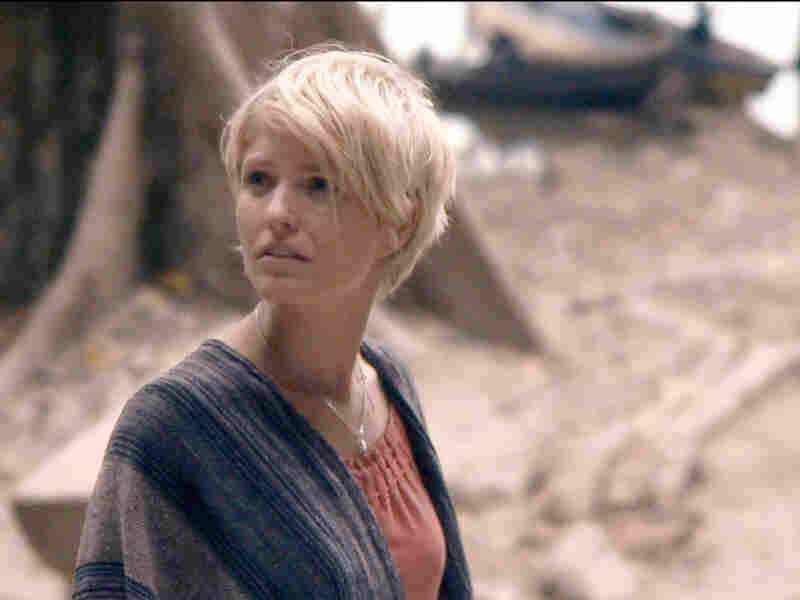 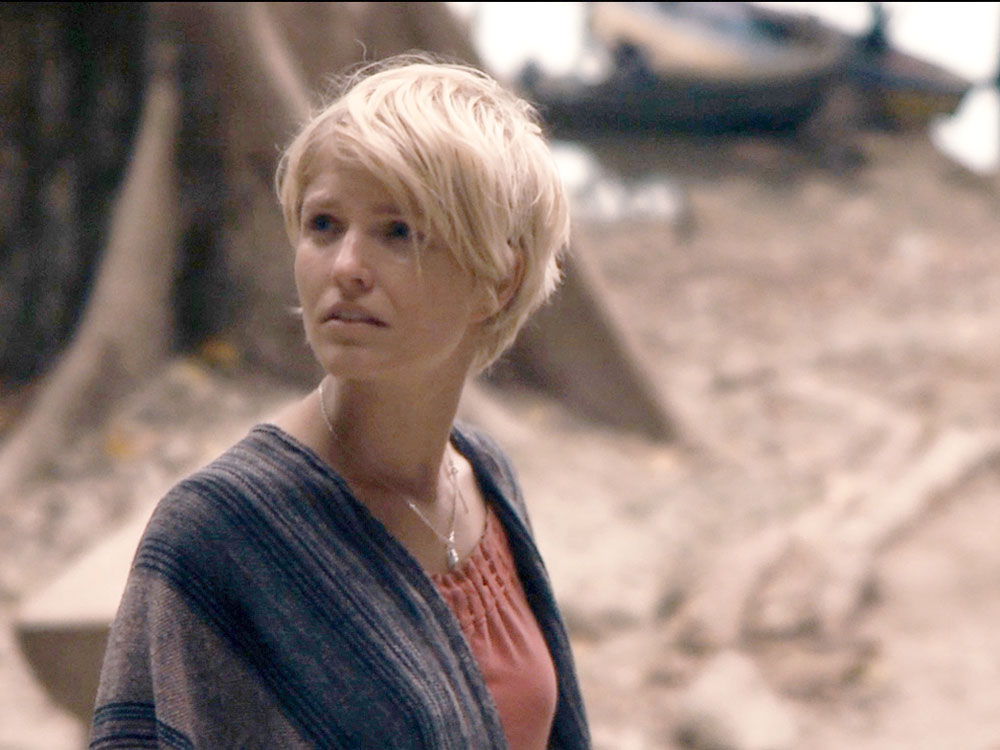 Whitney Able plays Sam, an unnerved tourist determined to make it home to the U.S.

All of this, let's note, is in the service of an obvious social metaphor -- one even less veiled than the one in District 9, which segregated its aliens in South African shantytowns. Here, the U.S. military has erected a huge border wall along the Rio Grande to keep aliens from, um, entering the U.S. illegally. "It's like we're imprisoning ourselves," says our heroine sweetly when she sees the wall,  just a bit before one of those huge squiddy things sends tentacles slithering toward her. On the other hand, where District 9 had the advantage of being able to dress up its social message with millions of dollars in special effects, Edwards has to make do in Monsters with a little indie-flick ingenuity.

That ingenuity, happily, is considerable -- nocturnal creatures that can only be filmed in the half-light of night; a story that starts six years in, after the creatures have already done lots of visually striking damage (battered buildings, boats nestled in tree limbs); the shooting of that damage in Galveston, Texas, shortly after the city was hit by a hurricane in real life? All very clever.

And Edwards is a wizard with his laptop's effects program. The squiddy things he conjures up look like the real deal -- thoroughly creepy and a gazillion feet tall. Too bad his screenwriting software didn't have an equivalently impressive plot-twisting algorithm to get him to the final fade. If he'd been able to conjure up an ending as persuasive as his monsters, he'd be all set.