Accessibility links
'Tea Party Express' Shakes Up GOP And The Movement Formed by a longtime Republican consultant in California, it has grabbed national attention with its cross-country bus tour and high-profile association with Sarah Palin and others. But some in the Tea Party movement see the Express as old-fashioned.

The Tea Party movement and the effect it's had on Republican Party politics this year has been one of the biggest stories of the 2010 midterm elections.

And among the prominent players within that movement has been the Tea Party Express. It's the creation of California Republican consultant Sal Russo and has drawn attention not only for some of its high-profile wins in GOP primaries but also because some Tea Party supporters say it's exploiting their movement to raise money and push an old-fashioned partisan agenda.

Russo seems quite satisfied with what he has accomplished so far.

"Every primary we've gotten engaged in, we've been successful," he says. "It's been a good string." 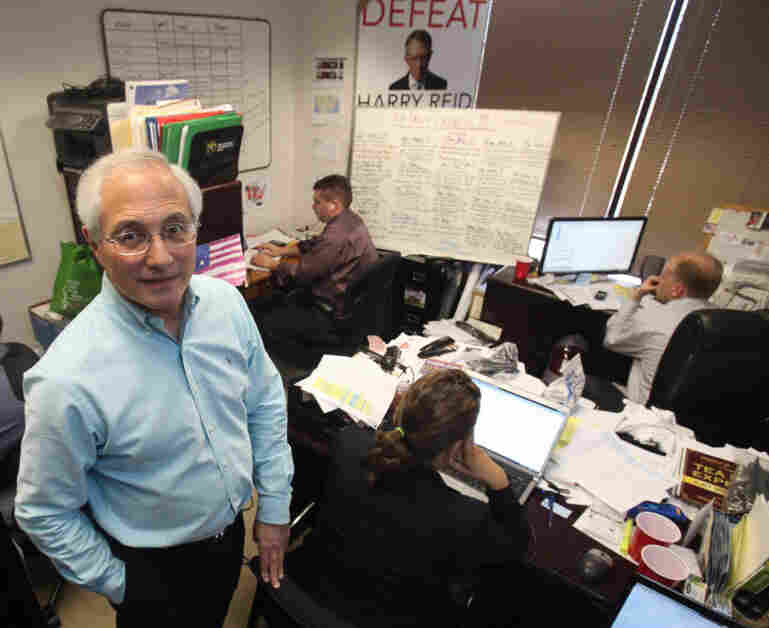 Russo, 63, has been in politics in California for his entire career. He's white-haired and bespectacled -- and is a genial guy who likes to tell a story.

Like the story about the kid from an Italian family full of Democrats who got into conservative politics in the 1960s. "My father about had a stroke when he found out I was working for Ronald Reagan," Russo says with a laugh.

Russo worked for Reagan when the actor turned politician was governor of California in the '60s and early '70s. After Reagan moved on to national politics, Russo stayed in the state capital, Sacramento, to start a political consulting firm.

In 2003, Russo was a driving force behind the successful recall of Democratic Gov. Gray Davis -- a recall that led to Republican Arnold Schwarzenegger becoming governor.

But now, with the Tea Party Express, Russo is sticking a monkey wrench in the Republican machine, says Ray McNally, another veteran GOP consultant in Sacramento. "Sal's saying, 'Well, the current Republican establishment isn't really the establishment that I want to be part of,' " says McNally, who has known Russo for 25 years. "Sometimes that means shaking up the establishment or the status quo, and clearly he's not afraid to do that."

Getting In On The Action

The Tea Party Express is the offspring of another Russo political action committee, which was focused on running ads attacking President Obama. That PAC, though, wasn't in on the action as the Tea Party movement began to form in 2009.

"We are ... sadly not part of the Tea Party establishment," reads an internal memo written by Russo's PAC at the time. One part of a suggested remedy: a national bus tour, called the Tea Party Express. That tour, which has drawn the likes of former Alaska Gov. Sarah Palin to its events, will have visited 19 states by next Tuesday's Election Day.

But some other some other Tea Party activists have complained the Express has just co-opted the brand. "We are a grass-roots organization and they are a Republican PAC based out of [a] Republican consulting organization," says Mark Meckler, co-founder of the Tea Party Patriots.

Russo's Tea Party Express has raised about $6.6 million, according to the Center for Responsive Politics. Much of that money has passed through Russo's consulting firm. He says, though, that he hasn't been turning a profit on the work.

"It's been done as a personal sacrifice," Russo says. "It's something we believe in."

Russo says he is focused on one set of interrelated issues -- the "growing intrusiveness" of the federal government, higher taxes, rising deficits and a "skyrocketing national debt."

"We don't care where you stand on [the] environment," he says of the candidates the Tea Party Express supports, "or same-sex marriage, or abortion, or the war. I don't even know where most of these candidates stand on these issues."

That approach, says McNally, has upset some in the Republican Party establishment because the Tea Party Express has helped put at least one candidate -- O'Donnell in Delaware -- onto a ticket and perhaps put that Senate seat out of reach for Republicans in the process. O'Donnell's campaign has been marked by surprises and gaffes and she now trails her Democratic opponent in polls by double digits.

The race has also tightened in Alaska, where Miller defeated incumbent Sen. Lisa Murkowski in the Republican primary. Since then, though, Murkowski has come back to mount a write-in bid, and polls signal that the race could be close.

There's still a week to go to Election Day, of course, and until then Russo's Tea Party Express rolls on.