Accessibility links
More Than 100 Dead After Tsunami Hits Indonesia The country's most volatile volcano began erupting hours after the wave pounded remote island villages and a day after a 7.7-magnitude earthquake. Health officials put the number of missing at between 150 and 500. 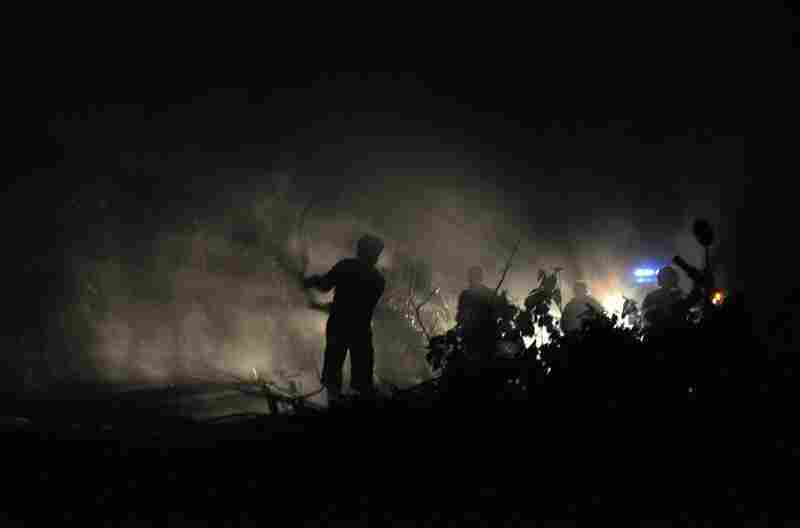 Indonesia's most volatile volcano began erupting and a powerful earthquake triggered a tsunami that pounded villages on remote islands off the western coast, killing more than 100 people and leaving as many as 500 others missing, officials said Tuesday.

The 7.7-magnitude quake struck late Monday along the same fault line that caused the massive 9.1-magnitude earthquake in 2004 and generated the deadliest tsunami on record, killing about 230,000 people in a dozen countries.

Vulcanologists said Mount Merapi rumbled and groaned for hours and then started to erupt just before dusk Tuesday, spewing hot ash. Scientists warned that pressure building beneath its lava dome could trigger one of the most powerful blasts in years. Thousands of residents on the slopes have been evacuated. But most who fled were the elderly and children, while adults stayed to tend to homes and farms on the mountain's fertile slopes.

"The energy is building up. ... We hope it will release slowly," government volcanologist Surono told reporters. "Otherwise, we're looking at a potentially huge eruption, bigger than anything we've seen in years."

The alert level for the 9,737-foot mountain has been raised to its highest level.

Monday's temblor hit 13 miles beneath the ocean floor near the sparsely populated Mentawai islands off the coast of Sumatra. A 10-foot-high wave surged ashore on Pagai Island, damaging most of the buildings there and sweeping away numerous residents.

We kept looking back to see if a wave was coming.

Rescuers were having a hard time reaching the islands because of strong winds and rough seas, but reports of damage and injuries were steadily climbing.

Mujiharto, who heads the Health Ministry's crisis center, said 113 bodies have been recovered so far. The number of missing was between 150 and 500.

The earthquake jolted Sumatra's western coast, including the city of Padang -- which last year was hit by a deadly magnitude 7.6 tremor that killed more than 700. Loudspeakers at mosques blared out tsunami warnings, and roads leading to high ground were quickly clogged with the vehicles of fleeing residents.

Indonesia, the world's largest archipelago, is prone to earthquakes and volcanic activity because of its location on the so-called Pacific Ring of Fire.

Getting to the Mentawais, a popular surfing spot 175 miles from the Sumatra coast, takes 12 hours, and the islands are reachable only by boat.

A group of Australians said they were hanging out on the back deck of their chartered surfing vessel, anchored in a nearby bay, on Monday when the temblor hit. It generated a wave that caused them to smash into a neighboring boat, and before they knew it, a fire was ripping through their cabin.

"We threw whatever we could that floated -- surfboards, fenders -- then we jumped into the water," Rick Hallet told Australia's Nine Network. "Fortunately, most of us had something to hold on to ... and we just washed in the wetlands, and scrambled up the highest trees that we could possibly find and sat up there for an hour and a half."

By daytime Tuesday, the toll from the quake and tsunami was rising.

Ade Edward, a disaster management agency official, said 23 bodies were found in coastal villages -- mostly on the hardest hit island of Pagai -- and another 167 people were missing.

Water in some places reached rooftops, and in Muntei Baru, a village on Silabu, 80 percent of the houses were damaged.

Some 3,000 people were seeking shelter Tuesday in emergency camps, Edward said, and the crews from several ships were still unaccounted for in the Indian Ocean.

"Everyone was running out of their houses," said Sofyan Alawi, adding that the roads in Padang leading to surrounding hills were quickly jammed.

"We kept looking back to see if a wave was coming," said 28-year-old resident Ade Syahputra.

NPR's Anthony Kuhn reported from Bangkok, Thailand, for this story, which contains material from The Associated Press.