No one expects African-Americans to vote in anywhere near their numbers from 2008, when their 65 percent turnout matched that of whites for the first time. But that isn't stopping Democratic organizers and supporting groups from using aggressive, even racially charged, tactics to get them to the polls Tuesday. 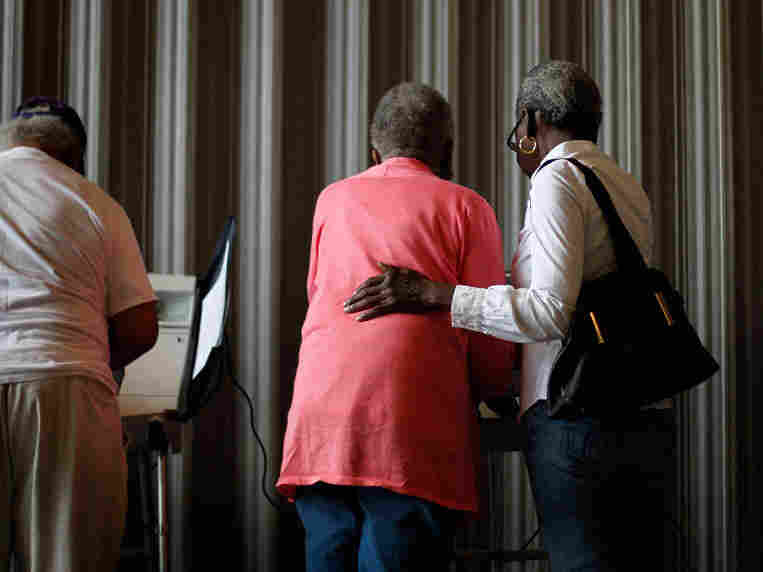 Marian Baker, 83, left, is assisted by Joann Lacy, 69, both of Atlanta, as she casts her ballot. David Goldman/AP hide caption

The Democratic Party, organized labor and civil-rights organizations are investing more money in campaign advertising and field work compared with previous midterm elections to break through widespread voter apathy and reach arguably the party's most loyal group of voters.

If trying to overcome the Republicans' strong momentum in congressional races isn't motivation enough, the Democrats have an added incentive this year: Several of the tightest congressional and gubernatorial races are in states with significant black populations, giving blacks in heavily minority districts an uncommon chance to tip statewide contests.

To rouse them, some organizers are applying aggressive tactics, including the use of openly racial invective directed at Republicans and Tea Party activists.

The brazen tactics reflect an increased willingness among some to throw sharper elbows this year, given the Republicans' potential to take control of the House and gain seats in the Senate.

Report: 'Black Voters and Candidates and the 2010 Midterm Elections'

The charged messaging appears to be a "fight fire with fire" counter effort to what Democrats and some political analysts describe as a racist undercurrent in the rhetoric from Tea Party activists and Republican candidates and pundits.

"I do have a sense that there is a very aggressive push," says David A. Bositis, senior political analyst at the Joint Center for Political and Economic Studies, a think tank on black political issues. "There is a level of intensity there that, I think, could be quite significant in terms of the impact on the election. ... The Republicans and the Tea Party have a lot of people associated with them who have said racist things. It's a situation where two can play that game. They are not going to lie down and play dead."

The Tea Party movement first raised hackles when some of its supporters questioned whether President Obama had been born in the U.S., a constitutional requirement for the office. In March, members of the Congressional Black Caucus said Tea Party demonstrators shouted racial epithets at them while protesting heath-care legislation outside the Capitol. One member said he was spit upon. Tea Party spokesmen have challenged those claims. 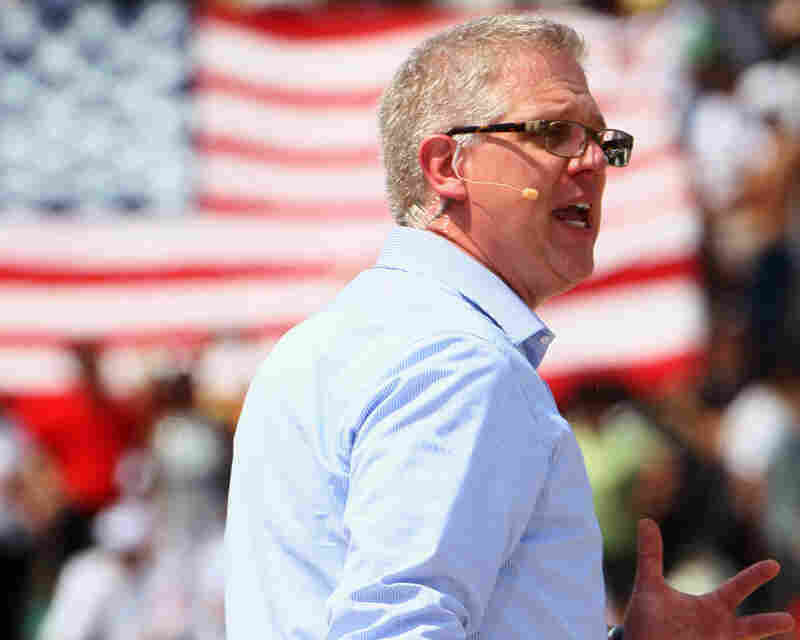 In 2009, conservative talk show host Glenn Beck called Obama a "racist" with "deep-seeded hatred for white people." In August, he defended his decision to hold a Washington rally on the anniversary of Martin Luther King Jr.'s March on Washington, by pledging to "reclaim the civil rights movement" from liberals. He said civil rights leaders had "purposely distorted Martin Luther King's ideas."

In July, the Tea Party Express ousted its chairman, Mark Williams, for writing a satirical letter from "Colored People" to Abraham Lincoln in which he, adopting the voice of slaves, told Lincoln "you were the greatest racist ever. We had a great gig. Three squares, room and board, all our decisions made by the  'massa' ... We don't cotton to that whole emancipation thing. Freedom means having to work for real. ... That is just far too much to ask of us."

'I Ain't Going Back To The Cotton Fields Of Jim Crow'

In Alabama, a recently recorded phone message targeting heavily black communities lays out an ominous warning before the narrator goes on to endorse Democratic gubernatorial candidate Ron Sparks and lieutenant governor hopeful Jim Folsom. The voice is that of an African-American state senator, an influential longtime politician in Alabama, who begins, "Hello, this is Hank Sanders ... and I'm still mad as hell."

"I say hell no!" he continues. "I ain't going back to the cotton fields of Jim Crow days. I'm going forward with Ron Sparks, Jim Folsom and others who will do right by all of us."

The Alabama "robocall" came in response to Republican candidates' pledges to roll back the health-care overhaul and other initiatives pushed through by Obama. Many black Democratic leaders see that as a threat to the legislation's promise of providing health insurance to millions of working-class blacks not covered by employers.

The Alabama Republican Party has accused Sanders of race-baiting. "It's pretty sad that the Democrat Party believes that the only way they can win in 2010 is to scare people with images of slavery and cotton fields," state Rep. Mike Hubbard, chairman of the Alabama Republican party, said in a statement. He called on Sparks and Folsom to denounce the robocalls. So far, they have not done so. Sparks has responded to questions about the calls by saying racism still exists in Alabama, The Birmingham News reports.

Sparks trails Republican Robert Bentley by at least 20 points, according to most polls, but Democrats hope the state's large black electorate can play a pivotal role in the down-ticket races. Maintaining Democrats' control of the state House, for instance, could turn on the outcomes of a dozen hotly contested seats.

African-Americans in Alabama usually make up as much as 24 percent of the turnout in a general election, and the overwhelming majority of them vote for Democrats.

Spreading The Word Via E-Mail

Separately, an e-mail circulating among African-Americans nationwide takes a similar swing at the right and calls Tea Party activists "hate mongers." It isn't clear if the message, with the subject line "Wake Up!!! Stop The Tea Party," was authored by a political organization. The e-mail is addressed to Democrats and urges them to vote on Nov. 2 "like our lives depend on it, because it does. The Republican party [sic] has been hijacked by dangerous, radical hate mongers called the 'Tea Party.' They are led by Glen [sic] Beck and Sara [sic] Palin [whose] only goal is to take down President Obama and the government.

"These people hate Blacks." it continues. "They hate Latinos. They hate Muslims and have at times made many anti-Semitic statements. They hate Gays. They hate any moderate Republican who might be likely to cooperate with Obama. Their rallying cry? 'We want to take back our country!!' Take it back from whom?"

Where The Black Vote Could Be Key

Polls signal tight races next Tuesday in many House, Senate and gubernatorial contests. Here's where some of those races are and the percentage of black voters. A strong turnout could affect the outcomes.

"These radicals could take this country back to Jim Crow and the hey-day of the [Ku] Klux Klan. Don't think it could happen? Just stay home on election day and see what happens to this country."

Beck has bridled at charges that he's racist or, at least, foments racial tensions. This summer he backed off his 2009 remarks about Obama, saying that he "miscast" the president's "philosophy and his theology" as racism, and now believes it is "liberation theology."

Palin hasn't gotten publicly caught up in much of the racial rhetoric. However, in August, after conservative talk show host Laura Schlessinger used the N-word repeatedly in an exchange with an African-American caller, Palin defended Schlessinger's right to free speech in a Twitter posting: "Don't retreat … reload."

Spending Big To Get Out The Vote

Blacks historically have turned out to vote at rates below the national average. But a recent survey conducted by The Washington Post, the Henry J. Kaiser Family Foundation and Harvard University showed that 80 percent of black Democrats are as engaged, or moreso, in the midterm elections than they were in the 2008 presidential election.

Likewise, Bositis says that his research recently released by the Joint Center suggests that Republicans' attacks on Obama, as well as blacks being well positioned to influence a number of close races, could drive black turnout higher than in past midterms.

The Democratic Party says it is spending more than $3 million -- its biggest commitment ever in a midterm cycle -- on ad buys targeting African-Americans. On Monday, the Democratic National Committee announced a new ad featuring R&B singer John Legend that will air in urban markets in Ohio, Pennsylvania, Florida, Missouri, Illinois, Wisconsin and on nationally syndicated radio shows with predominantly black audiences. 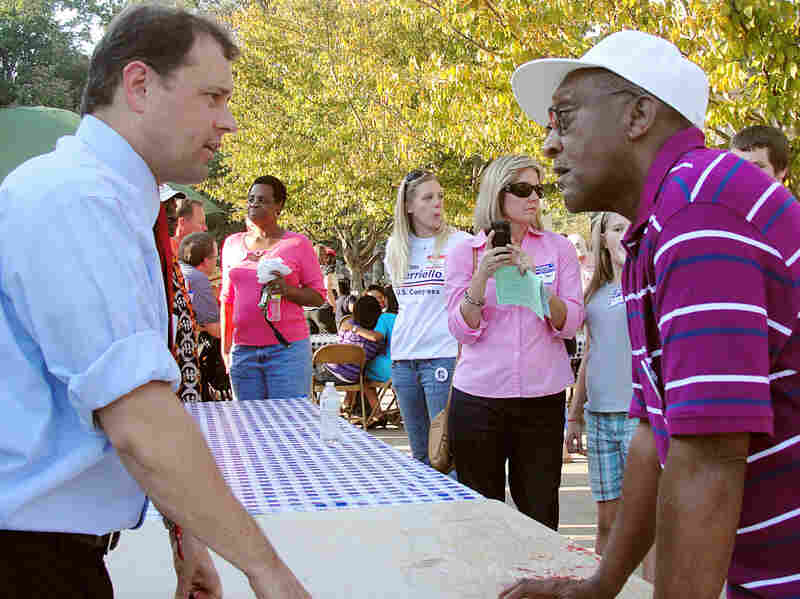 Charles Bailey (right) tells Rep. Tom Perriello (D-VA) that he's angry because the "change" President Obama promised in 2008 hasn't happened yet. Perriello's district is among those where the outcome could depend on which party does a better job at turning out its voters. Ken MaGuire/AFP/Getty Images hide caption

However, high-priced media blitzes aren't reliable for turning voters out, according to Emory University political scientist Andra Gillespie. "The results are a little bit mixed in my perch in Atlanta," she says. "If I listen to black pundits, there are still a lot of complaints that blacks have been ignored, both agenda-wise and electorally. ... You can't just rely on indirect forms of mobilization, like robocalls or radio ads. You've got to do the retail politics. You've got to talk to people. If you do that, there's strong evidence that your likelihood for turning out voters in future elections goes much higher."

In Michigan, where black turnout was 57 percent in 2006 and 64 percent in 2008, the Democrats are struggling to energize their base despite having committed several million dollars to the effort.

Much of the Democratic effort centers on Detroit, the state's power base for Democrats and black voters. That base is usually strong enough to keep Michigan's Democratic candidates in contention, if not propel them to victory. But at a rally in Detroit on Sunday, former President Bill Clinton drew a crowd of about 500 people, enough to fill only a third of the room. For a city that still adores Clinton, who once packed any venue there by the thousands, the thin showing illustrates the lack of excitement for Michigan's Democratic candidates.

At the top of the Democratic ticket in Michigan, Virg Bernero, the party’s nominee for governor, appears unable to stop the state from electing its first Republican in eight years. He trails Republican Rick Snyder by as many as 20 points, according to the latest polls.

Bernero's selection of African-American Brenda Lawrence as his running mate has done little to energize black voters or other Democratic loyalists. And he's had to overcome relative obscurity, as mayor of the small capital city of Lansing. Detroit's population is roughly 81 percent black and boasts more than 567,000 total registered voters. Midterm election turnout traditionally averages about 37 percent, and Democratic organizers are aiming for a turnout of 35 percent, or about 200,000.

"We've got quite a few groups that popped up over the last couple years since the 2008 election, young folks in the city who have formed their own groups and are working through their social-networking groups," says Eddie McDonald, who chairs the Michigan Democratic Party's coordinating campaign. "And we've got the churches running their own individual political action organizations and doing community outreach."

McDonald says the party is spending "millions" of dollars on outreach. Working against the Democrats is not only the low name recognition of the party's statewide candidates, but also the absence of hot local elections that drive up turnout. Instead, many voters are distracted by the particularly ruinous effects of the recession on Michigan. More than a third of Detroiters live below the poverty threshold, and Michigan's unemployment rate in September was 13 percent, compared with the nation's 9.7 percent.

The malaise among voters could pose problems for Obama and the Democrats in 2012, given Michigan's traditional role as a bellwether for presidential elections. Democrats admit the same could be true in other future battleground states, such as Ohio and Pennsylvania.

"You could end up having a heavier lift," McDonald acknowledges. "Michigan is still hurting from an economic standpoint. So there are things we still need to work on when it comes to ... finding something to use as a catalyst or some sort of rallying cry as we move toward the election in 2012."