Accessibility links
After Promotional Circus, Will Miami Pack The Heat? LeBron James' decision to join the Miami Heat this year was shrouded in less than tactful fanfare and self-promotion, which left many with a sour taste for James and his new team. But the talent and likely success of the Heat may turn those perceptions around. 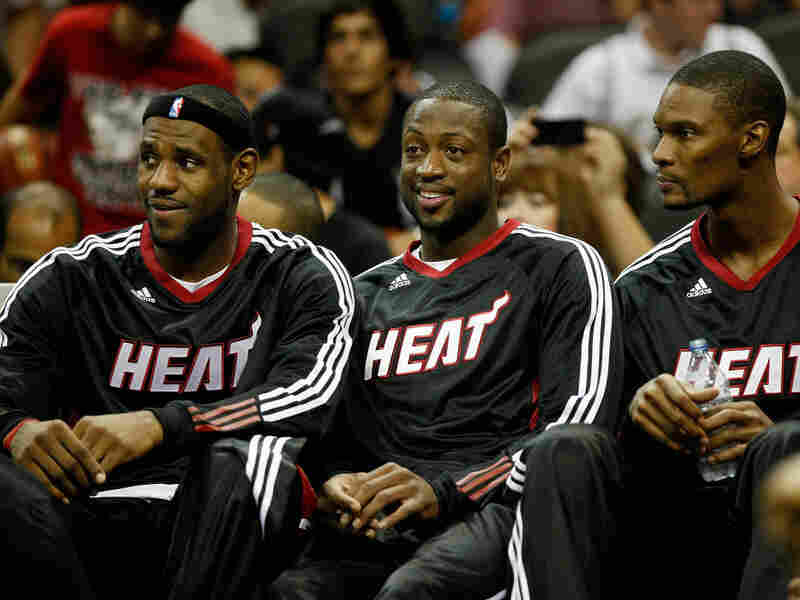 LeBron James (from left), Dwyane Wade and Chris Bosh of the Miami Heat sit on the bench during a game against the San Antonio Spurs. When James and Bosh joined the Heat this year, the team became a juggernaut of talent. Chris Graythen/Getty hide caption 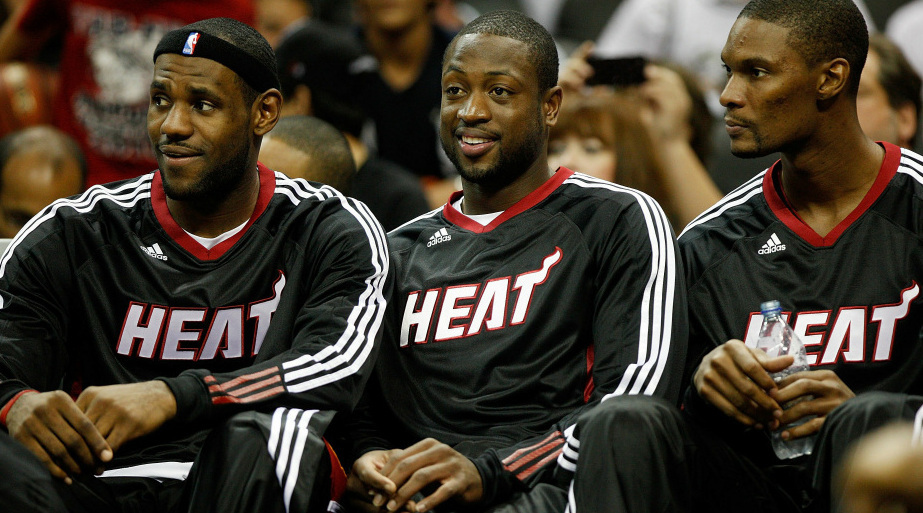 LeBron James (from left), Dwyane Wade and Chris Bosh of the Miami Heat sit on the bench during a game against the San Antonio Spurs. When James and Bosh joined the Heat this year, the team became a juggernaut of talent.

Both the movie Secretariat and the Broadway play Lombardi opened recently. Sports dramas tend to be all about winning and seldom have any subtlety.

We fans get stuck with enough losers in real life, so it's more enjoyable -- and presumably more profitable for the producers -- to err, when it comes to athletic art, on the side of triumph. Let sensitive, starving poets carry on about what the pain of defeat can teach us.

But if America is obsessed with No. 1, we do expect our champions to possess certain noble characteristics. First, we want to believe that the team was constructed by shrewd management -- wise draft picks, canny trades, plus inspired reclamation projects. And that it isn't just an abundance of talent, but that, in the preferred cliche, the gears mesh in selfless teamwork.

So, as the NBA season begins, most everybody is rooting against the Miami Heat. After all, they didn't do anything to amass their surfeit of talent, but simply caught LeBron James as he fell into their lap, tugging along with him the superb big man, Chris Bosh -- the two of them to join forces with Dwyane Wade. No, this overnight overkill just isn't the proper way for the great American juggernaut to be assembled.

What I wonder, though, is if most of the antipathy toward the Heat isn't more occasioned by how James orchestrated his smug, contrived leave-taking from the Cleveland Cavaliers. If you'll recall, James cast himself as a fairy-tale princess, entertaining suitors, stringing everybody along and then scheduling a dreadfully vain reality show to announce his choice.

It was so ham-handed that when he finally revealed his intention, he didn't say he was going to Miami, but instead declared that he was headed for South Beach -- the chic part of town. Hey, nobody wants to hear that you're moving up to Park Avenue or Hollywood.

Finally, James compounded his gracelessness by suggesting that criticism was based on racism –– an observation that prompted Charles Barkley to declare: "Just when you think it couldn't get any stupider, it gets more stupid."

But the Heat surely will be very good, and the gears will mesh.

My hunch is that, as the victories pile up, James' summer of tackiness will fade, and more and more Americans will warm to the Heat.

On Broadway, much is made of the fact that Vince Lombardi never really said: "Winning isn't the most important thing. It's the only thing." But then, in the United States, he didn't have to say it. He just made sure that his team proved the point.

In Miami, Hopes Sky-High For NBA Championship Oct. 25, 2010
Fans Show Their LeBron Love — Through Poetry Oct. 25, 2010
Why LeBron James Should Be Thanking The People Who Are Burning His Jersey July 9, 2010