Accessibility links
Study: Conservation Efforts Face Uphill Struggle A study published in the journal Science shows that the effort to preserve species is still strongly headed in the wrong direction. The trend is especially pronounced for vertebrates, including mammals, birds and amphibians. 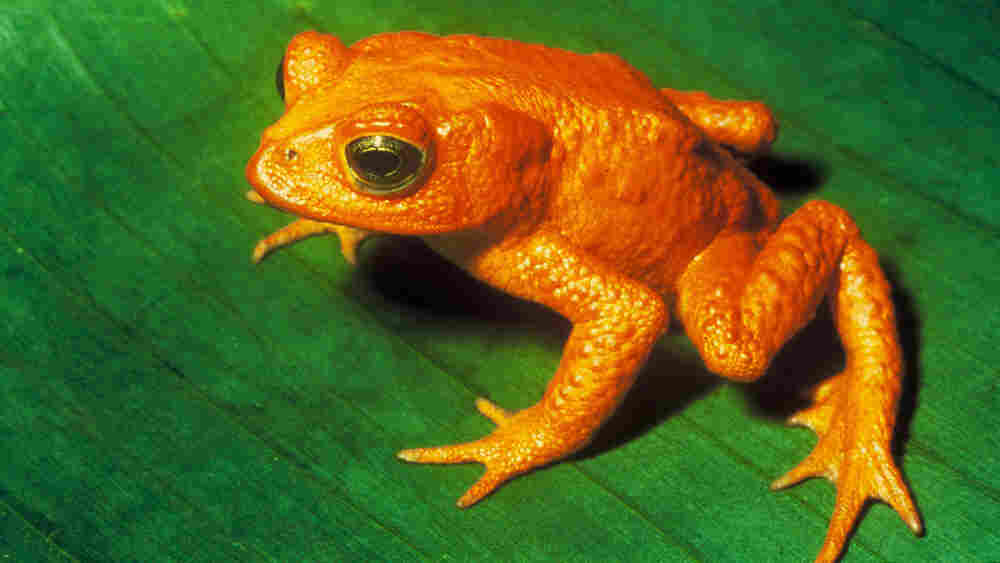 A study finds that more than 800 species of vertebrates are moving closer to extinction, a fate that befell the golden toad. U.S. Fish and Wildlife Service via Wikimedia Commons hide caption

If an ecology professor ever corners you in a bar, pretty soon you'll be hearing how important it is to preserve the diversity of life on Earth. This is to keep the world's ecosystems in balance and also to preserve species directly useful to humans. If that professor happens to be Stuart Pimm from Duke University, the conversation is likely to move quickly to the role of extinction.

"Species extinction is rather like death and taxes," he says. "They are an inevitable part of life, but you just don't want them to happen at too great a rate."

But right now, he says, species are dying off quickly, at about 100 to 1000 times the historical rate.

This week, diplomats are meeting in Japan to discuss whether an international treaty -- the Convention on Biological Diversity -- is accomplishing its goal of protecting all forms of life around the globe. Under the 17-year-old agreement, nations are supposed to be slowing the rate at which species go extinct.

To coincide with that meeting, a group of scientists released their own assessment of efforts to preserve species. They report some success stories, but find that the trend is still strongly in the wrong direction.

The study, published in the journal Science, shows that the trend is especially pronounced for mammals, birds and amphibians -- all vertebrates.

"What we've found overall is, about one in every five species is threatened with extinction," says Ana Rodrigues, from the Center for Functional and Evolutionary Ecology in Montpellier, France, an author of that new global analysis.

She says the worst-off are the amphibians, thanks to a fungus that's deadly to frogs, and has been sweeping the globe: "When it invades a particular ecosystem, it could be just a few years before the entire population crashes."

Some species, like the golden toad in Costa Rica, have simply vanished. In all, the study finds that more than 800 species of vertebrates are moving closer to extinction. But the study is not all bad news.

More On Animals In Trouble

The scientists identified more than 60 species that have improved in recent decades, thanks to concerted conservation efforts. Those species include everything from blue whales to a charismatic denizen of the American West, the black-footed ferret. Rodrigues says these ferrets were virtually wiped off the planet as ranchers killed off prairie dogs, which ferrets relied on for food.

"They were extinct in the wild, which is pretty much as bad as it gets, other than extinct," Rodriques says.

But biologists launched a major effort to raise the ferrets in captivity, and then reintroduced the animals into the wild. The ferrets are still far from abundant, but their status has been upgraded from "extinct in the wild," to "critically endangered" and now to simply "endangered."

"Endangered is bad, but it's definitely not as bad as extinct in the wild," Rodriques says.

Many other species have been preserved by getting rid of invading predators, like cats and rats, on isolated islands.

But Pimm, of Duke University, says the measures that made possible those successes do not address present-day threats.

"The great majority of threatened species are not on islands. They're in places where we are destroying the species' homes," he says. "And stopping that requires different techniques."

Pimm says we're losing the battle to preserve habitat, particularly in places like southeast Asia, where palm oil plantations are rapidly replacing native forest. So conservation biologists who are meeting in Japan can show that preserving endangered species is possible. But they also say it will take much more work to reverse the rapid downward trend.