Accessibility links
Foreign Policy: Why Democracies Don't Get Cholera An outbreak of cholera sweeping through Haiti has killed hundreds and sickened thousands more. Commentator Joe Amon of Foreign Policy argues that the disease is avoidable, but it takes a stable government with a commitment to preventing foreseeable health risks. 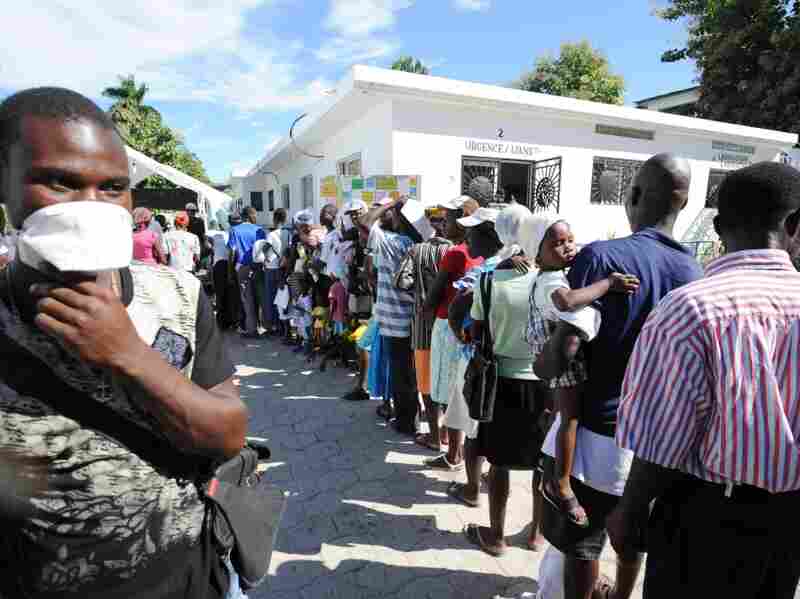 Joe Amon is director of the health and human rights division at Human Rights Watch.

Amartya Sen famously said that famines do not occur in well-run, democratic countries. The same is almost always true for cholera epidemics.

Not long after Haiti's earthquake in January, public health officials warned that poor sanitation and lack of potable water were creating conditions ripe for an outbreak of infectious disease. They were right. In the last week, a cholera outbreak has swept this impoverished country, with more than 3,100 confirmed cases and 250 deaths reported so far. So why -- if we knew that there was a danger of cholera -- couldn't it have been avoided? In short, because disease and democracy often work in opposite directions: vulnerable populations and inadequate government action create both the conditions for cholera epidemics to emerge and to become unmanageable.

Cholera epidemics stem from the same basic cause: poor people living in crowded and unsanitary conditions, with inefficient public health monitoring and limited health care. Cholera is a bacterial infection caused by the ingestion of fecally contaminated water or food. When an outbreak starts, it gains momentum fast.

But another cause is government denial and cover-up. Governments don't want to admit the failure of health-care or surveillance systems, and they are afraid of the trade and travel sanctions that may result from a large outbreak. But inaction leads to larger epidemics: Treating a few cases of cholera with oral rehydration salts or intravenous fluids is relatively straightforward, managing hundreds or thousands of cases is not. With prompt and proper treatment, less than one percent of those infected die. Without a fast response, death rates of five percent or more are not unheard of.

Unfortunately, there are more than enough examples of this worldwide. In 2008, in Zimbabwe, a cholera outbreak infected more than 100,000 people. In the past few months, nearly 50,000 people have been infected in four central African countries. Nigeria has been hardest hit, with about 40,000 cases and 2,000 deaths. Other outbreaks have occurred in the past few years in Kenya and Iraq. Two weeks ago, in flooded regions of Pakistan, 99 confirmed cholera cases were reported. In fact, cholera is on the increase across the globe. Each year, an estimated 3 million to 5 million people are infected with cholera; 100,000 to 120,000 of them die.

Haiti was vulnerable to this outbreak not only because of the January earthquake, but also because the country's rural population has long been marginalized, which has continued during reconstruction. Though rural villages and towns absorbed hundreds of thousands of individuals displaced after the earthquake, they have been largely excluded from the aid response. In rural communities, the already-stretched food and water infrastructure, has been pushed to the limits, while the humanitarian response has focused more on the earthquake-affected areas near Port-au-Prince.

A second factor that predisposed Haiti to crisis was a weakened central government. Both prior to and particularly after the earthquake, the government was largely unable to deliver services. Instead, a precarious web of NGOs and relief organizations took on the job. This patchwork has supported water projects throughout rural Haiti, at various levels of functioning and disarray, meaning that communities often rely solely upon the charity of private groups. When projects fail, there is no accountability.

Even if the infrastructure were perfect, however, clean water is not enough to prevent epidemics. You still need a government, and attention to housing and human rights. For several months, human rights organizations have been decrying the lack of a government plan for housing the 1.3 million people who still live in camps. To reduce the risk of cholera, the squalid living conditions in camps need to be addressed. This is not a task easily conducted by NGOs in piecemeal. Relief organizations and international donors must work to strengthen the capacity of the Haitian government, and to strengthen and empower local civil society.

The role of human rights in promoting accountability is frequently discounted in the immediate aftermath of a crisis. Similarly, the right to health is often misunderstood: It does not mean that everyone has a right to be healthy. Rather it means that governments, at a minimum, need to act to counter foreseeable health risks. Haiti has limited means to provide a broad guarantee to the right to health. But, with the support of private groups and international donors, the government can prevent the cholera epidemic from continuing to escalate and from affecting not just thousands, but hundreds of thousands, of people.

The bottom line is that cholera is avoidable and cholera deaths are preventable. When the immediate crisis is over, attention will turn back to rebuilding Haiti. By listening to the needs of rural residents, by ensuring that planning is participatory and inclusive, by building the capacity of the government to deliver services and fulfill the rights to health, water, and shelter, post-earthquake-rebuilding efforts can reduce vulnerability to cholera and ensure that the Haitian government can protect and fulfill the rights of its people. If it can do that, Haiti can provide an example for countries around the world.