Accessibility links
Religion Ripples Through Anti-Gay Bullying Debate The Department of Education sent a letter to schools Tuesday warning them that failing to stop bullying could violate laws. The letter comes amid worry that anti-gay taunts -- some of which have led to suicides -- have a religious thread. But some Christian conservatives are rejecting anti-gay religious rhetoric and pushing for tolerance. 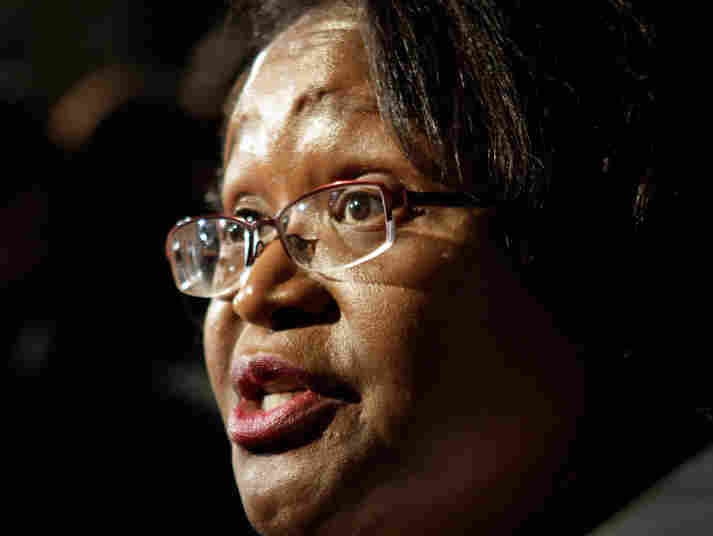 Sirdeaner Walker is a Christian whose 11-year-old son, Carl Walker-Hoover, hanged himself in 2009 after being bullied by classmates. Pushing for new anti-bullying guidelines in schools is doing God's work, she says. Steven Senne/AP hide caption

The Department of Education sent a letter to schools, colleges and universities Tuesday warning them that failing to stop bullying could violate federal anti-discrimination laws. The letter comes amid growing concern that there may be a religious undercurrent to the harassment of teens who are seen as gay.

Consider Justin Anderson, who graduated from Blaine High School outside Minneapolis last year. He says his teenage years were a living hell. From sixth grade on, he heard the same taunts.

"People say things like, 'Fags should just disappear so we don't have to deal with them anymore'; and, 'Fags are disgusting and sinful,' " he told the Anoka-Hennepin School Board. "And still, there was no one intervening. I began to feel so worthless and ashamed and unloved that I began to think about taking my life."

Anderson told his story at a public hearing last month -- a hearing convened because in the past year, the district has seen a spate of student suicides. Four of those suicides have been linked to anti-gay bullying.

Justin Anderson survived. Justin Aaberg did not. Aaberg, 15, loved the cello, both playing and composing numbers like "Incinerate," which he posted on YouTube. Justin was openly gay. He had plenty of friends, but he was repeatedly bullied in his school. In July, his mother, Tammy, found her teenage son hanging from his bed frame.

"They were calling him, 'Faggot, you're gay,' " she recalls. " 'The Bible says that you're going to burn hell.' 'God doesn't love you.' Things like that."

Tammy Aaberg says the school never called her, even after her son was physically assaulted. She was furious at first, but then began to understand why.

"A lot of teachers do care and do want to do something, but they're afraid to lose their job if they step in and they're not neutral," she says.

Aaberg says teachers felt they couldn't get involved -- even when her son was bullied -- because of the school district's "neutrality policy," which prohibits employees from taking sides on matters regarding sexual orientation. The district says the policy is meant to apply to the curriculum. But teachers say it's so broadly written that they're loath to intervene even when they hear anti-gay slurs.

"There is no confusion on this," says Barb Anderson, who works for the Minnesota Family Council, an evangelical group. "Any teacher can stop bullying in its tracks -- and should."

Anderson says she deplores bullying. But she wants to keep the neutrality policy because she says that controversial topics like sexual orientation should be taught in the home or church -- not in school. And she believes that changing the policy to allow such discussions is a ploy to normalize homosexuality for kids.

"It becomes homosexual advocacy when you allow this curriculum to come in under the guise of anti-bullying," she says.

Anderson says she's already seen that happen in nearby Minneapolis, where she says the curricula, including books such as King & King and Heather Has Two Mommies, are teaching kids that homosexuality is acceptable and the Bible is wrong. And her arguments are echoing across the country. Conservative religious groups such as Focus on the Family want to stop what they see as an attempt by gay rights organizations to get a foothold in public schools. Tony Perkins, president of the evangelical Family Research Council, says gay activists are exploiting the concern over bullying -- and twisting the facts.

"There's no correlation between inacceptance of homosexuality and depression and suicide," he says.

Rather, Perkins says, there is another factor that leads kids to kill themselves.

"These young people who identify as gay or lesbian, we know from the social science that they have a higher propensity to depression or suicide because of that internal conflict," he says.

Homosexuality is "abnormal," he says, and kids know it, which leads them to despair. That's why he wants to confront gay activism in public schools. For example, his group supports the Day of Truth, when Christian high-schoolers make their case that homosexuality is a sin.

But Warren Throckmorton, an evangelical who teaches psychology at Grove City College in Pennsylvania, says there is a problem with this argument: Many of the kids who commit suicide aren't gay.

Throckmorton says a growing number of Christian conservatives are questioning the hard-line theological approach. He has created a curriculum called "Golden Rule Pledge," which can be used by churches to prevent bullying.

Albert Mohler at the Southern Baptist Theological Seminary in Louisville, Ky., criticized Christian conservatives for "homophobia" and their "glib assurances that gay persons simply choose to be gay." And earlier this month, Exodus International -- a group that believes people can be freed from homosexuality through Jesus Christ -- pulled its support for the Day of Truth. In an e-mail, Exodus President Alan Chambers says he now believes it is better for Christians' kids to show "biblical tolerance and grace" than to condemn.

Sirdeaner Walker, a Christian whose 11-year-old son, Carl, committed suicide last year, epitomizes that shift. Walker has joined the board of the Gay, Lesbian and Straight Education Network, which, she says, was the first group to reach out to her after her son's suicide. Walker says her family tragedy has prompted her to push for new guidelines for schools to stop and report bullying, to talk about the problem of teen suicide on shows like Oprah, and to lobby President Obama on the issue. Walker says she's doing God's work.

"This has not decreased my faith; it's increased my faith," she says. "I know that whatever the enemy means for evil, God will turn it around for good."

And she hopes that because of this work, another mother, Christian or otherwise, will be spared from having to bury her child.

And yet, despite the shifting views and alliances, there is an ongoing dilemma: How do parents and schools protect vulnerable kids without turning schools into a battleground for the culture wars?