Accessibility links
Health Experts Keep Close Eye On Cholera In Haiti The crisis in the northwestern part of Haiti seems to have stabilized, but many more people may be carrying the cholera bacteria without showing symptoms. Doctors and aid groups are rushing to quell the outbreak. 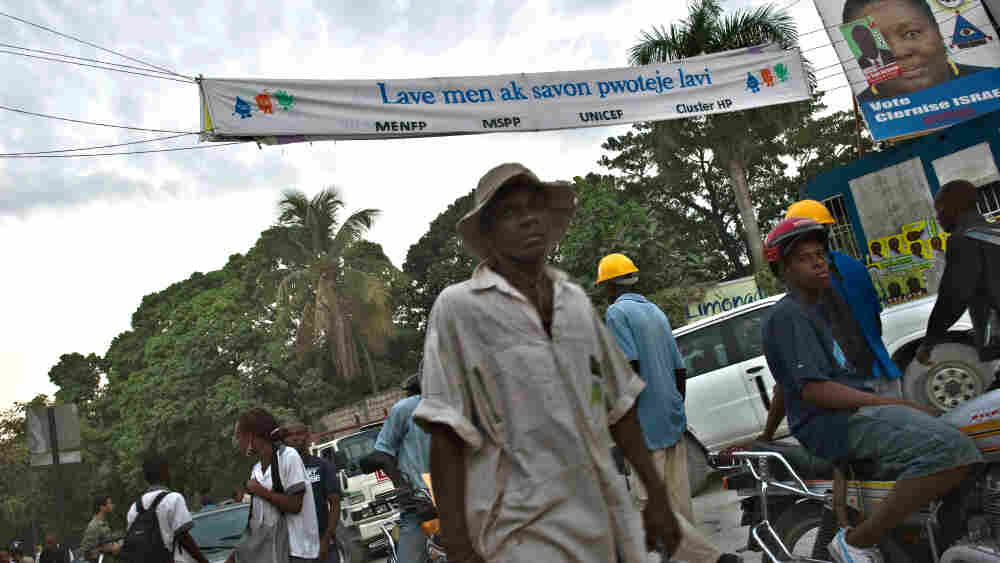 A banner in a street in Port-au-Prince urges people to wash with soap. Though the cholera epidemic has stabilized for now, health officials are working to contain and quell the outbreak and warn that the epidemic is not yet over. Nicholas Kamm/AFP/Getty Images hide caption

The cholera epidemic in the northwestern part of Haiti has stabilized for the moment, but health workers there say that with extreme caution. The case count is based on people who report to hospitals, and there are many more people who may well carry the cholera bacteria silently, without symptoms. That's leaving people in Haiti's capital city, Port-au-Prince, bracing for a possible spread of the disease.

The cholera outbreak began in the Artibonite Valley near the coastal city of Saint-Marc. As of Oct. 27, the U.N. is reporting 273 deaths and 3,612 total cases of the disease, and experts are concerned that the disease could be devastating to people in Port-au-Prince.

Cholera shouldn't be a serious killer -- it can be easily treated if it's caught in time. But it is also stealthy: people can be infected and not know it for up to two weeks. During that time, they can spread it to others through fecal matter that gets into water used for cooking, drinking or washing.

This week, epidemiologists working with the International Organization for Migration have begun to track people from the Artibonite region where the epidemic first struck. An organization spokesman explained that they've used cell phone records to track people leaving the area, many of whom could be infected.

There are lots of them. And though the epidemiologists don't know their identities, they are sending those people text messages to call a free number. If they do, they'll learn about how to avoid spreading the disease and what to do if they get infected. That's crucial if authorities are to keep this epidemic bottled up.

So far the death toll has steadied at 273, with a total of 3,612 cases, according to the United Nations. Only five confirmed cases have turned up in Port-au-Prince.

But the city of Port-au-Prince is the powder keg in this epidemic. There are two groups that are especially vulnerable: one group lives in camps created after the January earthquake who were left homeless -- there are 1.3 million of them -- and the other group includes those who live in the permanent slums. Aid experts say the camps actually are less threatened with cholera than the slums since most camps have clean water and latrines. The slums do not.

Efforts To Stave Off Cholera

Aid groups are in Haiti in force to hold off the epidemic. Sabrina Pourmand-Nolan, local director for World Vision, a humanitarian organization that has been working in Haiti for three decades, says the January earthquake brought help that might not otherwise have been in the country.

More On The Outbreak

World Vision is working in dozens of camps to provide simple things like soap and buckets. Other groups are taking dance and musical groups into slums and camps with shows that educate people about keeping water and sewage apart.

Doctors Without Borders and U.N.-related organizations are also building cholera clinics to help prevent new cases from spreading the disease to vulnerable patients in regular hospitals. Teams are also using GPS to scour and plot the relatively unmapped city of Port-au-Prince to find out where schools and clinics are if cholera starts to flourish there.

Ultimately, cholera could be in Haiti for a long time. It was absent from the country since the 1960s, even as it struck Central and South America. And now that it has arrived, it will take a huge effort to keep a lid on it, says World Vision's Pourmand-Nolan.

To prevent it from becoming a constant or permanent plague, she cites a prescription for Haiti that has persisted since well before cholera struck: "It's not just about getting proper sewage -- it's about getting proper educational facilities, proper health facilities. That's how we are going to protect the people over the long term."