Accessibility links
Whitman, Brown In The Hot Seat Over Negative Ads California Gov. Arnold Schwarzenegger and the candidates vying to replace him shared the stage at an annual women's conference Tuesday. Democrat Jerry Brown and Republican Meg Whitman were asked to pull their negative campaign commercials. 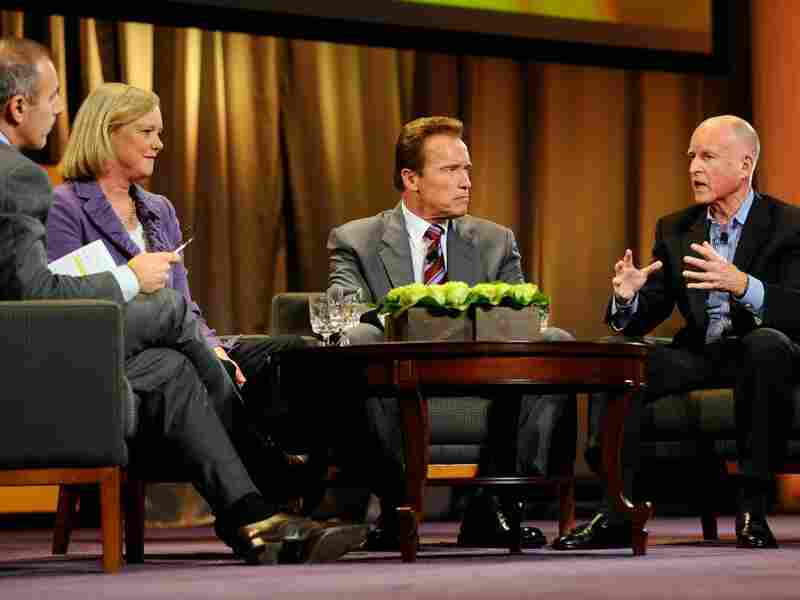 California's candidates for governor had their final face-to-face meeting in an unlikely setting in Long Beach Tuesday. Republican Meg Whitman and Democrat Jerry Brown took the stage at The Women's Conference 2010.

It was a star-studded three-day festival of female empowerment hosted by Maria Shriver, the state's first lady. The candidates shared the stage with the guy they've both been beating up on lately, Gov. Arnold Schwarzenegger.

And the Brown campaign has been trying to hang that on Meg Whitman -- a first time candidate and former CEO of eBay -- saying she's cut from the Schwarzenegger cloth.

In her defense, Whitman says her business experience far exceeds Schwarzenegger's, so there's really no comparing them.

Her stint at eBay made her a billionaire and she's spent at least $140 million of that fortune on her campaign. It's enabled her to savage Jerry Brown's record as governor 30 years ago, and his record more recently as mayor of Oakland.

He's returned the favor, questioning her honesty and fitness for office. It all led moderator Matt Lauer of NBC to pose this question: "In one week left, would either of you, or both of you, be willing to make a pledge that you would end the negativity?"

The audience cheered. The candidates hedged.

"First of all you have to remember that sometimes negativity is in the eye of the beholder," Brown answered. "There's a spectrum."

"I will take down any ads that could be remotely construed as a personal attack. But I don't think we can take down the ads that talk about where Gov. Brown stands on the issues. I think it's not the right thing to do," Whitman said.

The negativity of the campaign was the only thing Lauer asked about for the rest of the session.

Meanwhile, Schwarzenegger seemed happy to just chill and watch his would-be successors on the hot seat. He told Lauer not to worry about the session running a little long.

Brown, the most experienced politician on the stage, made Whitman a proposal that this crowd was ready to cheer.

"I got one nice ad, where I look into the camera and I just say what I'm for. You have a very nice ad where you look into the camera, pretty good ad by the way. We can put both of them on and let all the other ones go off. I'll agree to that right now," Brown offered.

That was an offer Meg Whitman was able to refuse. Trailing Brown in the polls, she needs tools that could reverse the trend.

Lauer encouraged Whitman and Brown to agree to air nothing but positive ads and shake hands on it then and there.

But in the final days of the campaign, the idea has given both of them something new to fight about.