Accessibility links
National Review: Turning Arkansas Red In some districts, President Obama is helping to make up voters' minds about the midterm elections, but not in the way that he had hoped. Andrew Stiles of the National Review argues that in Arkansas, the president is turning out to be a liability for Democrats. 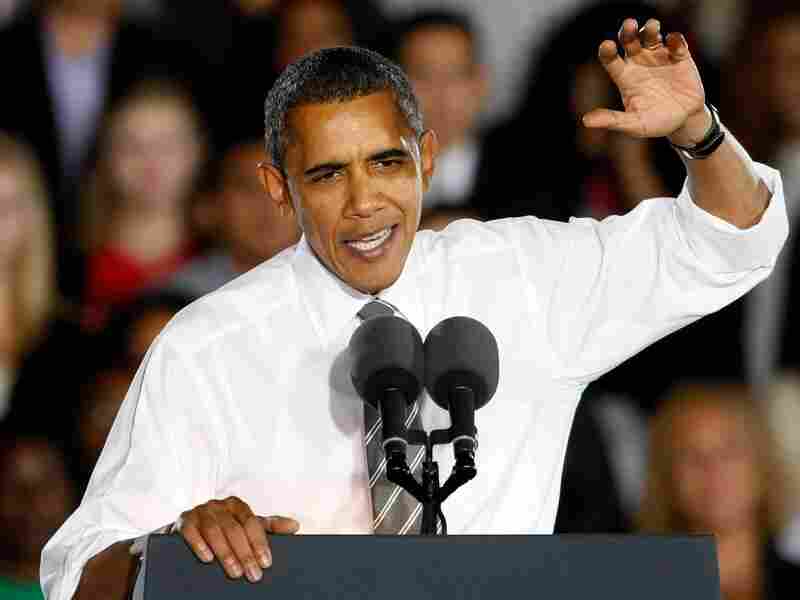 President Obama campaigning in Las Vegas, Nevada. While the president has stumped for Democrats around the country, he has not gone to Arkansas where he could be a detriment to candidates in his party. Ethan Miller/Getty Images hide caption

Rep. Marion Berry (D-AR) said he urged President Obama not to force conservative Democrats like him to march "off into that swamp" by supporting unpopular bills such as health-care reform and cap-and-trade legislation. According to Berry, when Obama was warned that the 2010 election could bring a 1994-style GOP wave, the president replied: "Well, the big difference here and in '94 was you've got me."

Berry wasn't buying it, and he promptly announced his retirement following Scott Brown's upset Senate victory in Massachusetts. His seat in Arkansas's 1st congressional district has been controlled by Democrats since Reconstruction, but that streak could well end in 2010. And if it does end, it won't be despite President Obama, it will be because of him.

Berry has tapped Chad Causey, his former chief of staff, to be his successor. Causey faces Republican Rick Crawford, who as a professional rodeo announcer and former army bomb technician might have the most colorful resume of any midterm candidate. Crawford, who received an early endorsement from former Arkansas governor Mike Huckabee, is trying to become the first Republican since Asa Hodges in 1872 to win the seat.

His odds look promising. A recent poll by The Hill has Crawford leading by 12 points -- 46 percent to 34 percent -- among likely voters, with 17 percent undecided. Strikingly, independents prefer Crawford by a margin of 51 percent to 24 percent. Most election handicappers have the race marked as a toss-up, though Larry Sabato's Crystal Ball newsletter has it leaning Republican.

Isaac Wood, the Crystal Ball House-race editor, says open seats are traditionally the first to go in wave years, as even popular incumbents have a hard time winning support for their chosen successors. The political environment this year is anti-incumbent in general but anti-Democratic in particular, which has frustrated the attempts of Causey and other non-incumbent Democrats to run as outsiders.

Andrew Dowdle, a political-science professor at the University of Arkansas, says there seems to be one overriding factor driving support for the Republican candidate: Arkansas voters do not connect with President Obama.

Not that they were very fond of him to begin with -- Obama won just 39 percent of the vote statewide. He received only 38 percent in the 1st district, which had given 45 percent to John Kerry and 50 percent to Al Gore, the latter of whom actually won the district (barely). As Dowdle notes, it would be easy to argue that racism is to blame for Obama's poor showing; plenty on the left have done just that. But the truth is more complex, and far less comforting for Democrats.

The political culture that gave birth to Bill Clinton's successful brand of Democratic populism has always thrived on the personal connections between politicians and voters, which is why Arkansas Democrats have been so successful in an otherwise conservative state. A lot has changed in the past couple of years. "It's an interesting turn," says Dowdle. "It's very much a populist state, but Republicans are finally able to paint Democrats as elitist."

Even if Obama were white, he explains, "there are so many factors that paint him as an outsider," and voters feel an enormous disconnect. This sentiment is compounded by the president's highly unpopular policies -- the same ones Congressman Berry warned about. "In Arkansas," says Dowdle, "it really is a question of affiliation that drives people's voting decision: 'Do you feel comfortable with these candidates?'"

Obama is certainly no Slick Willy, and Arkansas voters clearly don't feel comfortable with the direction the country has taken under his leadership. While it might also be tempting to blame voter discontent on a struggling economy, the state has actually avoided the worst of the recession, and has an unemployment rate of just 7.7 percent, significantly below the national average of 9.6 percent.

In Berry's district, 62 percent of voters disapprove of Obama's job performance, and 70 percent say the president will be a factor in their 2010 decision. That bodes well for Crawford, who is running against nearly every aspect of the Obama agenda, with an emphasis on repealing the health-care legislation. "I think the president's policies are the biggest single underpinning of the entire race," says Crawford spokesman Ted Prill.

Causey, on the other hand, hasn't exactly embraced Obama, though he has sought the support of President Clinton, who stumped for him in Jonesboro earlier this month. He claims he would have voted against Obamacare but is against repealing it. He also wants to ban earmarks and cut congressional pay by 10 percent. Both candidates support a balanced-budget amendment and want to extend all the Bush tax cuts.

Republicans are hammering Causey as too closely aligned with President Obama and House Speaker Nancy Pelosi, and they're using his work for Berry to cast him as a Washington insider. "Remember, you can't spell Chad Causey without D.C.," declares a recent ad by the National Republican Congressional Committee.

"Causey is running as far away from Obama as he can," says Prill. "He doesn't want to tick off the [Democratic Congressional Campaign Committee], but he can't say anything too nice [about the party leadership] because voters are uncomfortable with what they have to offer."

Isaac Wood says that even Causey's best efforts to distance himself from national Democrats could come up short, given the political climate. "'Trust me, I'm a Southern Democrat' is a tough argument to make this year," Wood says.

Either way, both parties are investing heavily in the race. The NRCC has spent around $337,000 in the district so far, while the DCCC has spent about $304,000. Considering what is at stake, those numbers are not surprising. "If Republicans can win this seat, it could stay with them for quite some time," says Wood.

Dowdle agrees, saying this year's midterms, as well as the 2012 general election, could solidify Arkansas's long-term realignment toward the GOP. "It could be a generation before some of these seats end up changing if they ever change," he says. "This [Republican realignment] is long overdue compared to most southern states, and this [year's election] could be the push that finally does it."

Democrats are expected to endure major losses across the country next week, with some experts predicting an even bigger Republican landslide than the one that occurred in 1994. In the race for Berry's seat (and countless others), President Obama is indeed making a "big difference" -- just not in the way he had hoped.