Accessibility links
For Army, Preventing Suicides Starts On Day 1 The Army says 79 percent of suicides occur within the first three years of service, whether soldiers have been deployed or not. The trend points to major transitions within the soldier's life as one of the main causes.

The Army has found that 79 percent of suicides in its ranks occurred in the first three years of life as a soldier, whether or not the soldier had been deployed. And suicides tend to happen during times of serious transition.

Alarmed at the growing rate of soldiers taking their own lives, the Army has begun investigating the effectiveness off its mental health and suicide prevention programs. It also has instituted many programs to counsel and train soldiers. 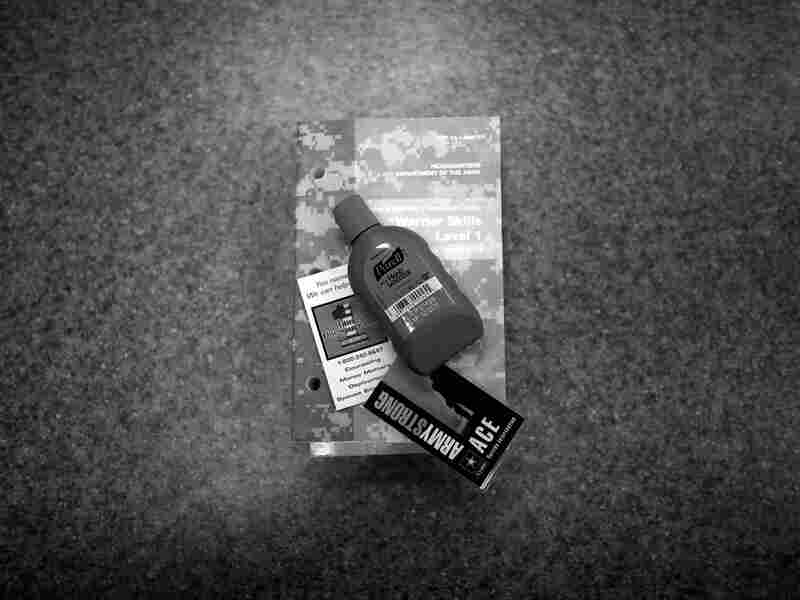 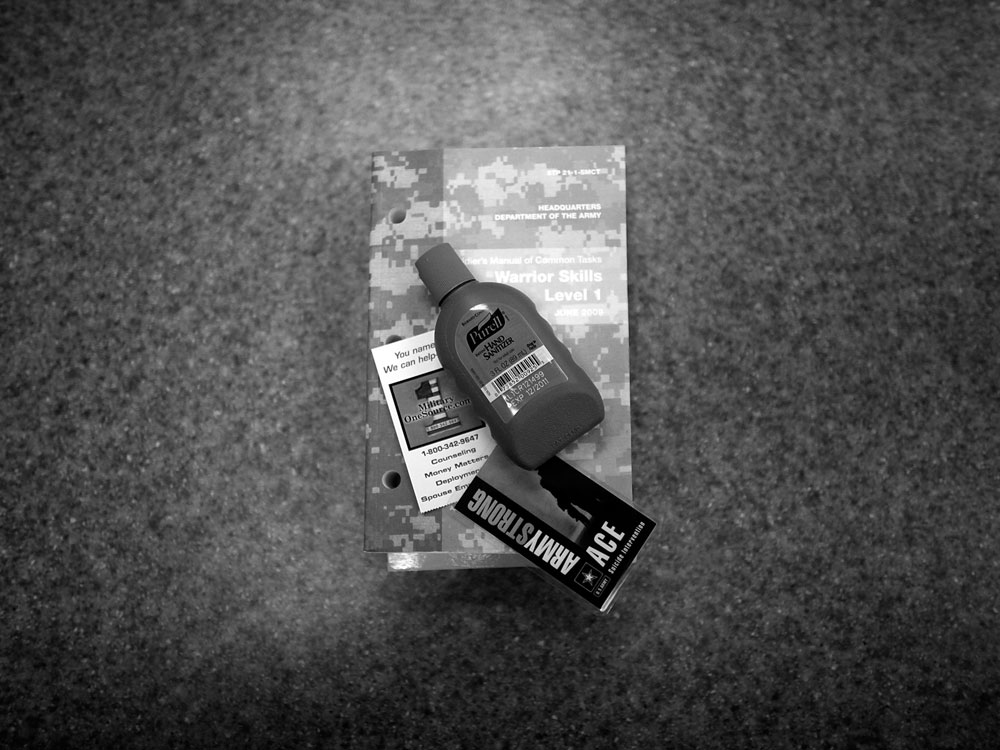 A bottle of hand sanitizer, suicide prevention help card and Army resource card are handed out to new recruits at the U.S. Army Training Center reception facility at Fort Jackson in Columbia, S.C.

Suicide Rivals The Battlefield In Toll On U.S. Military

In its latest monthly report on suicides, the Army said 18 soldier deaths were under investigation -- up from 13 the month before.

Transition for a soldier can mean a number of things: deploying to a combat zone, coming home, leaving a unit or leaving the Army. But one of the biggest transitions in any soldier's life is that first moment when the bus rolls into the processing center, like the U.S. Army Training Center at Fort Jackson, S.C.

After 10 p.m. on the first day for a recent crop at Fort Jackson, drill sergeant Nicholas Pieroni walks the aisle of a bus full of new recruits, shouting instructions. He tells the men and women how they are to file out of the bus and line up.

The soldiers are ordered to tuck in their shirts, and jelly bellies and muffin tops become evident. The Army's basic training has changed for the first time in 30 years to accommodate a generation that is less fit, and spends more time indoors and in front of computers.

The recruits shuffle into the processing center, which resembles a classroom full of desks. The soldiers line up at each desk, and there's an orientation package for each of them, complete with an Army manual and hand sanitizer.

It's not gonna be like you're going camping. You're gonna get worked, so if you can't handle that kind of thing, you should never come to a military branch.

Staff Sgt. Timothy Bruce goes through everything with the new soldiers, including an orange-and-black card labeled "ACE" that on the back side resembles a playing card.

"That's your suicide prevention card. On the back of that card, it has some helpful hints and tips on how to prevent suicide. Put that card off to the right-hand side," Bruce says.

For the new recruits, it's a jarring moment to be instructed in suicide prevention right after getting off the bus. Some take a minute before putting the card away.

The general mood, though, is excitement. When asked why they joined the Army, some of the recruits say they needed the discipline or to pay for college, while others joined out of patriotism or family tradition.

Several weeks into their 10-week training, the new recruits fill out a questionnaire of 100 questions, called the Global Assessment Tool, or GAT. There are no right or wrong answers, a drill sergeant explains, making sure the soldiers know that the GAT is not a test.

Instead, the GAT is one of the main tools the Army uses to track behavioral health. The questions relate to how soldiers handle stress. 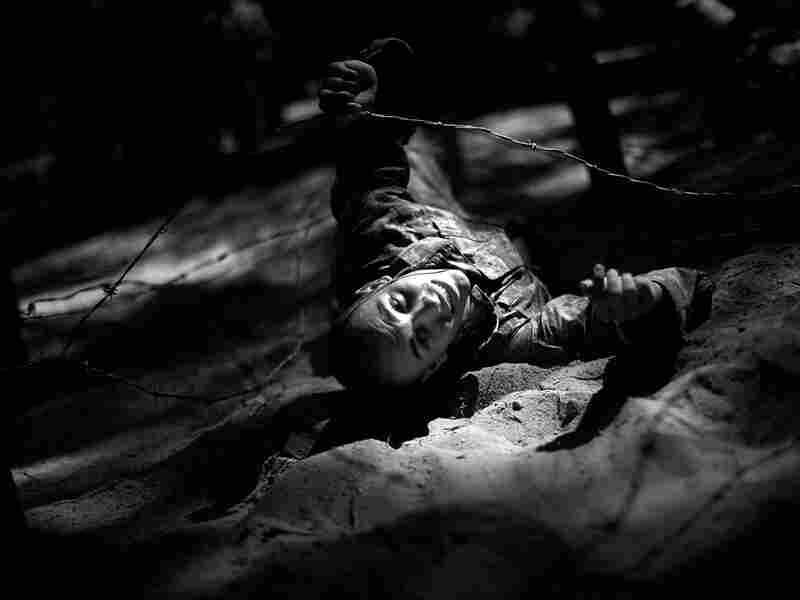 Pvt. E-2 David Mangold crawls under barbed wire during a series of obstacles in a training course. For the first time in 30 years, the U.S. Army has changed the way it trains new recruits. Core exercises and sprints have replaced bayonets and long runs. David Gilkey/NPR hide caption 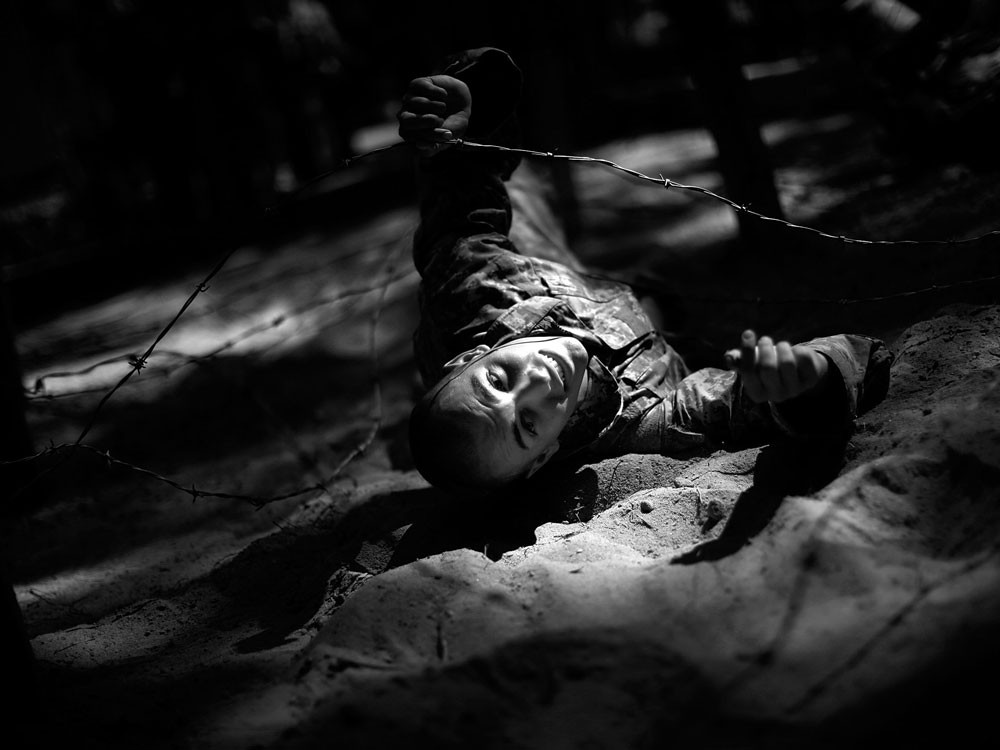 Pvt. E-2 David Mangold crawls under barbed wire during a series of obstacles in a training course. For the first time in 30 years, the U.S. Army has changed the way it trains new recruits. Core exercises and sprints have replaced bayonets and long runs.

Even at this early stage, the training can be too much for some. A new recruit killed himself in his barracks at Fort Jackson in February this year.

Five weeks into the training, Army recruit James Watson from Clinton Township, Mich., watches a training exercise. He says he has little sympathy for those who don't make it.

"I don't believe in suicide," Watson says. "I think that's the easy way out. You know what you're getting into if you sign this contract. It's not gonna be like you're going camping. You're gonna get worked, so if you can't handle that kind of thing, you should never come to a military branch."

Much of the 10 weeks at Fort Jackson is taken up in training for war. In the final stage of exercises, the recruits are in full combat gear, vests and ammo clips. Their unit enters a mock Iraqi town to meet with the mayor. Shipping containers stand in for office buildings. It's a hostile area, and they come under simulated fire. 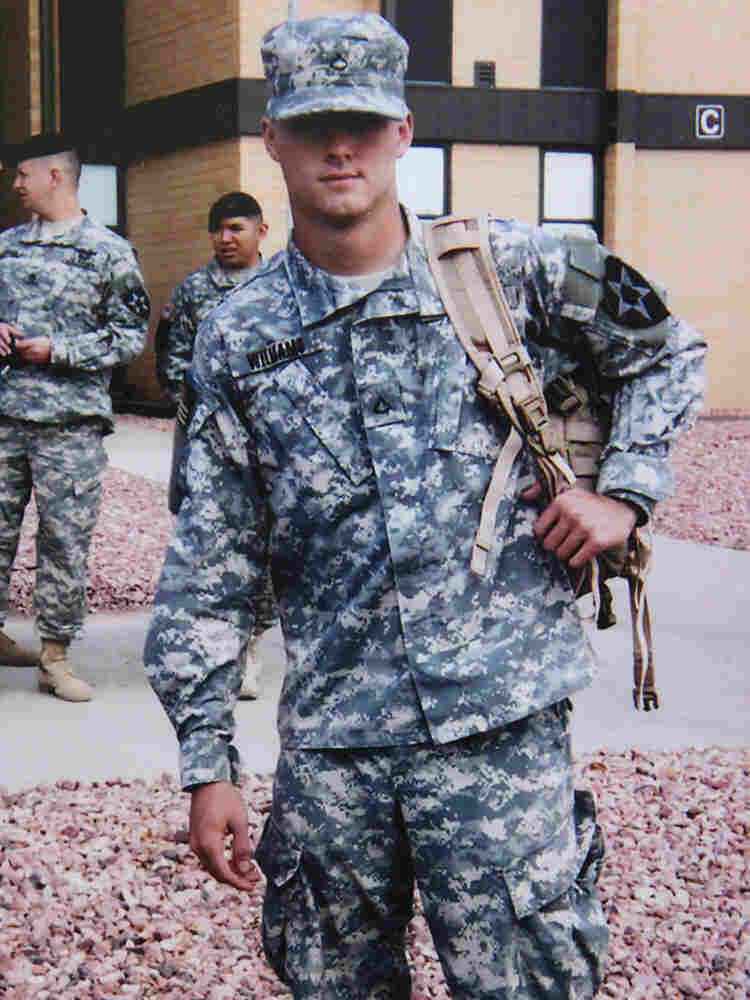 Brian Williams killed himself while on leave from his first tour of duty in Iraq on Jan. 8, 2007. Courtesy of Connie Scott hide caption

When the exercise is over, the recruits stand in the shade and drink water.

Ryan Cooper, 19, from Buffalo, N.Y., says he doesn't recognize the person he was when he arrived nearly 10 weeks ago.

"I didn't even eat for like the first two weeks I was here because I was homesick," Cooper says.

Going to war is what the soldiers are repeatedly told will happen. It's probably the biggest transition they will ever deal with.

Most make it, but some, like Pvt. 1st Class Brian Williams, don't.

Williams' case is a classic example of what the Army means when it talks about suicides in transition. Williams joined the Army in 2005 at the age of 19. At the time, his mother, Connie Scott, was on her honeymoon with her second husband when Williams left her a voice mail message.

"By the time we got back to town he had enlisted, so about 10 days after [my husband] Patrick and I were married, he left for basic training," Scott says.

Williams went straight from basic to advanced individual training, then on to Fort Carson, Colo. Not long after that, he was deployed to Iraq. He was stationed in Ramadi, in the western province of Anbar, in 2006, at the height of the Sunni insurgency. His job was to maintain electronic gear, but his mother says he routinely went out on patrol with his unit.

"He was led to believe that he would be keeping the equipment in working order. But he was also part of doing the night patrols where they would go into Ramadi and kick in doors, looking for insurgents," Scott says.

After a couple of months in Iraq, Williams was ordered to take home leave.

According to Scott, that's when the problems started. His unit had just lost men, and as he waited for the flight home, his fiancee called to say she was in love with someone else. It took five days for Williams to make it home to Minnesota. 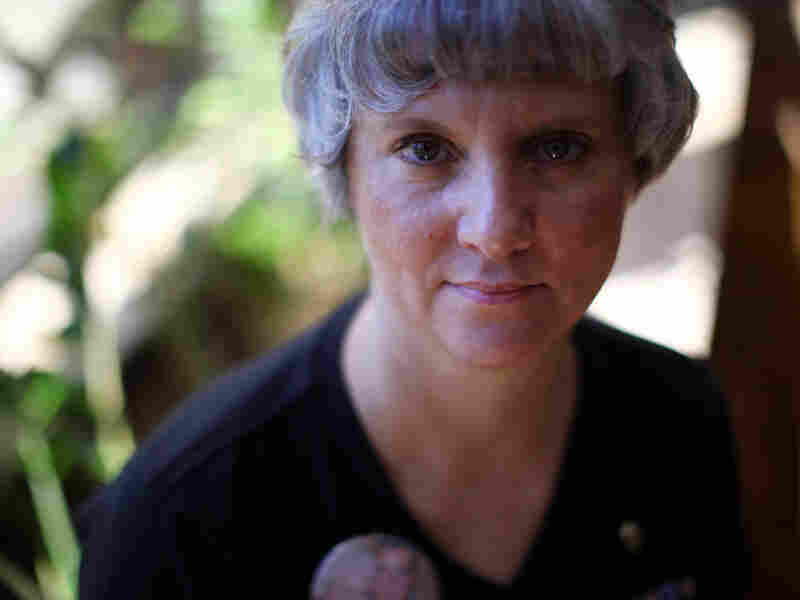 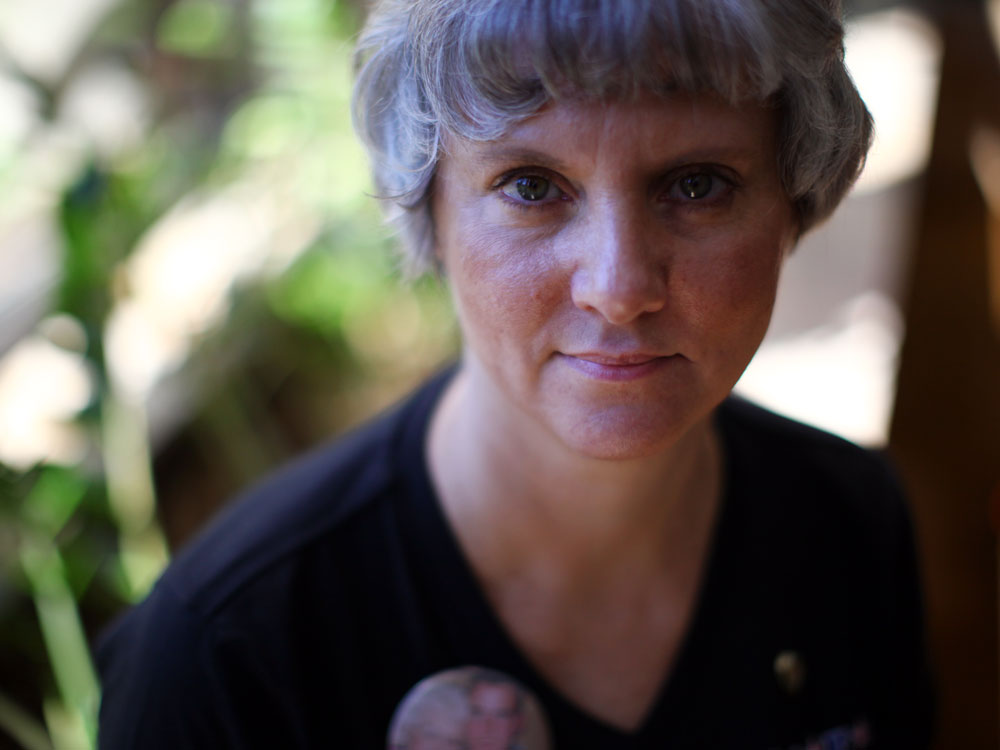 Connie Scott, mother of Brian Williams, poses for a portrait at the TAPS (Tragedy Assistance Program for Survivors) conference in Alexandria, Va.

Without his fiancee, he arrived that Christmas at his mother's new house with her new husband.

Scott says Williams shared some of what he saw in Iraq with his brother and sister, but he did not tell her anything. Toward the end of his two-week leave, he met up with his former fiancee so they could return each other's belongings.

The day before he was to fly back to Iraq, he seemed calm and upbeat.

"He was looking forward to getting back to Iraq," Scott recalls. "He missed his buddies. He wanted to learn to play the guitar when he got over there ... He had this sense of lightness and peacefulness, and I thought, 'Oh, thank God, he's OK. I can go to bed tonight and sleep.' And I woke up the next morning to him having taken his life."

Williams had been in the Army for less than three years. His mother believes that if he had stayed in Iraq, her son would have survived, as his battle buddies would have been able to help him deal with the deaths in his unit and the loss of his fiancee.

It is the points of transition in life -- as in Williams' case -- that the Army is trying to understand in order to address the causes of suicide. There are more than a million soldiers coming in and out of the Army, in and out of war -- all in transition.