Accessibility links
Tony Hawk: From Skateboard Misfit To CEO In the world of skateboarding, only one man can claim Bill Gates status: Tony Hawk. His brand is on everything from skateboards to Jeeps to cheeseburgers -- and he's releasing his 12th video game this week. 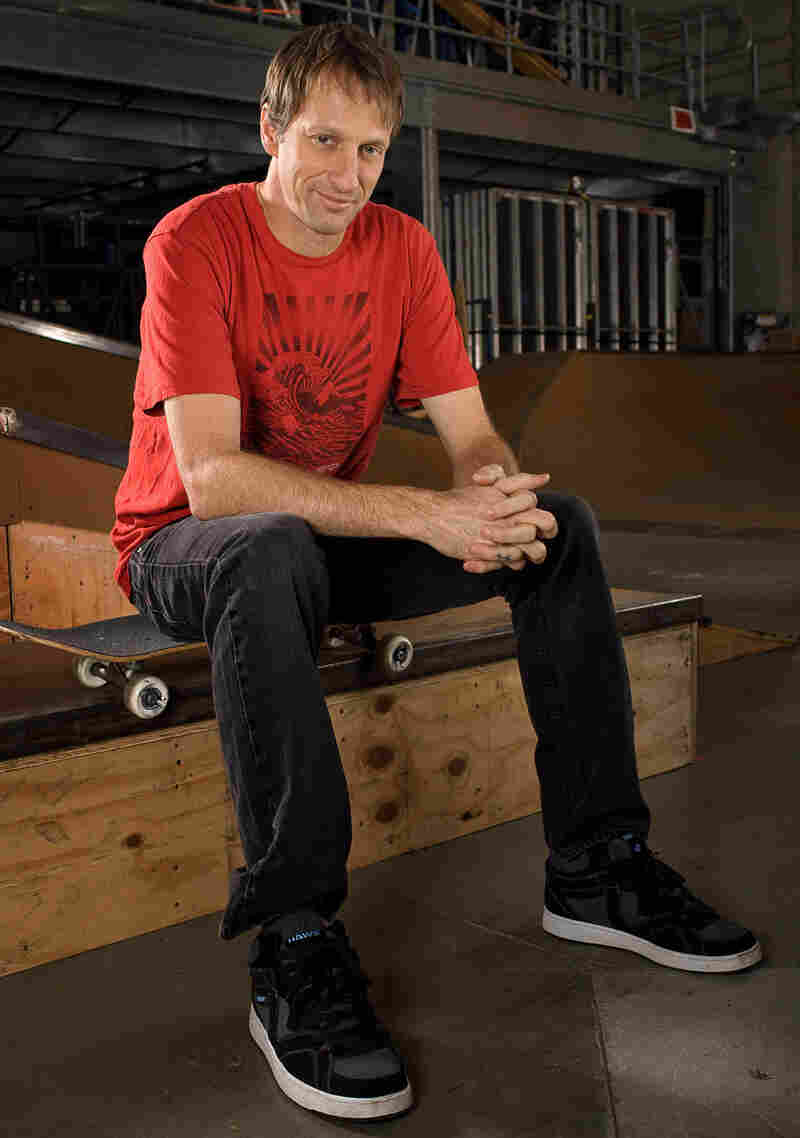 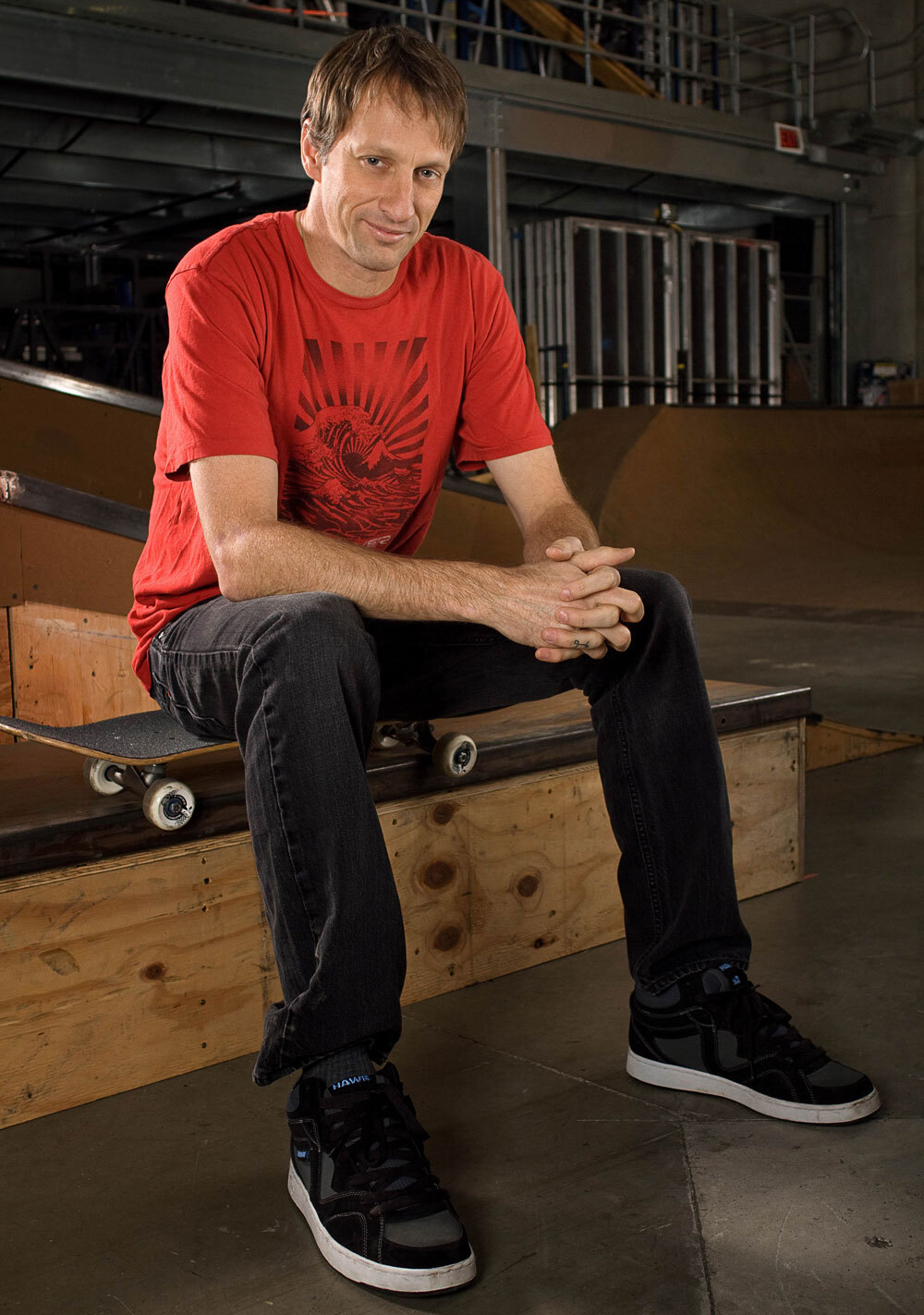 In the world of skateboarding, only one man can claim Bill Gates status: Tony Hawk. With a $1 billion video game franchise, Hawk is the most successful skateboarder in the world. His brand is affiliated with everything from skateboards to Jeeps to cell phones to cheeseburgers to games. He's releasing his 12th video game, "Shred," this week.

But the story of this unlikely sports mogul actually begins just before he retired from competitive skateboarding. In 1999, the lanky 31-year-old from Carlsbad, Calif., stunned the skateboarding world when he catapulted himself off the side of a massive U-shaped skateboard ramp, turned two-and-a-half rotations and landed the first-ever "900" at ESPN’s X Games.

And resonate it did. Just a few months later, Hawk released his first video game, "Tony Hawk Pro Skater." With the publicity surrounding the famous "900" trick, and the popularity of the Sony PlayStation, the timing of the release couldn’t have been more perfect.

"We had no idea how big the game would get so quickly," says Dave Stohl, the video game's producer. "You could almost watch every week -- bigger, bigger, bigger and then explosion. It just got huge."

"Tony Hawk Pro Skater" launched a franchise that would grow to generate over a $1 billion in sales in the United States, according to retail analyst NPD Group. And it wasn't just the game that got popular; the sport itself was also growing. The National Sporting Goods Association reports that the number of people skateboarding jumped 70 percent from 1998 to 2004. Meanwhile, participation in traditional "stick-and-ball" sports was flat or even declined.

"The soccer mom has become the skate mom," says Mark Lewman, an action sports marketing expert. "Tony Hawk is an ambassador of skateboarding. He's inherited that role through the things he's done in his career as a skater, as a video game pioneer, as an event promoter and an entrepreneur."

But, of course, he didn’t start out that way. 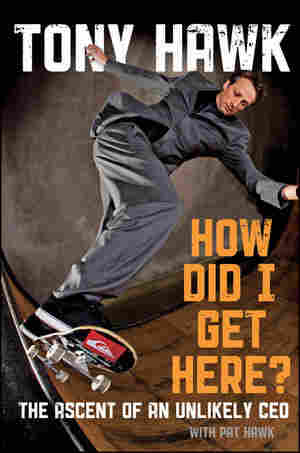 How Did I Get Here: The Ascent of an Unlikely CEO
By Tony Hawk
Hardcover, 224 pages
Wiley
List Price: $24.95

"When I started skating, it was such a small community," Hawk says. "You didn't aspire to be rich or famous or make a career out of it because that wasn't something anyone had done yet."

It was Hawk's father, World War II Navy fighter pilot Frank Hawk, who helped his son -- and the sport -- get organized. Frank Hawk founded both the California Amateur Skateboard League and the National Skateboarding Association, organizations that held contests and gave structure to the sport.

"He gave a platform for a bunch of delinquents that were misfits or outcasts to the normal world of athletics," Olson says. "Frank Hawk was the dude. Like, he was running the contests."

Today, both Hawk and Olson are able to look back on skateboarding's early days when it was derided as just a toy, and look to their sons to see how far it's come. Olson's 24-year-old son, Alex, has turned pro, while Hawk's 17-year-old son, Riley, is an amateur skater.

That's something Hawk says he wishes his father could have seen.

"You know, if I had one regret it's that my dad didn't get to see how big this all became because he was my biggest supporter, and he died in '95 of lung cancer," Hawk says. "He would have never dreamed it got like this. That it was this big."

Excerpt: 'How Did I Get Here?'

How Did I Get Here: The Ascent of an Unlikely CEO
By Tony Hawk
Hardcover, 224 pages
Wiley
List Price: $24.95

In 2001, I got invited to do a demo at the grand opening of a public skatepark near Chicago. The community that invited me was affluent—they could afford to fly in a celebrity skater from California as part of their opening-day fanfare. I arrived the day before the big event, and they asked if I wanted to ride the park that afternoon, alone. I jumped at the chance, figuring I'd give it a test run before I skated the place in front of a crowd.

The park, unfortunately, was a joke—a nonsensical arrangement of poorly constructed obstacles. There was no sense of flow: A set of stairs abutted a bank, so if you ollied down the stairs, you'd run into the bank, and if you rode down the bank, you'd slam into the stairs. The ledges were six inches high instead of the standard two feet. And there was a bizarre, narrow, winding sidewalk with tiny unrideable berms on either side. It felt like the park had been designed by someone who knew nothing about skateboarding, and had been built by whatever sidewalk contractor happened to make the lowest bid.

I rolled around the place for a while, blowing easy tricks, trying to find a zone where I could actually do some real skating. After a while, I just gave up.

Some of the parks-and-recreation officials approached and asked me how I liked their new facility. I didn't to want to hurt anyone's feelings, but I also didn't want to lie. I said, "Honestly? It's pretty bad."

And they said: "You know what? That's what all the local kids have been saying. But we told them, 'Just wait until Tony Hawk gets here. He'll show you how to ride it.'"

Because of my failed test flight, they decided to bring in a vert ramp to make sure I'd have something to skate for the big demo the next day. After I was finished, they carted away the ramp and gave the kids their crappy skatepark.

Back home, as I started telling this story to friends, it occurred to me that I was in a position to help stop such foolishness from recurring—to fix the ongoing disconnect between the people in positions to build public skateparks and the kids who ride them.

Skateboarding was going through an upswing in popularity at the time, and this one looked like it would stick. The X Games and my video game had introduced skating to a whole new market: spectators. People who'd never stepped foot on a skateboard were now stopping pros like Bob Burnquist and Andy Macdonald on the street, asking for autographs.

More significantly, young kids were buying skateboards like never before; there were more than 12 million skateboarders in the United States in 2001, but only about 2,000 skateparks. And a lot of those parks were bad—as I'd just learned firsthand outside Chicago.

I also knew that many communities were resistant to building any kind of skatepark. The impoverished ones couldn't afford it. Others were worried about liability. And some feared a skatepark would attract too many punks.

But here's the thing: Kids are going to skate whether or not civic leaders create a place for them to do it. So they end up skating in spots that city officials or school administrators or local business owners have deemed off-limits. That means youngsters who'd never before been in serious trouble suddenly find themselves getting ticketed or arrested or suspended—simply because they want to pursue a sport that they're passionate about. And once a kid gets on the wrong side of the law, for whatever reason, his world can speed downhill.

Excerpted with permission of the publisher John Wiley & Sons Inc.(www.wiley.com) from How Did I Get Here? The Ascent of an Unlikely CEO. by Tony Hawk Copyright 2010 by Tony Hawk, Inc.