Accessibility links
With Oil Set To Flow, Ghana Ponders The Future Off the coast of Ghana, crude oil is expected to begin flowing from new finds by the end of the year. But with the hope of profits for the West African nation come worries that oil production will harm the environment. Local fishermen already complain that their catch is down. 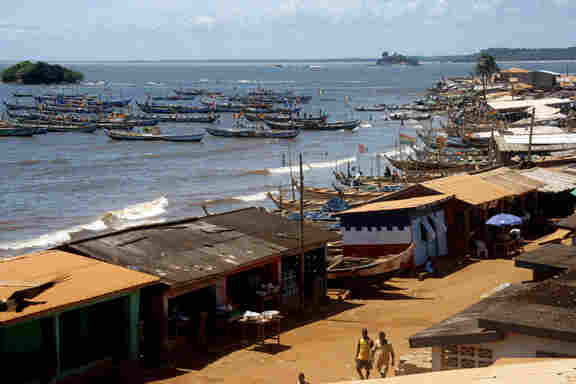 Dugout wooden fishing canoes bobbing on the Atlantic Ocean, beneath the village of Apewosika in central Ghana. Fishermen are concerned that the discovery of offshore oil is reducing their daily catch and threatening their livelihood. Eric Don-Arthur for NPR hide caption

Ghana is poised to join the club of global oil exporters and is expected to begin pumping by the end of the year.

Recent crude oil finds along the coast of Africa's Gulf of Guinea have heightened the profile of a region the U.S. increasingly relies upon for petroleum as it seeks alternative sources to the volatile Middle East.

But will black gold be a blight or a blessing for Ghana?

"With oil as a shot in the arm, we're going to fly, going to really zoom, accelerate," he said. "And if everything works, which I pray will happen positively, you come back in five years, you'll see that Ghana truly is the African tiger for development."

Kufuor pledged that Ghana would spend its oil money wisely and avoid the conflicts, civil wars and corruption that have blighted other African oil producers, like nearby Nigeria. 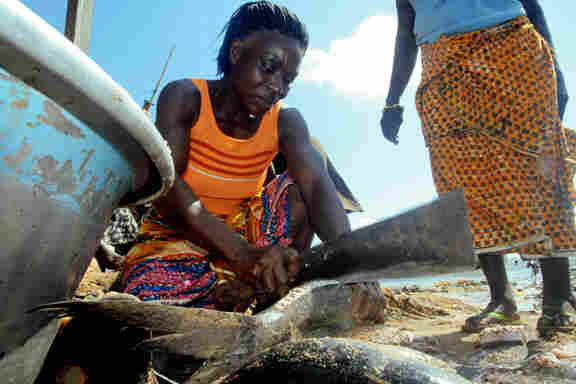 Fishmonger Esi Dede slices a fresh catch on the beach at the village of Apewosika, near Axim in central Ghana. Locals complain that the burgeoning offshore oil industry on the Atlantic coast means dwindling fish hauls. Eric Don-Arthur for NPR hide caption

Ghana has been praised by international rights groups for respecting democracy and human rights.

"Ghana is not going to be another Nigeria," said Bright Simons, a development and energy analyst at IMANI Ghana, a think tank in the capital, Accra.

"There are more plausible similarities in the region. You can look at Ivory Coast, Cameroon," Simons said. "There are several countries in Africa that produce oil, but they don't produce it in sufficient quantities. And therefore you haven't seen the same level of oil-induced governance and social solidarity problems that you've seen in Nigeria and Angola and elsewhere."

"The real problem is that people have unrealistic assumptions because the government has not bothered to explain the dynamics of the industry," he said. "It is important that right from the very start, people get it into their psyche that this is not something that will transform local communities."

It is not visible from the shore, but 100 miles off the coast of the fishing village Apewosika, oil is being drilled beneath the Atlantic.

Already, people in the fishing communities of the district of Axim say that the discovery of oil is affecting their lives.

"I'm a bit sad," he said. "For some time now, we have not been getting fish as in previous year[s]. So, in fact, we are in the hard times as far as the oil exploration is concerned. If I look back, about three to four years back, as compared to now, we've not been getting fish. And so the economic situation here is very terrible."

Aidoo says he attributes this to the discovery of oil. "When the exploration hadn't been started, we [had] been getting fish as we used to do, but this particular year ... the volume of fishes that we used to catch has dwindled," he said.

Over the 17 years he has worked as a fisherman, Aidoo says 2009 and this year are particularly bad. 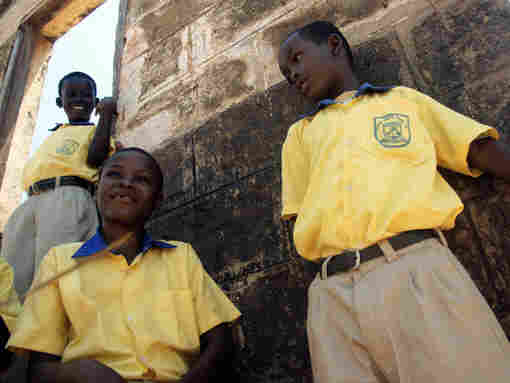 Pupils at Axim Methodist Primary School ponder what the discovery of petroleum will mean for future generations. "Development -- and jobs," hopes one student. Eric Don-Arthur for NPR hide caption

"The discovery of oil is gradually collapsing the artisanal fishing industry," he said. "The entire country is going to benefit from the oil but we, the fishermen -- it is going to go against the business that we're doing. So we the fishermen are not pleased, to be honest."

Nearby, a couple of fishermen sing and mend yards of blue nets.

Fishmonger Elizabeth Asafua wants to know what the government and the oil companies are planning in the way of alternatives to fishing.

"If this trend of diminishing daily catches continues for our fishermen, then they should give us compensation so we can pay our children's school fees," she said. "They should create factories or industries, other than fishing, and scholarships."

Tullow Oil is the British company drilling Ghana's oil in partnership with other companies and the Ghana National Petroleum Corporation (GNPC).

Kenneth McGhee, in charge of corporate social responsibility projects for Tullow Ghana, says the company is listening to local concerns.

"Our main focus, among many, is the fishing communities," he said. "Our job is to keep them safe, keep them away from the rig, but also provide other opportunities for them to fish and do other things to maintain or improve their livelihood."

McGhee says Tullow is trying to build trust with the local communities.

"We don't want people to stop fishing -- there's plenty of fish out there -- although I know catch is down," he said. "But I think there are things we can do together with expertise inside and outside of Ghana to help the fisher folk continue to fish effectively and live in harmony with us."

Simons, the oil industry analyst, points to other concerns. There have been questions about investor confidence and security of operating contracts, he says.

The credit rating agency Standard and Poor's lowered its sovereign ratings for Ghana from B+ to B in August, signaling concerns over public finances and oil revenue management.  The International Monetary Fund has pointed to unsustainable debt levels.

"If you have regional security dynamics that are not well dealt with -- for instance, we know that piracy is increasingly a problem on the east coast of Africa; are we going to see that on the west coast of Africa? Possibly," he said. "If that mixes up with oil, what will we get?"

And there are other challenges.  Ghana's parliament is currently drawing up oil-revenue laws, with talk of proposed "heritage funds" to set aside oil revenue to benefit Ghana's future generations.

"Is the oil going to be a curse or a blessing for Ghana?" he asked the students.

And, as if mirroring her hope, the class later sang "Yen ara asase ni" -- "Our Own Precious Land" -- one of Ghana's favorite patriotic anthems.