Accessibility links
Arrest Made In Alleged D.C. Subway Bombing Plot Faroogue Ahmed of Virginia was charged with trying to help people he believed were al-Qaida operatives in planning to bomb subway stations around the nation's capital, the FBI said. 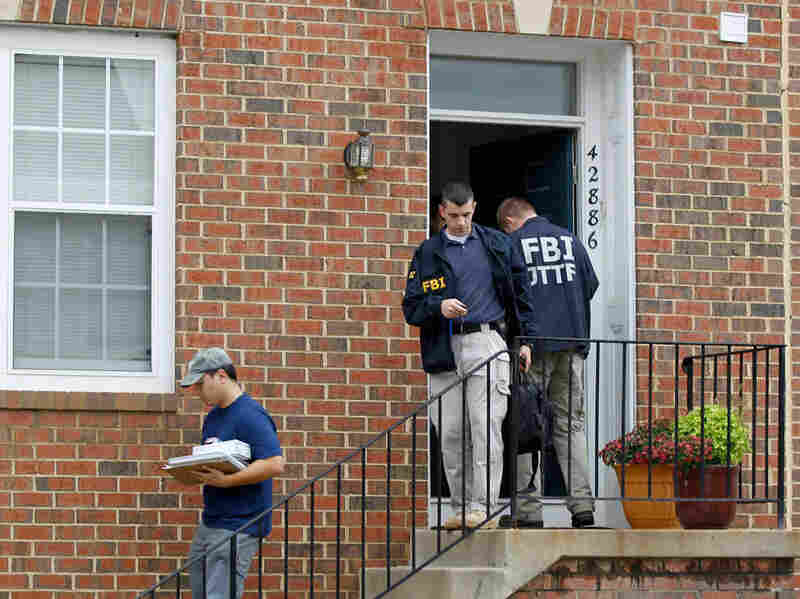 Federal law enforcement authorities arrested a Virginia man they say was plotting to set off multiple bombs in the Washington, D.C., subway system.

The man, Farooque Ahmed, 34, has been indicted on three terrorism charges, including providing material support to a terrorist organization. Unlike other U.S. citizens who recently have been implicated in terrorism plots, Ahmed did not have any overseas training and did not appear to want to travel overseas to get the skills he needed for the attack, law enforcement officials said. He did allegedly talk about sending tens of thousands of dollars overseas to "Muslim brothers" who might need financial help to launch attacks.

NPR has learned Ahmed came to officials' attention when he was seeking to obtain explosive materials early this year. A short time later, he became the target of an undercover operation in which agents posed as members of al-Qaida.

He allegedly started to perform reconnaissance in April for the attacks and spent five months videotaping and diagramming various Metro stations. He then allegedly started passing on information to the undercover agents -- which is why officials have stressed that the public was never in any danger. Officials watched Ahmed closely in the ensuing months, trying to make sure he was working alone.

Law enforcement officials tell NPR that Ahmed had allegedly decided on four Metro stops that he believed would be particularly busy and lethal during his attacks. Officials say the stations were Arlington Cemetery, Court House, Pentagon City and Crystal City. The latter three stations are located under large commercial, government and/or residential developments.

Officials say Ahmed conceived of the plot and planned to carry it out on his own. He allegedly wanted to put explosives in rolling suitcases, instead of backpacks, so he would not attract undo attention. He faces as much as 50 years in prison.

The arrest is the latest in a series involving U.S. citizens. Earlier this month, a Jordanian man, Hosam Smadi, 20, was sentenced to 24 years in prison for plotting to blow up a Dallas skyscraper. In that case, the FBI had provided dummy explosives that Smadi put in a van and drove into the basement of the building. Smadi was discovered in a jihadi chatroom where FBI agents were posing as al-Qaida operatives.

Law enforcement officials say Michael Finton, 29, of Illinois planned to drive a van he thought was laden with explosives into the basement of a federal courthouse in Springfield, Ill. The FBI had supplied the van and dummy explosives in that case as well. Finton's trial is scheduled to start in March.

By far, the best-known American to have planned to set off a car bomb is Faisal Shahzad, a 30-year-old Connecticut man who tried to ignite a vehicle bomb in New York's Times Square in May. In that case, he traveled to Pakistan and received explosives training from the Pakistani Taliban. He collected all the materials he needed for the bomb, but he didn't assemble them correctly, law enforcement officials said. The bomb never exploded, and Shahzad was given a life sentence earlier this month.