Accessibility links
Money Has Poured Into Colorado's Senate Race A campaign finance policy think tank says outside groups have spend nearly $30 million on the tight contest between Democratic Sen. Michael Bennet and Republican Ken Buck, making it one of the most expensive in the nation. 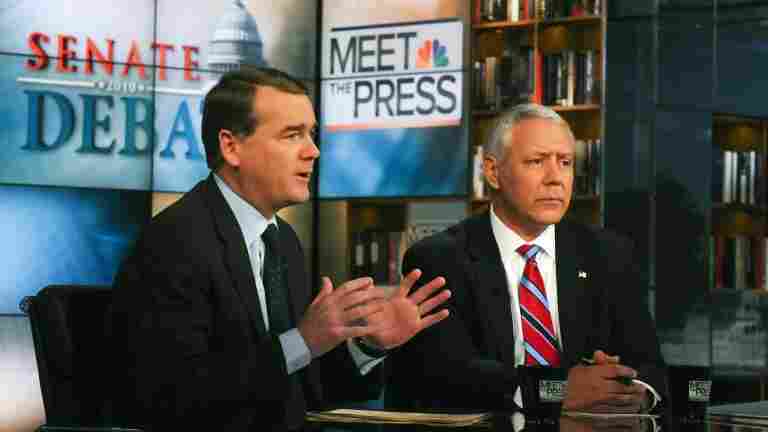 The race for U.S. Senate in Colorado has become one of the most expensive in the nation, thanks in part to the Supreme Court ruling last January that allows businesses and unions to spend as much money as they want on political campaigns.

The amount that outside groups have spent is approaching $30 million with less than a week before the election, according to data collected by the Campaign Finance Institute, a campaign finance policy think tank. On top of that, the candidates have raised more than $15 million -- most has gone to Democratic Sen. Michael Bennet, the incumbent. At last count, he's raised more than $11 million. His Republican challenger, Ken Buck, has raised nearly $4 million.

While many of the TV ads are coming from a variety of groups with generic-sounding names, they tend to follow the plot lines the candidates themselves have created. Each has tried to shape the public's opinion of his opponent.

Buck and groups that want him to get elected are painting Bennet as a big-spending liberal. One ad from American Crossroads, a group co-founded by Republican strategist Karl Rove, claims: "Bennet voted to spend an average $2.5 billion per day on things like the failed, pork-filled stimulus and Obamacare."

An ad paid for by American Crossroads, a group co-founded by Republican strategist Karl Rove.

According to the Campaign Finance Institute, groups like this have spent almost $8 million to help Buck. Bennet, on the other hand, has gotten most of his outside help from his own party. The Democratic ads tend to paint Buck as an extremist. One, from the Democratic Senatorial Campaign Committee, focuses on a statement Buck made during the primary. He suggested he wasn't a fan of the 17th Amendment, which led to direct election of senators. The announcer asks, "Rewriting the Constitution? Ending our right to vote? Ken Buck's just too extreme for Colorado."

Buck has since made it clear he supports direct elections.

Probably the best illustration of how the themes in these two campaigns have played out took place during a debate this past weekend. Bennet was given the opportunity to ask Buck a question.

"Since Ken has supported criminalizing abortion in cases of rape and incest," he said, "my question is who's going to jail, Ken?"

An ad paid for by the Democratic Senatorial Campaign Committee.

"I'll tell you senator, I don't think abortion is going to be criminalized any time soon," Buck responded.

Within a few seconds, Buck turned the conversation back to the issue he sees as an advantage. "You have once again tried to take this debate off topic," he said. "We're talking about jobs. We're talking about your vote on health care."

Voter Summer Crabtree says she was disappointed Buck didn't answer Bennet's question. "If he has a stance on an issue, he should feel free to go ahead and back it and voice his opinion on it." she said.

Crabtree doesn't belong to a political party and says abortion rights are important to her, so she'll probably end up voting for Bennet or Libertarian candidate Maclyn Stringer.

But for Republican John Schneider, the individual positions of the candidates in this race don't even matter because he considers this election a referendum on President Obama. In "a normal election cycle," Schneider says, he would probably vote for Bennet. "But ... that would give Mr. Obama more support in the Senate and he doesn't need it."

Schneider says he's most upset by the healthcare overhaul. That issue is frequently raised in ads against Bennet, who voted for the legislation.

Crabtree says she's about had it with the ads, "I mute them. I can't stand them. And anything I get in the mail I toss straight in the trash."

Money has poured into the Colorado Senate race because of what's at stake: Control of the Senate. The Democratic caucus now has 59 senators, the Republicans control 41 seats. There are 37 Senate seats up for grabs this year; 19 of those are currently held by Democrats. NPR Political Editor Ken Rudin rates 11 of those races in Democratic-held states to be either "toss-ups", "leaning Republican" or a "safe" pick-up for the GOP.

All that money spent on ads has left the Senate race in Colorado virtually tied, according to polls. And the biggest beneficiaries from that spending may have been the local media. The Gannett Co., which owns the leading television news station in Denver, says it expects advertising revenue for its broadcasting unit to jump by more than 20 percent this quarter over the same period last year, largely because of political ads.