Accessibility links
This Year's Campaign Ads Rate A 'Barely True' There were so many exaggerations and misstatements in the commercials run by candidates and interest groups that PolitiFact decided to give the whole gang a pretty low grade.

Bill Adair is editor of PolitiFact.com and Washington bureau chief for the St. Petersburg Times. In an interview for Thursday's Morning Edition, he told co-host Steve Inskeep why PolitiFact has slapped a "Barely True" rating on the 2010 campaign ad season. And Bill wrote about that ruling for PolitiFact.com and The Message Machine: 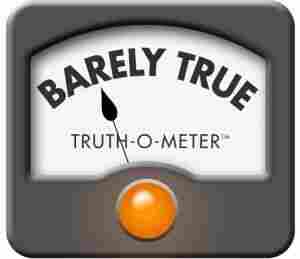 After rating hundreds of claims in the 2010 election -- from TV ads, debates, interviews and mailings -- we're giving an overall Truth-O-Meter rating to the campaign.

We rate it "Barely True."

In a majority of claims checked this fall by PolitiFact and our eight state partners, we found a grain of truth, but it was exaggerated, twisted or distorted. (We define Barely True as a statement containing some element of truth, but it "ignores critical facts that would give a different impression.")

To see how the truth got squeezed, just compare our historical averages with our numbers since Sept. 1, when the campaign kicked into high gear. Over the three-year history of PolitiFact, we've consistently used the same methodology to choose facts to check. We pick claims that we believe voters are curious about. If we think a voter would say, "Is that true?", then we'll fact-check it. Using that approach, "True" ratings have steadily accounted for 20 percent of our 2,500 Truth-O-Meter rulings.

But since Sept. 1, True ratings have accounted for only 10 percent.

As the True ratings have declined, we've seen an increase in Barely True (from 15 percent over the full three years to 21 percent since Sept. 1), as well as an increase in False/Pants on Fire ratings (from 28 percent to 34 percent). The numbers illustrate what our fact-checkers see every day: The claims often begin with a kernel of truth but the campaigns stretch it, twist it and, sometimes, blow it up.

Take a spin through our Barely True items and you'll see some examples:

-- Republican Christine O'Donnell claimed that Chris Coons, her Democratic opponent for Delaware's U.S. Senate seat,  "thought a 911 call should be taxed." But we found that was a big stretch because landline telephones had long been taxed to support 911 service. What Coons did was extend the tax to cell phones because of a sharp increase in their use for 911 calls.

-- In California, Democratic Sen. Barbara Boxer claimed that Republican challenger Carly Fiorina's "plan would mean slashing Social Security and Medicare." But we found there was sketchy evidence to support that. Fiorina hasn't said much about her ideas on Social Security and Medicare, and what she has said doesn't provide much proof of "slashing."

-- In the Pennsylvania Senate race, Republican Pat Toomey claimed that Democratic Rep. Joe Sestak "wants to bring back the death tax, letting the IRS take half of your savings when you die." We found that was an exaggeration because Toomey incorrectly implies the estate tax would apply to a large share of taxpayers and their entire estates. In fact, only the wealthiest Americans would pay the tax under the proposal that Sestak supports, and the proposal would exclude $3.5 million per person and $7 million per couple.

We've awarded many Barely Trues to the flood of ads we've checked from outside groups. They enjoy a once-removed status from the campaigns, and we've found the groups tend to push the envelope -- and exaggerate the truth.

More Ads That Aren't All That 'True'

Update at 7:45 a.m. ET, Oct. 28: During their conversation, Steve and Bill talked about two other ads. One, from Indiana Republican Senate candidate Dan Coats, earned a "Pants On Fire" rating from PolitiFact. The other, from Virginia Democratic Rep. Glenn Nye, was rated "Barely True."

Many of our Barely True ratings have been for cookie-cutter ads that rely on stock lines straight from the party playbooks: Democrats have accused Republicans of wanting to "privatize Social Security" and said they want to impose a national sales tax of 23 percent; Republicans have said Democrats voted to cut Medicare and that they vote "in lock step" with Nancy Pelosi.

In many ads,small white letters flash on the screen showing the date of a newspaper story or a congressional vote. Those citations are supposed to back up the claim, but we have often found they were only tangentially related or provided little evidence.

Lately, a growing number of claims haven't even risen to the level of Barely True. In the past two weeks, we've seen a surge of statements so wrong that they've earned "False" and "Pants on Fire" ratings.

In Wisconsin, Republican Reid Ribble earned a Pants on Fire for claiming, "I lost my health insurance and doctor because of Obamacare." But his insurance company actually decided to get out of the health insurance business years ago.

During an appearance on The Daily Show with Jon Stewart, Rep. Eric Cantor of Virginia, the No. 2 House Republican, claimed that in the past two years, Democrats "spent more money than this country has spent in the past 200 years combined." We sliced the numbers many different ways, but found his claim ridiculously false and rated it Pants on Fire.

In a debate for the West Virginia Senate seat, Republican John Raese claimed that under the new health care law, patients must first meet with "a bureaucrat." We found that was  another ridiculous falsehood about the health care law.

There are six days until the election. We're not optimistic that the claims are going to get any more truthful.