Accessibility links
The Dilemma Of Walking Away From A Mortgage Millions of people could decide to stop paying their mortgage because their home values have sunk far below what they owe, economists estimate. For one California couple, whose home is worth one-fifth of what they paid, the temptation to call it quits is very real. 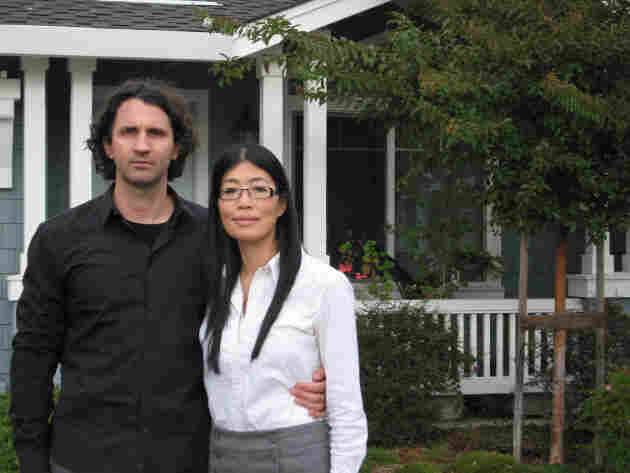 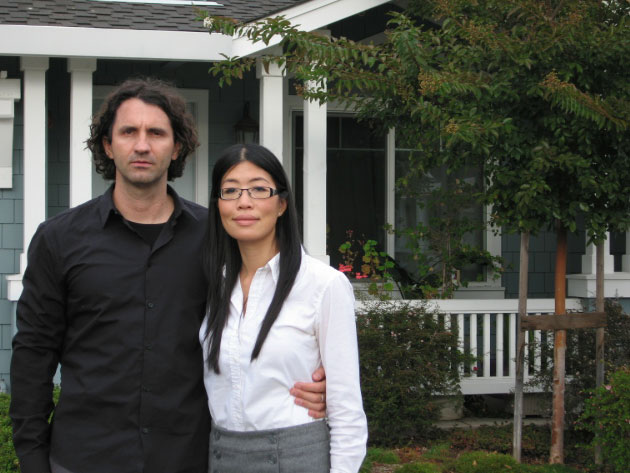 Grace Chen and her husband, Antonis Orphanou, stand outside their home in Mountain View, Calif.

To pay or not to pay is the question now facing some homeowners -- not because they can't afford their mortgage, but because they don't want to keep paying on a home that's lost value.

But even as they gain popularity, strategic defaults are highly controversial -- some might say immoral. About a quarter of American homeowners took out loans that are bigger than their homes are now worth, and some of them say it's simply irrational for them to keep paying the mortgage.

Grace Chen and her husband, Antonis Orphanou, have this debate about their own home. From the outside, there is nothing to flag them as troubled homeowners. They haven't lost their jobs. Their interest rate has stayed the same. They are not counted among the legions headed to foreclosure. In fact, they haven't missed a single mortgage payment.

But they're tempted to.

Chen is no financial novice. She's a CPA who works for a California venture capital firm, but, she admits they made a big mistake.

"We made a bad investment," Chen says. But she adds, "I'm from a finance background. It makes no economic sense for us to hold onto this asset."

This asset -- their home in Mountain View, Calif., bought for nearly $1 million -- is now worth $200,000 less, just three years later. They can't refinance because the value of the home has dropped so much.

"It's just frustrating, because I'm just trying to do the right thing," Chen says with a sigh. "But I think we have to take care of our own business, too, if we're not going to get any help."

The help they're asking for is a loan modification with an interest-rate reduction from their lender, Bank of America. For the past year, Chen has spent countless lunch hours on the phone with the bank. She wants the lender to reduce their interest rate.

Until now, it's been her husband who's made the argument for walking away. He points to similar-sized houses down the street that rent for a third of their mortgage payment.

"I personally feel like our money just evaporates; it's as if we're just throwing money away," Orphanou says.

Chen says she's usually the type to immediately pay all her bills online, but when it comes to the mortgage, she procrastinates.

"Sometimes, if it falls on a weekend, I won't make that payment until the following Monday. I mean, that's how it's gotten to me," she says. "It's like I don't want to give them the money until the last possible minute. Maybe it's going to be one day I'm not going to make that click. And it'll be like, 'Oh well, we just missed that payment.'"

The thing that holds Chen back from defaulting is her worry that a foreclosure would limit future job opportunities in her field, because employers often screen job applicants' credit.

The mere fact that people like Chen and Orphanou are considering a strategic default does not bode well for the housing market, which already stands on a shaky foundation.

William Wheaton, an economics professor at MIT who studies real estate, says lots of strategic defaults "would really mean another tidal wave" for the housing market.

Wheaton estimates about 2.5 million homeowners are at risk of strategic default. Buyers overpaid and lenders enabled and even encouraged the overspending, he says, so the banks "should share in the pain."

For Wheaton, that means pressuring banks to refinance homes, and allowing homeowners and lenders to share in the upside if the house is later sold at a higher price. He says this creates incentives for homeowners not to leave, and for lenders to meet them halfway.

This is not a solution the American Bankers Association supports.

"We believe people should meet their contractual obligations when they have the ability to meet them," says Robert Davis, the executive vice president of the banking group.

Buyer's regret is simply not a good reason to abandon a home, or leave a community with a vacant home, he says.

Chen says she's heard that argument before. She'd spent two hours in a heated exchange with a friend who told her she was wrong to seek any help at all -- and to even consider walking away.

"He felt like his taxpayer dollars are going to help people like me, and he didn't like that at all," she says, her voice a little raspy. "I get that. I get what he's saying."

And while she understands, she's not at all sure she and her husband are going to keep making those payments.