Accessibility links
TV Review - 'The Walking Dead' - From AMC, A Braaainy Zombie Drama On Halloween, a new show about a sudden infestation of zombies premieres on AMC. TV critic David Bianculli says the spooky series works because it's "beautiful and foreboding all at once." 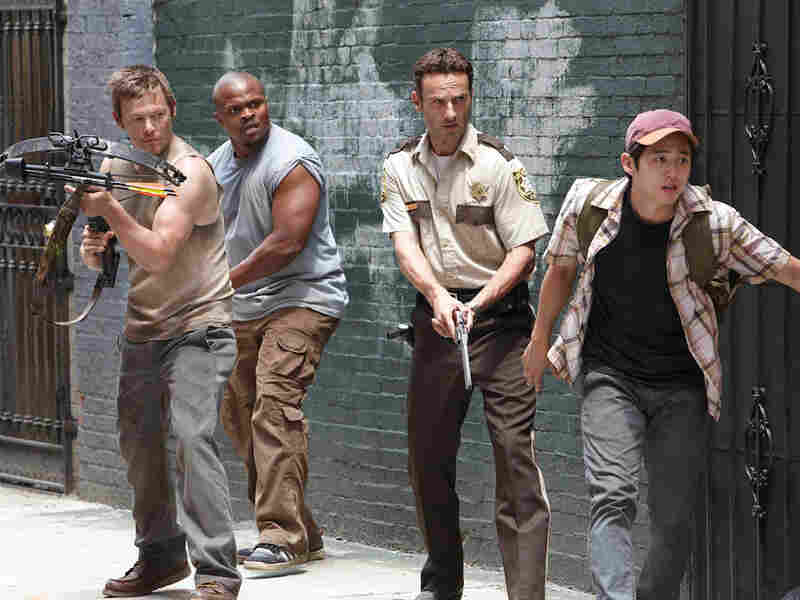 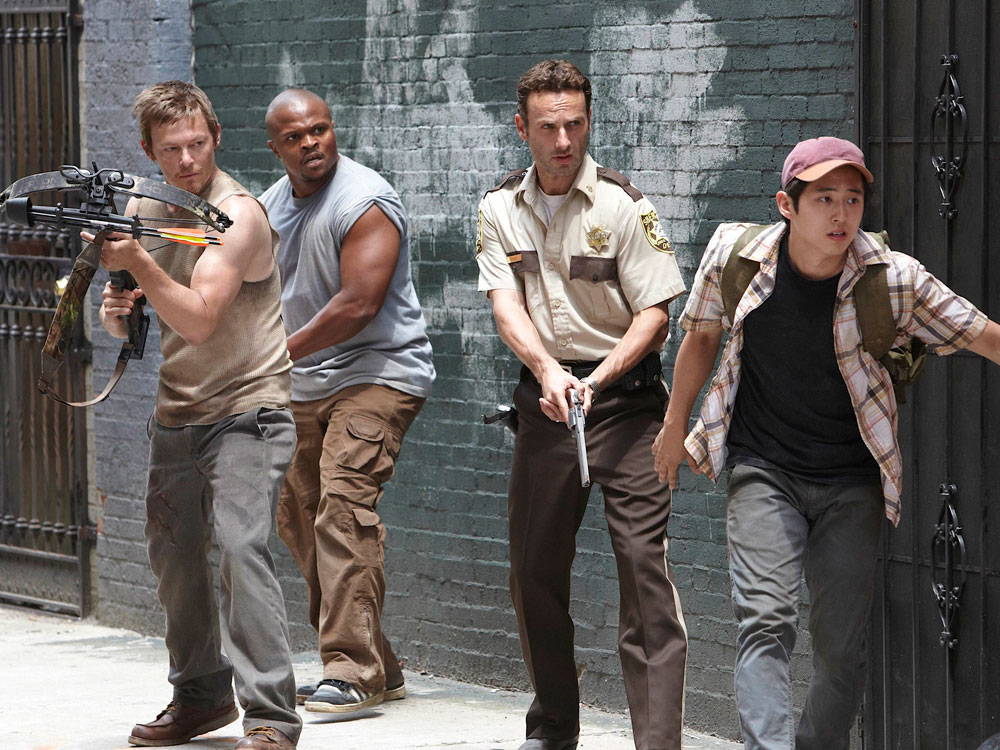 I remember when Buffy the Vampire Slayer premiered on The WB, and I had to almost beg people not to dismiss it out of hand. The more I described it, the less worthwhile it sounded: "There's this cute high-school girl, and she learns her destiny is to save the world from vampires and other evil demons. It's a vampire show, but not just a vampire show."

So here I am again -- this time not with vampires, but with zombies.

The Walking Dead, which premieres Halloween night, is the newest series from the AMC network, which so far has given us Mad Men, Breaking Bad and Rubicon. This new show comes with its own high pedigree: The premiere is written, directed and executive produced by Frank Darabont, of The Shawshank Redemption. Another executive producer is Gale Anne Hurd, whose production credits include The Terminator and Aliens. So she knows a lot about presenting tense, action-packed stories about relentless, seemingly unstoppable killers. And The Walking Dead is based on a long-running series of popular comics by Robert Kirkman. Of course now that I've mentioned zombies and comics, I realize I'm digging my own grave here.

Except in a zombie drama, there are no graves, just dead bodies. Dead bodies with bullets in their heads, or no heads at all. And undead ones -- along with the few remaining living people, who have to avoid the walking dead and eventually destroy them. 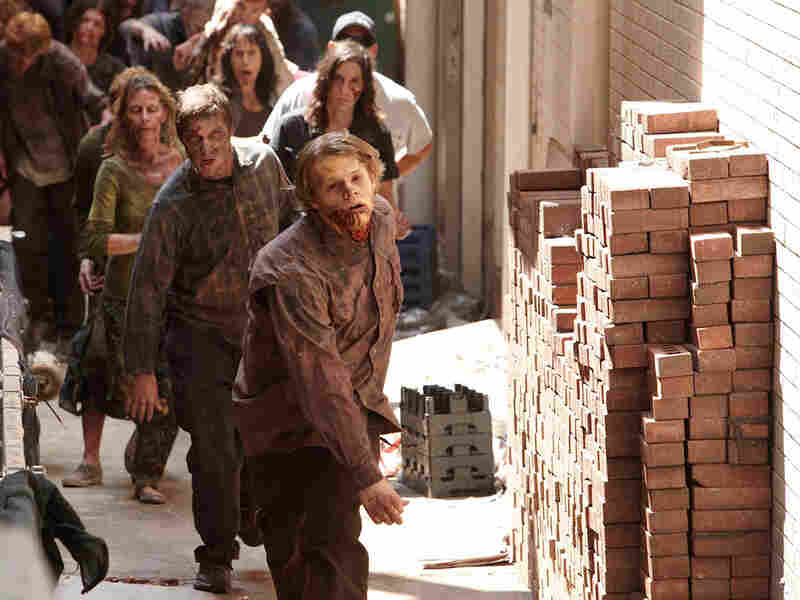 A zombie epidemic has taken over the world in AMC's The Walking Dead. AMC hide caption 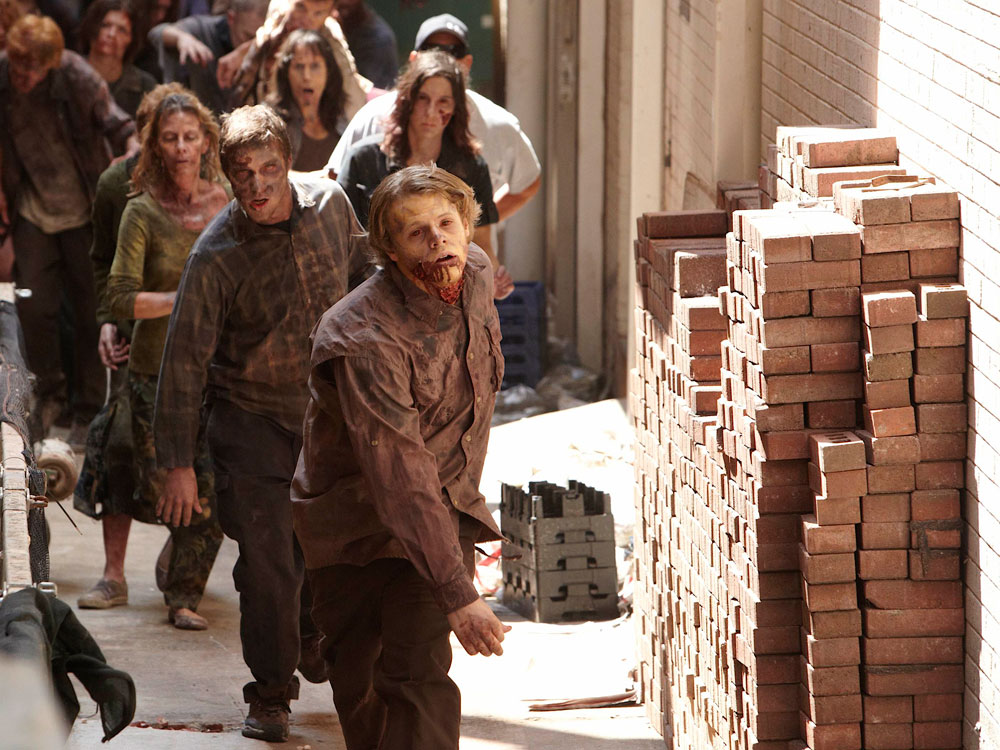 A zombie epidemic has taken over the world in AMC's The Walking Dead.

With sexy vampires all over TV and the movies, zombies are a tougher sell. This new television series makes it work by heightening the realism. There's no creepy horror music upping the emotional ante here. For the most part, there's no music at all, just a quiet, eerie, frightening silence, as we follow one of the few remaining humans as he literally awakens to this scary new world.

Andrew Lincoln stars as Rick Grimes, a deputy sheriff from Kentucky who's been shot in the line of duty. He falls into a coma, and when he wakes up in the hospital weeks later -- his body emaciated and with a noticeable growth of beard -- things aren't at all how they should be. There are no nurses to answer his calls for help. The clock in the room has stopped. The hospital is deserted and the hallways are messy. He comes across a body with much of its flesh ripped off like a side of beef. And then he sees the padlocked doors with the spray-painted warning, "Don't open. Dead inside"

And we keep following Rick, as he makes his way through the hospital, outside, and back to his home -- where his wife and child apparently have packed some things and fled. It's at that point, still very early in this 90-minute pilot, that Rick encounters the first other human survivors -- a man and his son who have taken to hiding in a nearby house. When they ascertain that Rick is human, they bring him inside, where the father fills him in on what has happened.

A lot of what makes The Walking Dead so striking a series is how visual it is. It's beautiful and foreboding all at once, with lots of scares too potent to spoil. And whether it's finding terror in the open daylight of a family farm or the familiar setting of a city street, this TV show finds lots of ways to give you the creeps.

The special effects are convincing. The violence, rather than being cartoonishly overdone as in the Spartacus series, is powerful, credible, and often shockingly forceful. (This is not a series for young children.)

But because the characters are invested with such emotion, and the story unspools so empathetically, The Walking Dead is much, much better, and more truly dramatic, than you might expect. You watch this, and there are times when you think, "What would I do if this were happening to me?"

My answer, way too often, is: I'd die. Your results may vary.