Accessibility links
Earning Afghans' Trust The 'Big Challenge' For U.S. Soldiers with the 101st Airborne Division in Afghanistan are trying to secure villages once occupied by the Taliban and laced with roadside bombs and booby-trapped buildings. Security is only half the battle, however, as many Afghan villagers are fearful of Taliban retaliation. 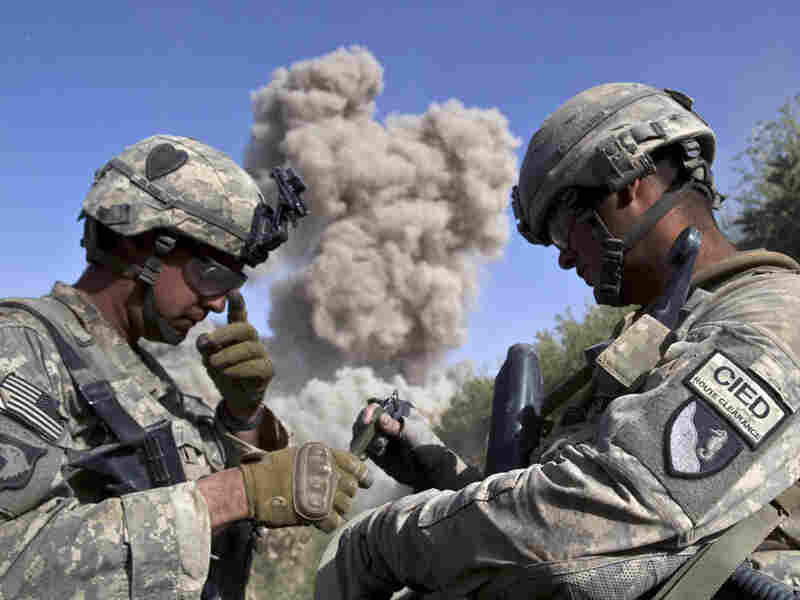 Soldiers from Chaos Company, 101st Airborne Division, destroy a building in Kandahar. Troops from Headquarters Company recently entered the abandoned Kandahar village of Haji Abdu Rauf to destroy anything useful so the Taliban don't use it as a safe haven. Massoud Hossaini/AFP/Getty Images hide caption 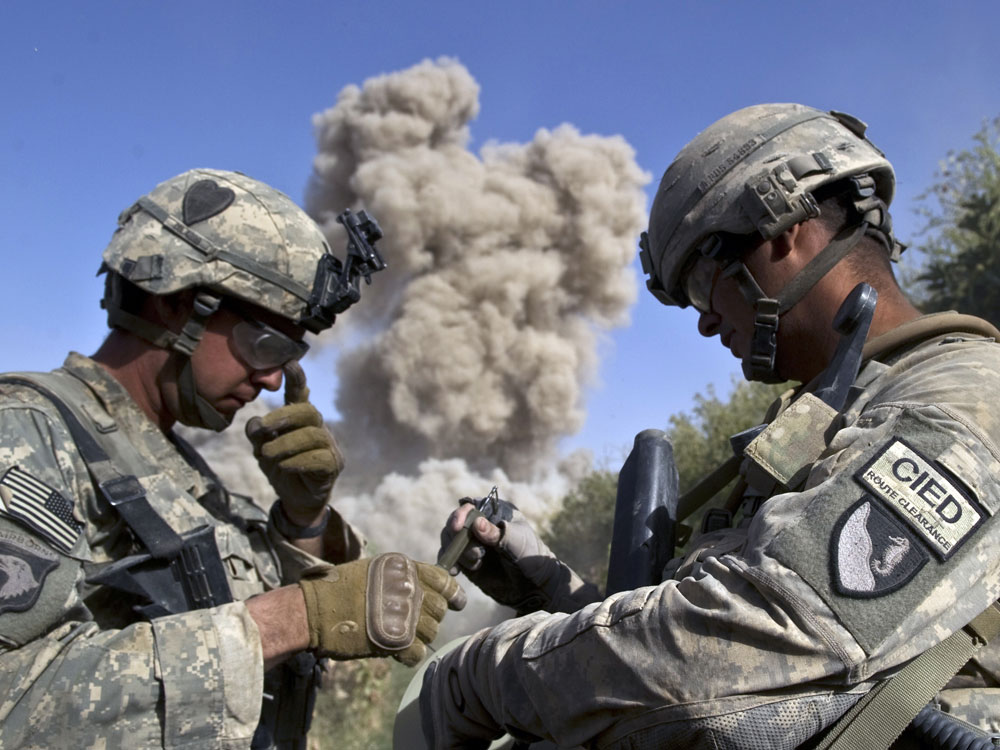 Soldiers from Chaos Company, 101st Airborne Division, destroy a building in Kandahar. Troops from Headquarters Company recently entered the abandoned Kandahar village of Haji Abdu Rauf to destroy anything useful so the Taliban don't use it as a safe haven.

In Afghanistan, soldiers from the "Strike" Brigade of the 101st Airborne Division are continuing their monthlong sweep for Taliban fighters in an area called the "Green Zone." It's a 10-mile stretch of orchards and fields along the Arghandab River, northwest of the city Kandahar.

The unit, Headquarters Company, is trying to secure Afghan villages and win the support of locals in a territory the Taliban left riddled with roadside bombs and booby-trapped buildings.

An hour before dawn on a recent morning, headlights from armored vehicles illuminate the soldiers during roll call at Combat Outpost Ashoque. The outpost is little more than a one-story concrete building surrounded by sandbags and razor wire.

Across the gravel parking lot, Afghan soldiers are assembling, too. Army Sgt. 1st Class Ted Maust is working with a translator to get them ready, but there is confusion about how many Afghans will come on today's mission alongside the 50 Americans.

The armored convoy departs the outpost, and heads west on one of the few asphalt roads in the country. The Americans call it Route One.

They're headed just a couple of miles down the highway to an abandoned village, hidden among the trees between Route One and the Arghandab River. It's a place the American troops have never been before.

It's that deep-seeded fear of the Taliban. They've been living with it so long, everybody suspects everybody else.

Just a few months ago, this was a no-go zone. It was Taliban territory until units from the 101st Airborne Division swept through the area and pushed the Taliban farther west, away from Kandahar.

"We're just going village to village, checking them out, knocking on the front door," Maust says.

The problem is the Americans can't find the enemy. The Taliban fighters are melting into the general population and, the U.S. troops suspect, keeping an eye on the Americans.

"They're just waiting for a weak spot, a sweet spot to exploit it," Maust says. "We don't want to provide them that."

The U.S. forces also don't want to provide the Taliban any kind of safe haven -- and that includes the abandoned village, called Haji Abdu Rauf. So the American objective today is to destroy anything useful in the village.

But even this demolition mission is dangerous. The dirt road leading to the village is laced with roadside bombs called IEDs, or improvised explosive devices. There are reports that even the houses are booby-trapped.

"We're basically going to clear out the IEDs, clear out the houses," says Capt. Brant Auge, a West Point graduate from Mississippi who is leading the mission. "So now the IEDs are no longer a threat, and the houses can no longer be used by the enemy."

They use a special tool: a rocket that shoots a line of explosive charges. The line looks like a thick white fire hose that flies. It is propelled about 100 feet in the air, above the dirt road, and then drops to the ground with a blast. The American soldiers say three roadside bombs were destroyed in the process.

He is from a different religion. If he was my own religion, he would be my brother.

It will take many more before this dirt road to the abandoned village is cleared of bombs.

The Afghan soldiers, meanwhile, seem disinterested. Many stay near their trucks. Others relax on the ground.

Not far away, across Route One at another village, a cluster of Afghan men and children watch the American fireworks. Auge turns and sees them, then crosses the highway with some American and Afghan soldiers.

He approaches a village elder, named Said Gull, who squats next to a wall. Teenagers sit on the wall above him, and children scurry about.

"How's everybody doing today, except for the explosions?" Auge asks.

Through an interpreter, Gull complains about the explosion. "They -- women and children -- were crying," he says.

Auge explains they are only there to help. "We're continuing our operation to make things safe for you," he says.

The Fight To Win Support

This is crucial moment for the unit's mission today: The U.S. military strategy calls for providing security for Afghan villagers like this and then winning their support for the Afghan government.

But Gull's not feeling secure. He fears Taliban retaliation, and he says no one can work the fields because of the fighting and the bombs.

Auge says he can provide work, like rebuilding the area.

When asked what he thinks about the Americans -- whether they should stay or go home -- Gull says that Afghans do not need the Taliban or the U.S. forces. He then turns to an Afghan officer standing next to Auge and says, "This man is my brother. He will fight for me and with me."

With Auge, it is different, Gull says. "He is from a different religion. If he was my own religion, he would be my brother." 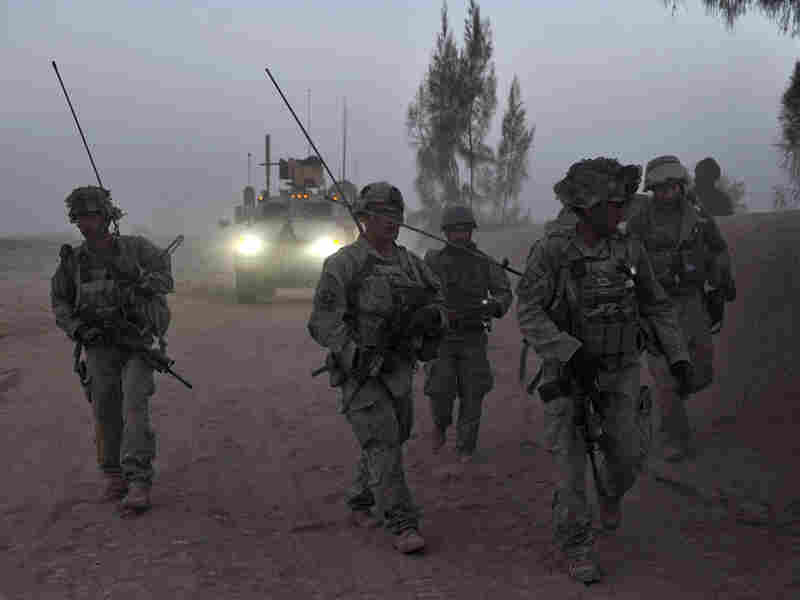 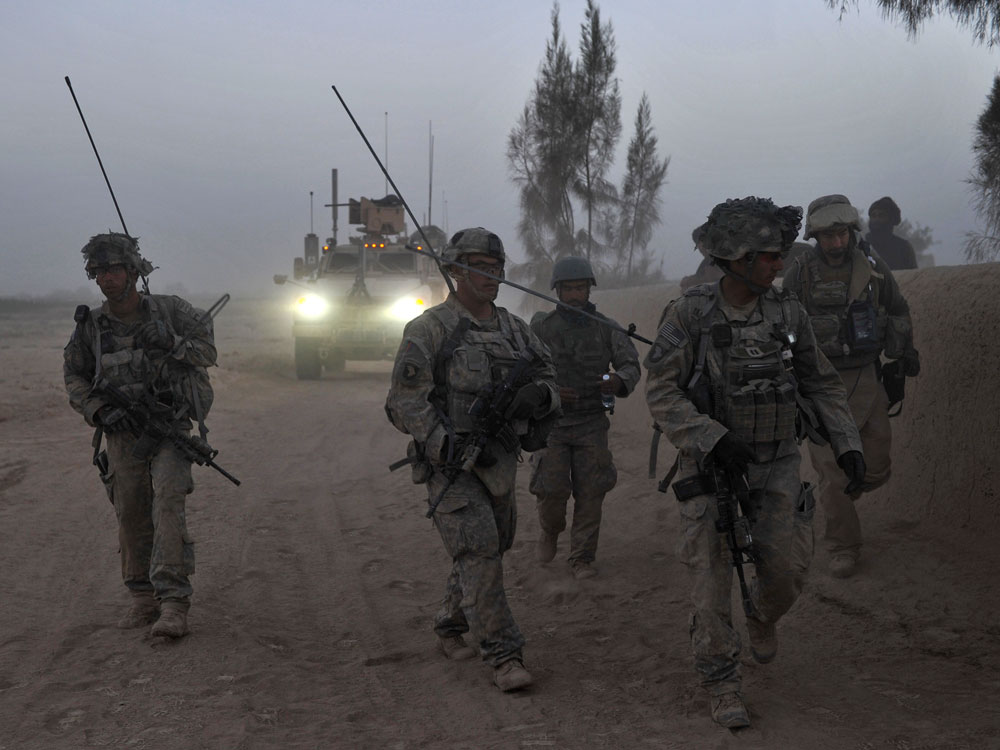 Gull's sentiments represent a continuing problem for the Americans. Some Afghans view them as occupiers and will never accept them.

After about 30 minutes of conversation, Auge turns and crosses the highway to rejoin his unit. The U.S. soldiers have cleared the dirt road of IEDs and have reached the abandoned village.

From a small bridge -- partially destroyed by the explosives -- Auge talks about why Afghans are still wary.

"They still get a little antsy if we're in too much," he says. "It's that deep-seeded fear of the Taliban. They've been living with it so long, everybody suspects everybody else."

Auge says Afghans view even their own family members with suspicion. He recalls that one Afghan man told him that even his own son could secretly be a member of the Taliban and report him to the Taliban if he worked with the U.S. forces.

In all, it takes Auge's unit about 12 hours to destroy the roadside bombs on 700 yards of dirt road leading to the abandoned village. It takes more than two days to destroy the dozens of houses -- some of them booby-trapped -- that the Taliban left behind here.

That might have been the easy part. Winning over the locals is another thing entirely.

"Later on, if people want to move back and rebuild, we're here to support that and help them out with that," Auge says.

But he doesn't see that happening anytime soon.