Accessibility links
Master Of The Leaf: Preserving China's Music Dadawa, a Chinese pop star and ambassador for the United Nations Development Program, is on a mission to help preserve minority music. Her travels took her through six of China's most far-flung provinces to find masters of vanishing musical traditions. 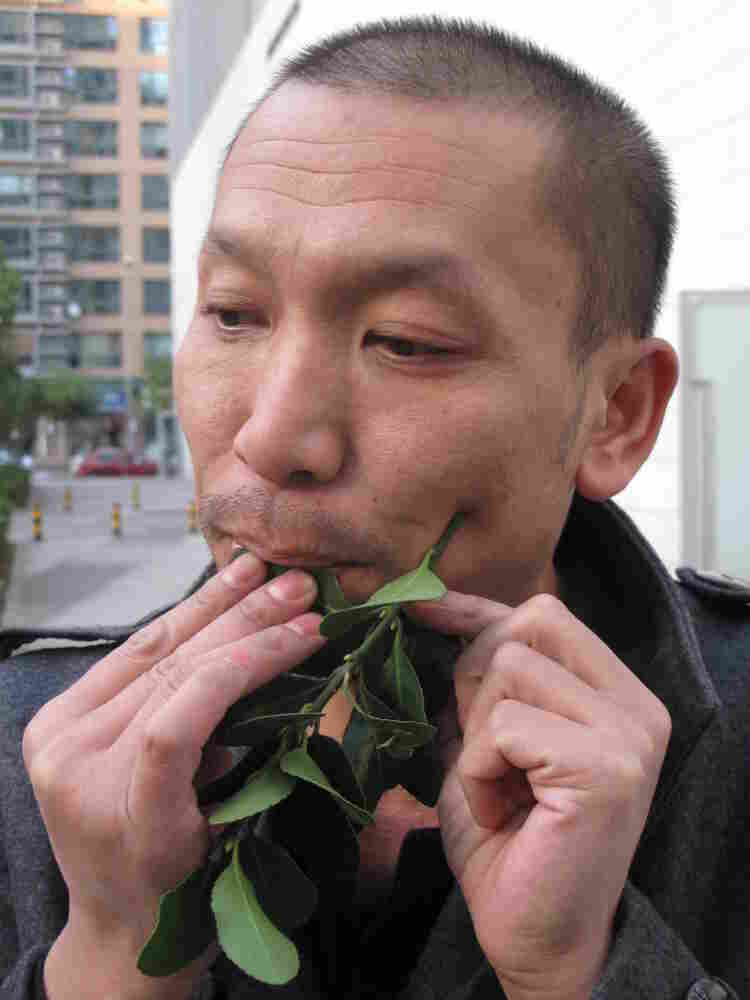 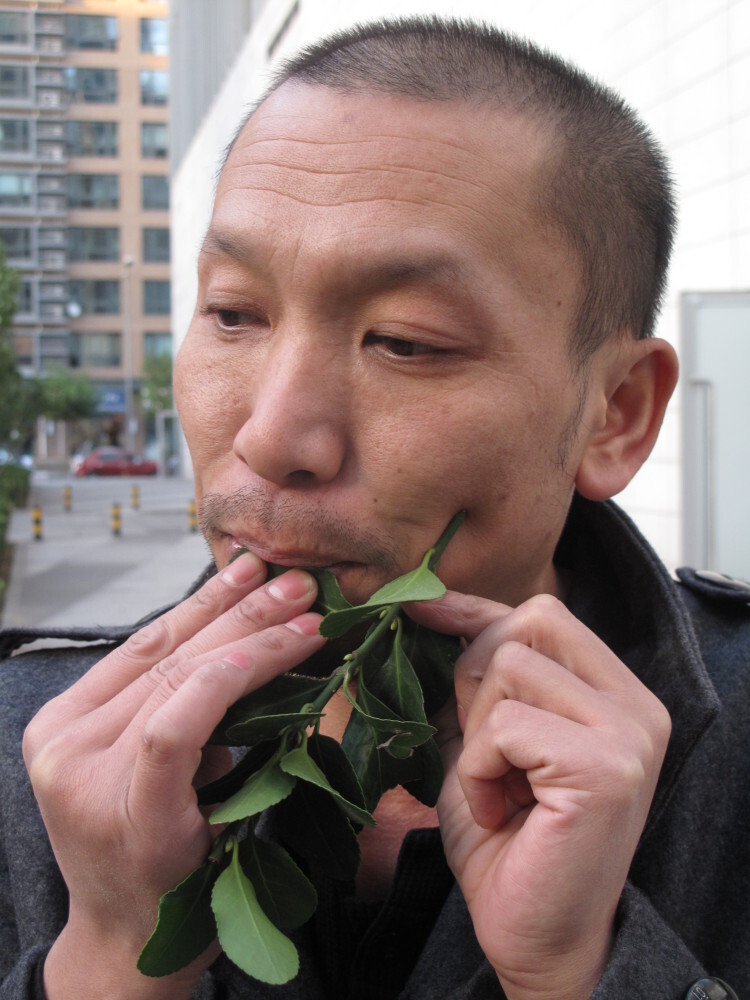 Classically trained composer Guo Yong says it took him years to see the value of his Buyi minority music, such as blowing on leaves to mimic birdsong.

On a chilly Beijing afternoon, musician Guo Yong is rooting through some bushes, choosing an instrument. He is a master of the common or garden leaf. Picking an average leaf and flicking it to check its elasticity, he puts it up to his mouth and blows against the surface, mimicking birdsong.

This skill catapulted the classically trained composer onto the stage of Beijing's egg-shaped National Theatre. He's among a number of ethnic minority musicians who are working together with Chinese pop singer Dadawa to save dying musical traditions from extinction.

Guo is from the Buyi minority, from Guizhou province in Southwestern China, and this is where he learned his leaf skills.

"In Guizhou, it's very mountainous," Guo says. "Sometimes it's boring to walk by yourself, so you grab a leaf and blow on it and copy the birds. Sometimes you use leaves to call to people, to talk to them, since with leaves the sound goes farther."

Guo says it took him years to see the value of his own traditional culture.

"At college, I studied orchestral composition, but then I slowly learned that the things I removed myself from are the most precious," Guo says. "Our way of thought is not the same, our religion. Maybe it's because Westerners believe in Christianity; they think of grand works. Growing up in the mountains, we couldn't imagine big orchestras. We think of natural things: bamboo banging, cows mooing. These sounds are also music." 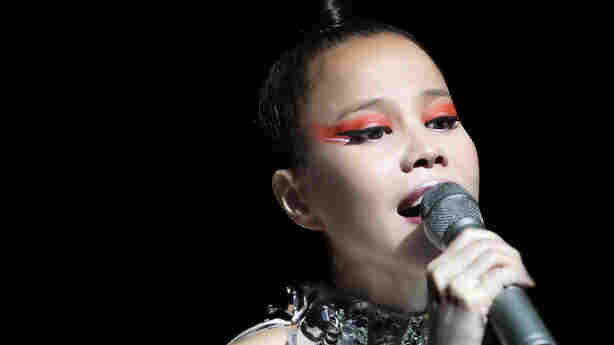 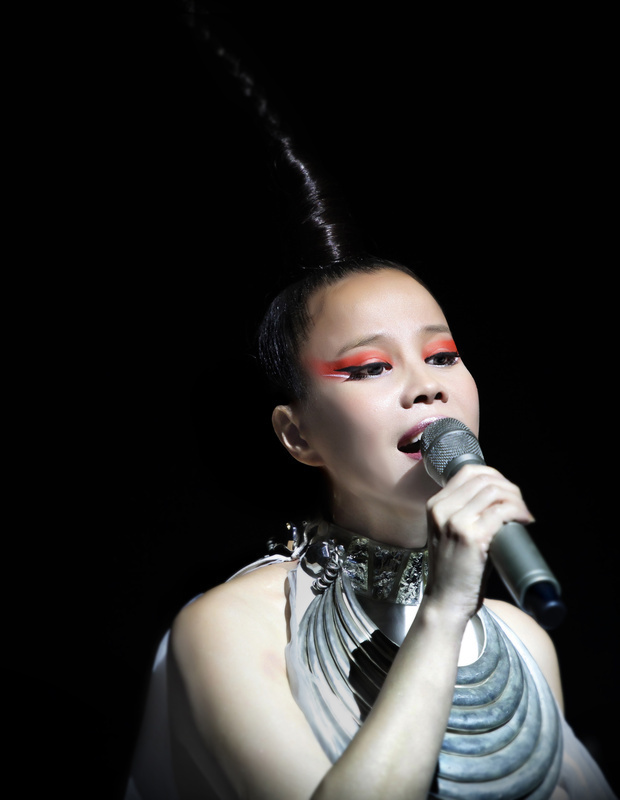 Dadawa performs on the Hear the World: Dadawa and Ethnic Music Masters Tour.

A Mission To Preserve

He performs on stage with a number of ethnic music masters, gathered together by Dadawa, who's both a Chinese pop star and an ambassador for the United Nations Development Program. She's on a mission to help preserve minority music, and donating profits from her CD and tour to help 400 ethnic music masters take on students. Last year, Dadawa went on a road trip through six of China's most far-flung provinces to find masters of vanishing musical traditions.

"Your ears will lead you to the right place," Dadawa says of her methods, laughing. "It's like a trip full of discovery. We just followed the sound. Any possibility to listen to special music, we went there." 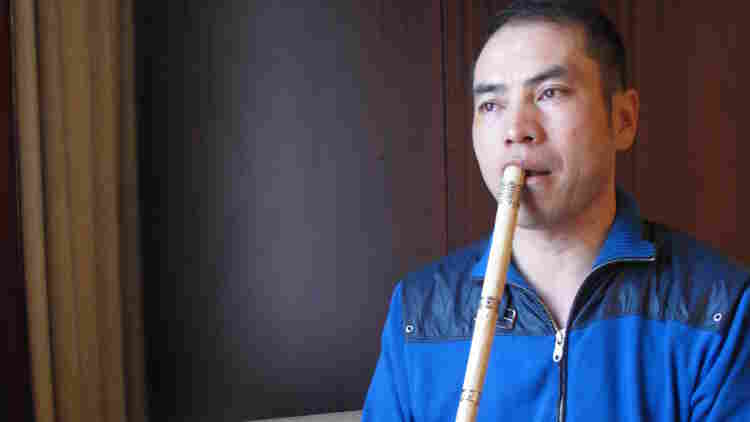 Aalatengwula demonstrates how to play the modentsuur, an instrument into which you need to blow at the same time as throat-singing. Louisa Lim/NPR hide caption 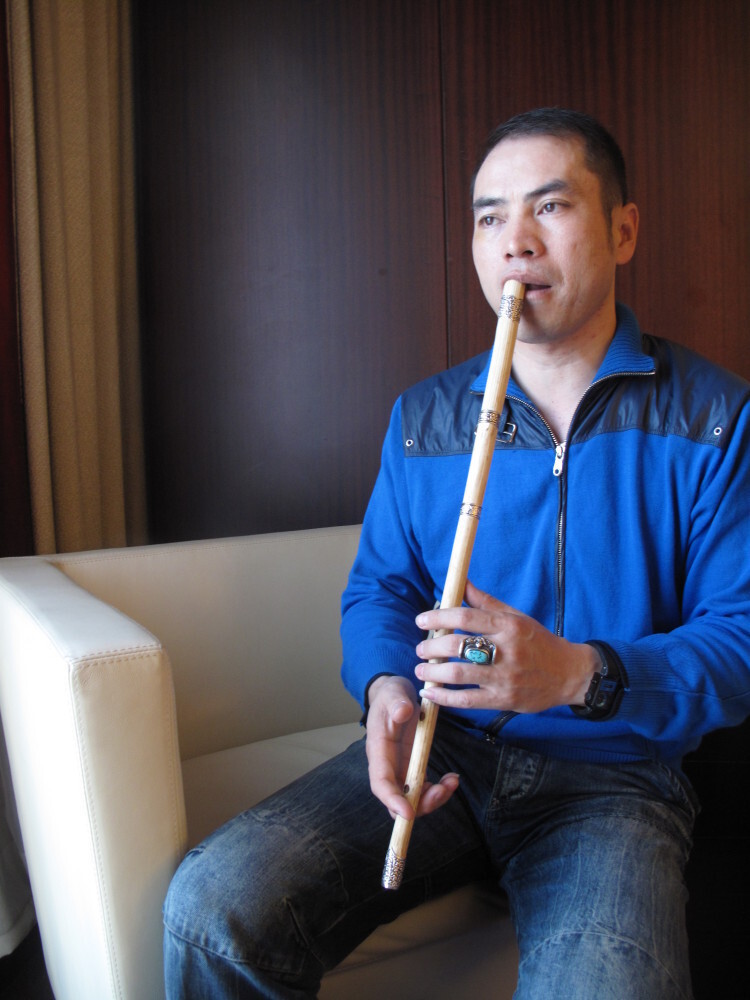 Aalatengwula demonstrates how to play the modentsuur, an instrument into which you need to blow at the same time as throat-singing.

Her ears led her to musician Aalatengwula from Alashan in Inner Mongolia. He plays the horsehead violin, that most Mongolian of instruments, and he's one of the very few people in China able to coax music out of the tsuur or modentsuur -- a conical tube you blow into at the same time as throat-singing (or khoomei) to produce two noises at once.

"Lots of people can make a sound with this instrument, but very few people can actually create a whole melody," Aalatengwula says.

When he first heard the mysterious sound created by the modentsuur, he was hooked and decided he wanted to learn how to play. But then he discovered that it had already died out in Inner Mongolia, so he first went to Outer Mongolia, then to the Altai Mountains in Xinjiang to find a teacher. The elderly master who taught him has since died.

"In Xinjiang, my teacher used it to create the sound of the waves ... and the hoofbeats of a horse," Aalatengwula says.

Aalatengwula's mother is herself an expert in Mongolian long-tone folk songs. He says it's a vital but endangered part of the culture. 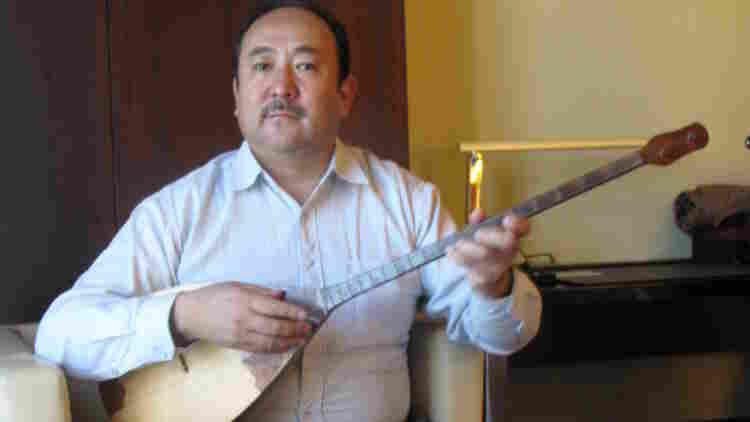 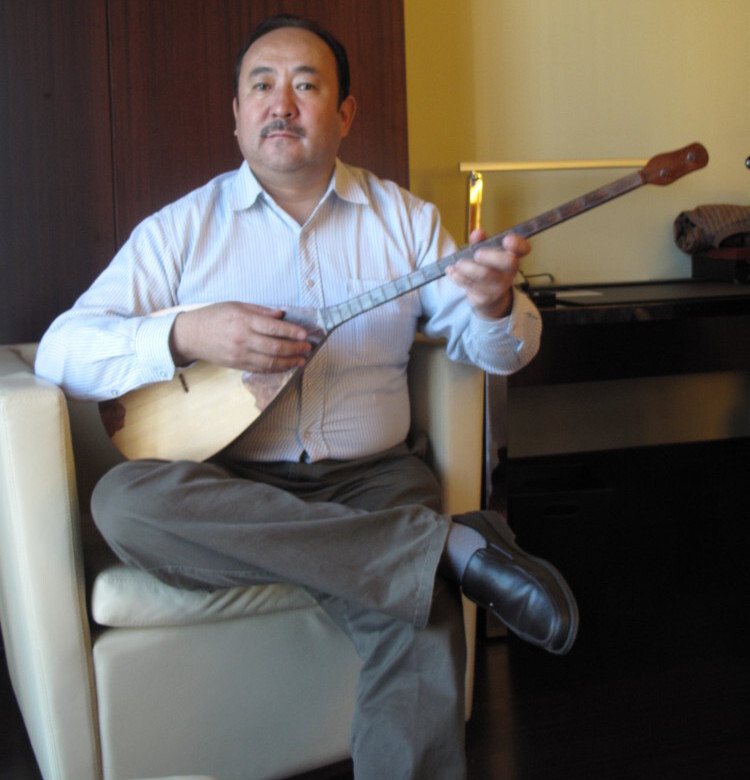 "My mother is illiterate, but she knows every word to 156 folk songs," Aalatengwula says. "Mongolian people don't have many written historical records. Everything is in our songs. But now, lots of Mongolian kids go to Chinese schools, and they can hardly speak or write their own language."

China's educational policies for its ethnic minorities have made headlines lately, with protests by Tibetan students over new rules that would marginalize the use of Tibetan language in the classroom. The protests highlight Beijing's strained relationship with its ethnic minorities. But these musicians are more focused on saving and popularizing their dying arts, rather than dissecting the politics of music.

One virtuoso performance is from Ku'ermanjiang Zhikeriya, a Kazakh from Xinjiang who plays the dongbula, a two-stringed guitar with a bowl-shaped body. He seems almost unable to talk without plucking at the dongbula strings or cradling his precious instrument, which he describes as "the soul of the Kazakh people." He says most Kazakhs can still play the dongbula, but many other traditional instruments are already lost, even to his professional music troupe.

"We play around 20 instruments in our troupe," Ku'ermanjiang says. "But there are 30 other traditional instruments that we've already lost. We don't even have them anymore."

These performers are careful not to blame Chinese government policies. In some cases, they say the government has helped support traditional culture. Rather, they blame a complex mix of modernization, westernization and new technology.

"I used to think my own culture was crude and backward," Guo says. "But now I've sung our mountain songs in our national theater. That gives me self-confidence to pass down our music to others." 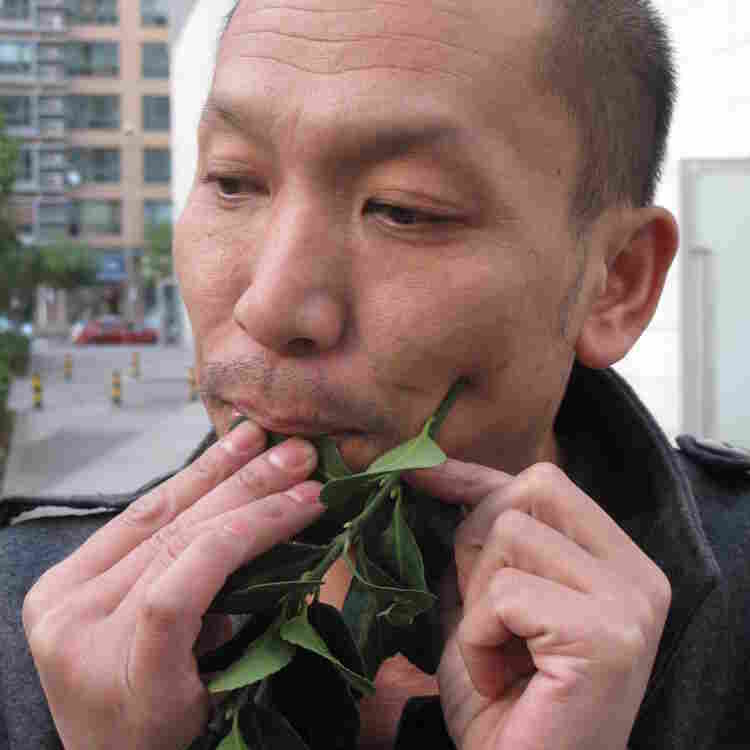 Classically trained composer Guo Yong says it took him years to see the value of his Buyi minority music, such as blowing on leaves to mimic birdsong.