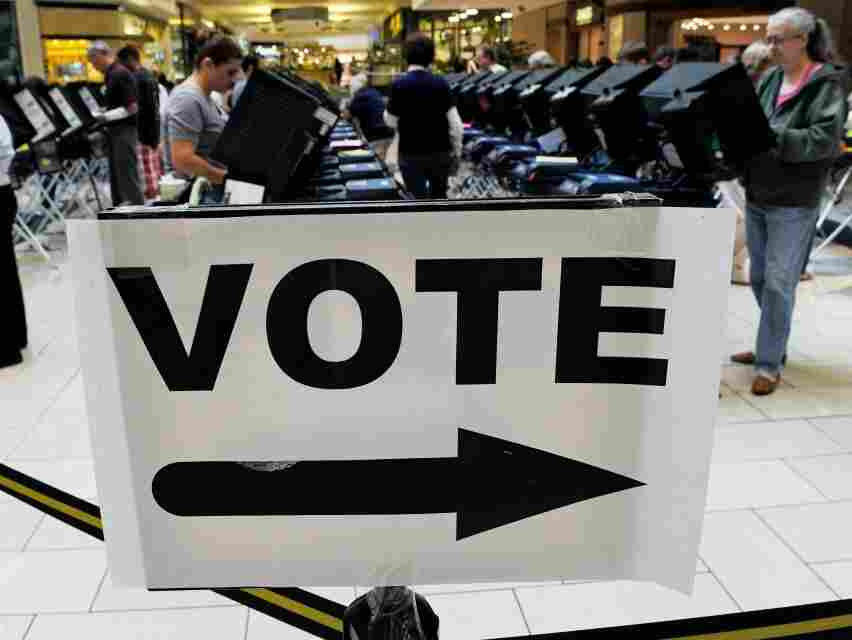 Nevadans vote early at the Meadows Mall in Las Vagas on Thursday. Senate Majority Leader Harry Reid is locked in a tight race against Republican Sharron Angle, who is backed by the Tea Party. Ethan Miller/Getty hide caption

No midterm election likely has higher stakes than the U.S. Senate race in Nevada where Senate Majority Leader Harry Reid is up against Tea Party favorite Sharron Angle, a former state assemblywoman who even some fellow Republicans find too extreme.

Polls show a dead heat, and Nevada voters have until Friday night to cast early ballots; many already have.

"I'm afraid of her," Smith said. "She's out there, as far as I'm concerned. It's not that I like Harry that much, but, I'm just leery of Sharron."

"He's brought jobs here," he said. "As much as people think he hasn't, he has. There's been a lot of jobs brought here."

That's not how Angle supporters see it.

Robert Rendon, a registered Republican, says he was willing to vote for anyone, as long as it wasn't Reid:

"Look at the situation he put us in. I mean, the highest in unemployment, the highest in losing homes, people losing their houses, I mean, Jesus Christ, he ain't helpin' us, that's for sure," Rendon said.

"Of course, I would've voted for almost anybody to try to get rid Of Harry Reid," she said. "I do not like Harry Reid."

Such resentment, says University of Nevada political scientist David Damore, is precisely why Reid, for all his power in Washington, could well be toppled by his fellow Nevadans.

"What we've seen in Nevada, I think, is [what] you've seen in a lot of other states ... just this sort of anger, this inchoate anger lashing out at the establishment; that if you're establishment, you are part of the problem," Damore said.

At a recent get-out-the-vote rally in Henderson, Nev., Reid seemed to feel he had to defend his record even to supporters.

"We've been going through a lot in Nevada," he said. "For 20 years, we were at the top of the economic food chain, and when Wall Street collapsed, we fell further than anyone else.

"But I want everyone to know here it isn't a secret, I didn't cause the financial collapse."

The one determining factor for who's going to win is going to be about who has effectively made the election about the other person.

Later, Reid explained why many voters believed he hadn't done enough for Nevada.

"I've done the best I can, doing everything I can to help the state of Nevada, but whoever is concerned about my not doing enough should understand that Sharron Angle has committed to doing nothing," Reid said. "She wants to throw sand in the gears, she wants to slow things down, she wants to get rid of Social Security, Medicare."

"The one determining factor for who's going to win is going to be about who has effectively made the election about the other person," Valenzano said.

While Reid has been going after Angle in public gatherings across the state, his Republican opponent did not respond to an interview request.

Angle has instead been flooding the airwaves with anti-Reid ads that hit the illegal immigration hot button.

One out of four voters in Nevada is Hispanic, and some Republicans say Angle is doing their party no good by running such ads, which Latino leaders have condemned.

"Her position on Hispanics is outrageous," he said. "You know, she has no desire to bring them into the process, and I think the Republican Party recognizes that they have to move into that mainstream to be successful, and so I just think it would be a tragic mistake for Nevada to have that woman in the United States Senate."

But Angle may also win over more voters than she alienates with her ads and as for who'll come out on top next Tuesday, all bets are off.