Accessibility links
College Holds Midnight Classes To Meet Demand Across the country, many community colleges are experiencing increased enrollment as the economy tightens. To meet student demand, one suburban Maryland college has come up with an innovative solution: midnight classes. 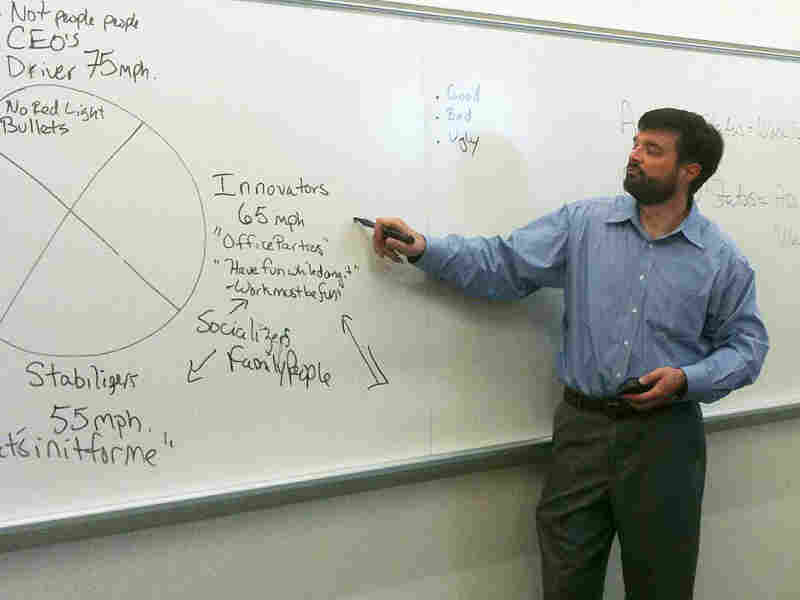 A community college in Maryland has joined a growing trend nationwide: midnight classes.

Inside a brightly lit classroom, professor Paul Vinette stands near a chalkboard making comical noises. He is trying to keep his "Introduction to Psychology" class engaged and awake.

His class begins at midnight and ends at a yawn-inducing 3 am. Kory Fox-Ponting is 1 of 10 students taking the Wednesday course.

"I'm young. I'm always up at this hour anyway, either playing video games or doing work or working on something. It's just an hour [when] my mind's not resting, which is what most people are doing," Fox-Ponting says.

'A Bunch Of Night Owls'

Located in suburban Maryland by the Chesapeake Bay, Anne Arundel Community College has about 17,000 students. Like many community colleges, its enrollment has increased as the economy has tightened.

Bunker Hill Community College in Boston and several Midwestern schools have led the way with midnight and 5 a.m. courses, according to Norma Kent, a spokeswoman for the American Association of Community Colleges, which represents 1,200 institutions across the country.

It was the complete opposite of what I feared, which was going to be trying to drag a dozen students as if they were dead bodies through the mud at 1 in the morning.

"[Other community colleges] have seen [late-night courses] as a viable way to serve students. And so if students are going to come at those hours, we're gonna be there for them," Kent says.

To keep his students alert, Vinette uses everything from sound effects to a buffet with coffee and snacks. The class gets a 15-minute break, although he says most students do not need it.

"It was the complete opposite of what I feared," Vinette says, "which was going to be trying to drag a dozen students as if they were dead bodies through the mud at 1 in the morning. And it's quite the opposite. No one's tired. No one's sleepy. I got a bunch of night owls in here."

The students have different reasons for taking a class at this time of night. Cynthia Marshall, a homemaker in her late 40s who travels several hours commuting each way on mass transit, hopes to re-enter the job market.

Ashley Beck, 25, is married with two small children. Her husband attends the police academy by day, while she pursues her degree at night.

"There's not a lot of kids in the class, so the teacher-to-student ratio is a lot better," Beck says. "And you don't have to, like, raise your hand and wait for 50 million people to ask questions. It's easier to get the information you wanna get."

Zachary Herd, 19, admits he takes naps to handle the class. Psychology is a required course, but Herd is selective about what subjects he would tackle at this hour.

"I wouldn't take any math class at midnight. It's just not something I wanna do at midnight," Herd says.

Other late-night considerations include driving home around the same time as "last call." While driving home late one night, Kory Fox-Ponting was pulled over by a police officer.

"And I said [to the police officer], 'Hey, you won't believe me, but I just came out of class.' [It was] 3 in the morning," Fox-Ponting recalls.