Accessibility links
First Listen: Cee Lo Green, 'The Lady Killer' Cee Lo returns with a solo album starring a new character, The Lady Killer. The first single from the record, "F--- You," was a huge viral hit over the summer, and now you can stream the entire record until its release on Nov. 9. 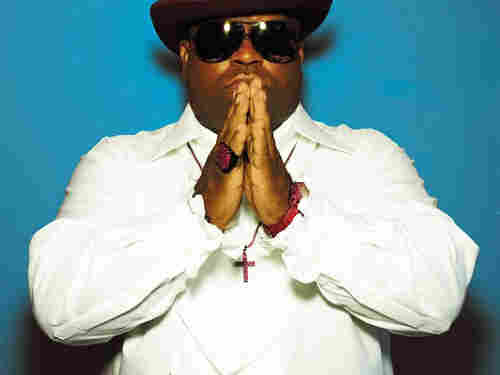 On a Thursday in mid-August, Cee Lo Green leaked the first single from his forthcoming album, The Lady Killer. It casts his meaty tenor in the role of a vindictive, jilted lover who bluntly dresses down his ex's new man, set to the sheen of a classic R&B track; all of this was tailored specifically for the medium of YouTube, accompanied by an animated scroll of its lyrics. By the weekend, the song -- and news of the song, and general approbation for the song -- had spread like wildfire.

Not incidentally, the track is titled "F--- You."

It's a fun ploy for attention (watch the music video, which appeared later), but considered amid a career filled with left turns, it's only strange by a matter of degree. Here's the man who came to prominence as the personable sing-song rapper in Goodie Mob, an earthy, down-home purveyor of Southern rap; who broke away to launch a solo career on the zanier fringe of hip-hop and/or neo-soul; and who reached the mainstream -- surprise! -- as the full-fledged singer of Gnarls Barkley, the eclectic/eccentric duo behind "Crazy."

Now, Cee Lo returns as a new character: "When it comes to ladies," he says in the spoken-word intro, "I have a license to kill." It's not a new persona in the history of pop culture; fittingly, these are songs with more than a few echoes of earlier eras. Soul music's sonic signifiers -- ringing guitars, real drums, sweeping strings and brass -- figure heavily, even when studio-rearranged to the point of anachronism. Its lyrical tropes are there, too, with songs about love lost, won, preserved, sought after and otherwise discussed. Cee Lo's signature croon fits snugly under this polish.

Of course, Cee Lo has personalized this aesthetic. The twangy "Love Gun" sounds lifted from an old-school spy thriller, "Fool For You" features a staccato Motown groove and "Old Fashioned" swoons with the oohs and aahs that its name suggests. From seeking a night of action in the disco-infused "Bright Lights Bigger City" (the second single) to proclaiming his sincerest affection in "No One's Gonna Love You," Cee Lo's Lady Killer is at once outlandish and a familiar male archetype -- just another guy. Even in "F--- You," he comes off as more comically self-deprecating than offensive; like much of Cee Lo's work, the freak in him comes through with a wink.

The Lady Killer will stream here in its entirety until its release on Nov. 9. Please leave your thoughts on the album in the comments section below.