Accessibility links
Last Hope Some people swore that the house was haunted. Poor old thing. It certainly looked like it was. The porch was crooked and sagging. The shutters were half hanging off, and the roof was riddled with holes of all shapes and sizes. 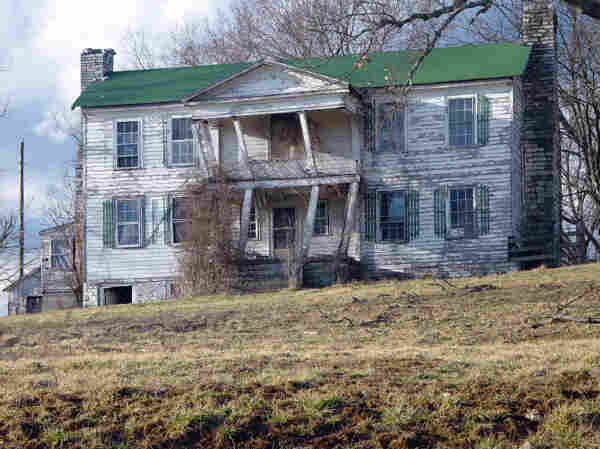 Some people swore that the house was haunted. Poor old thing. It certainly looked like it was. The porch was crooked and sagging. The shutters were half hanging off, and the roof was riddled with holes of all shapes and sizes.

It looked so sad... like it was trying to remember when families had started abandoning it. Once she was beautiful and brand new, then, after years of being useful, the residents became fewer and further in between. It seemed like, all of a sudden, there were more animals living there than humans.

Then, one day, HE came walking up the long, dirt driveway. Oh, God! A human! If she could just look "not so bad" maybe he'd take a chance. Rebuild her. Make her feel useful again.

He walked around the house, looking her up and down. She hung on to the shutters -- mustn't let them slip. As he stepped onto the porch, she held his weight so as not to break through the boards. He walked into the house and the floorboards creaked. She couldn't help that, but tried to tighten up anyway.

He walked all through the house, scanning, examining, caressing the walls and door frames. The house just knew it was going to be all right. He was interested! He was making plans! She was saved!

Something started ringing -- she knew it was a phone, which was how humans communicated.

"Hey, Chuck. Yeah, I'm here. I think this place is too far gone. I know Jenny wants a place in the country, but I don't want to rebuild from scratch. I just don't have that much money. Besides, this place is really far out. I don't think we need to be quite this far from civilization."

He listened for a moment, then said, "Ok. I'm heading back. See you in a couple of hours."

As the man walked toward the open front door, it slammed shut and locked. Before he reached the door to try it, all the windows slammed shut, glass breaking, and the shutters miraculously straightened up and covered all the openings. The man ran to the back door, but couldn't make it before it, too, slammed and locked.

The man beat his fists on doors, shutters and walls. He ran around the house frantically looking for a way out. It was impossible! Not only being trapped but, with the house in such disrepair, how could it be so strong as to hold him in?

The house was content. Even though the man yelled and screamed, beat her, kicked her and was tearing apart her insides -- she had a human again. He made her feel alive.

No matter what happened from then on, she knew she was fulfilling her duty -- her purpose -- and even if she eventually completely collapsed in on herself, she was happy. She knew this was what she had to do from now on to survive. Nothing was ever the same again after that.