Accessibility links
Jazz Passengers: 'Reunited,' Peaches And Herb-Style The New York band celebrates its reunion by replacing the romantic schlock of Peaches and Herb's "Reunited" with imaginative sarcasm. In the process, its members craft a dark, clanking new arrangement worthy of Harry Partch.

'Reunited' by The Jazz Passengers

'Reunited' by The Jazz Passengers 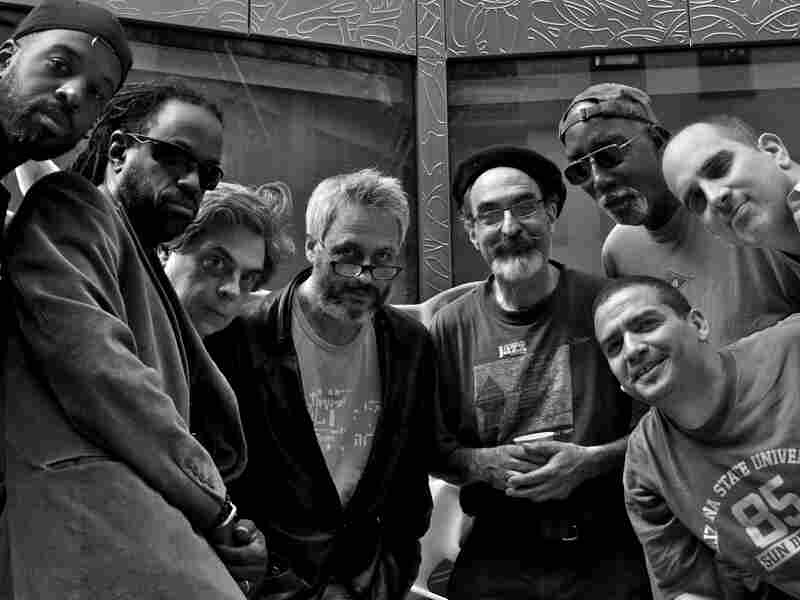 The New York band Jazz Passengers recently got back together, and recorded a familiar cover to mark the occasion. courtesy of DL Media/Justin Time Records hide caption

Jazz has always had satirists, but the members of New York's Jazz Passengers are particularly adept at instilling whimsy into their performances, underscoring it with the sort of musicality that prevents the group from becoming a mere novelty. After a 12-year hiatus, trombonist Curtis Fowlkes and alto saxophonist Roy Nathanson, who co-lead the motley crew, gathered up the remaining members, marking the occasion by recording a wry rendition of Peaches and Herb's 1978 R&B classic "Reunited."

They replace the romantic schlock of the original with imaginative sarcasm by recasting it with a dark, clanking arrangement worthy of Harry Partch. Nathanson intones a daffy confession about love and loss before croaking the song's verse so subversively, it's nearly unrecognizable. Soon, Fowlkes takes over the lead vocals, sounding comparatively smooth while the accompaniment becomes ever more rambunctious. The lead-singer baton is later passed onto vibraphonist Bill Ware and then drummer E.J. Rodriguez before they harmonize together to sing the chorus, making the song momentarily graspable before steering it back into the realm of avant-garde hilarity.