Accessibility links
Christopher Hitchens On Suffering, Beliefs And Dying The outspoken atheist, gleeful provocateur and writer who has skewered everyone from Henry Kissinger to Mother Teresa was diagnosed with cancer of the esophagus in June. He tells NPR's Melissa Block he wishes he was suffering for a "good cause" or something "larger than just mere survival."

Christopher Hitchens -- an outspoken atheist, a gleeful provocateur and writer who has skewered everyone from Bill Clinton to Henry Kissinger to Mother Teresa -- was diagnosed with cancer of the esophagus in June as he was on book tour for his memoir Hitch 22. 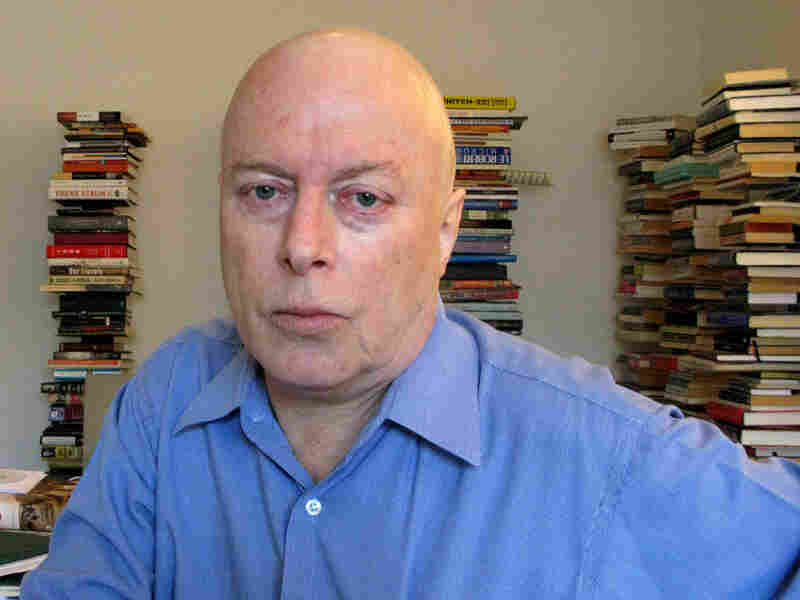 Christopher Hitchens at his home in Washington, D.C. The outspoken atheist and gleeful provocateur was diagnosed with metastasized esophageal cancer in June. He says that the doctors say he has a chance of remission, but his chances of living longer than five years are slim. Brendan Banaszak/NPR hide caption 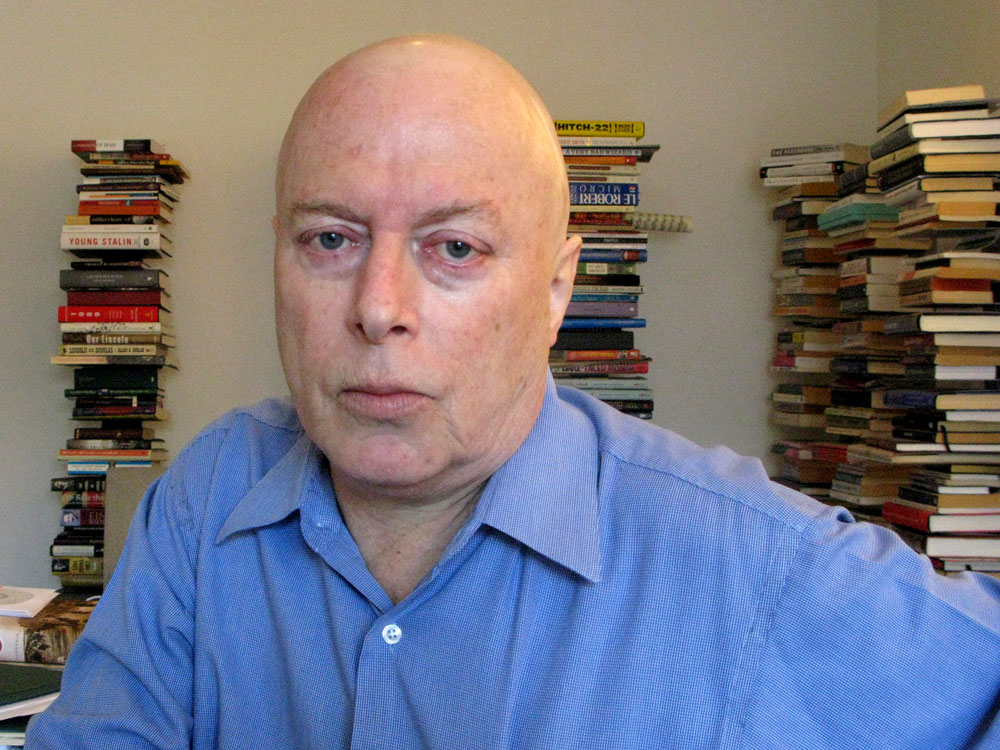 Christopher Hitchens at his home in Washington, D.C. The outspoken atheist and gleeful provocateur was diagnosed with metastasized esophageal cancer in June. He says that the doctors say he has a chance of remission, but his chances of living longer than five years are slim.

The cancer has metastasized, spreading to his lymph nodes. The onetime lion of the intellectual left, a war correspondent known for his sharp wit and legendary for a well-traveled life of boozing and carousing, has been undergoing chemotherapy, which has left him bald, thin and nauseated.

And he's been chronicling all of this in Vanity Fair magazine. It's his journey into what he calls Tumortown.

From his big, airy apartment in Washington, D.C., filled with books including Dr. Sherwin Nuland's book How We Die open on a coffee table, Hitchens tells NPR's Melissa Block about his illness with a sharp sense of limited time. He also uses candor -- and humor.

"When I meet people who say -- which they do all of the time -- 'I must just tell you, my great aunt had cancer of the elbow and the doctors gave her 10 seconds to live, but last I heard she was climbing Mount Everest,' and so forth, I switch off quite early," he says. "If this story is not about metastasized esophageal cancer, I'm not that interested. If you can tell me something about that, I'm passionately interested. All of the cheer-up stories I'm afraid have made me an esophageal cancer snob," he says.

On this recent afternoon, Hitchens said he was not having a terribly good day.

"Chemotherapy isn't good for you," he says. "So when you feel bad, as I am feeling now, you think, 'Well that is a good thing because it's supposed to be poison. If it's making the tumor feel this queasy, then I'm OK with it.' "

So what is a good day for Hitchens?

"A good day is one where I can not just read a book, but write a review of it," he says. "Maybe today I'll be able to do that. I get for some reason somewhat stronger when the sun starts to go down. Dusk is a good time for me. I'm crepuscular."

One of my occasionally silly thoughts is: I wish I was suffering in a good cause — a cause larger than myself. Or, larger than just the mere survival. If you're in pain and being tortured, and you felt it was helping the liberation of humanity, then you can bear it better, I think.

Hitchens says the doctors tell him he has a good chance of buying time -- of "getting a stay" -- but no doctor will tell him they can completely destroy the tumor.

"But I don't blame them. I'm sure if I was a physician I wouldn't do that, even if I thought I could. And I prefer to lowball it myself. Because then the only surprise I can get is a reasonably pleasant one," he says. "But I can just tell you that if you take the absolute aggregate of people who've got what I've got, only 5 percent of us live for five years."

In his writing about the cancer, Hitchens has said he has real problems with his "body as a battleground metaphor." He says to a certain extent he likes a different metaphor: solidarity as resistance. But even that has its pitfalls.

"I feel a certain solidarity with other people who have got it now, of a kind I didn't before. Solidarity is an attitude of resistance, I suppose, or it should be," he says. "But what I feel is that this is making war on me. I'm the one being battled, and it has the advantage -- it's taken the initiative. When I go to the clinic next and sit with a tube in my arm and watch the poison go in, I'm in an attitude of abject passivity. It doesn't feel like fighting at all; it just feels like submitting."

"One of my occasionally silly thoughts is: I wish I was suffering in a good cause -- a cause larger than myself. Or, larger than just the mere survival," he says. "If you're in pain and being tortured, and you felt it was helping the liberation of humanity, then you can bear it better, I think. I just feel this is partly random, and partly the sort of cancer that gets people like me at about this age. It's a part of life. It's a dress rehearsal for an important episode of life, which is how you wind it up and how you agree to face that -- which is something you're aware of even when you're in apparently good health."

In his writings about his diagnosis, Hitchens has asserted: "To the dumb question, why me? The cosmos barely bothers to return the reply: 'Why not.' " Hitchens concedes that the dumb question "is bound to occur" -- but not for long. He says he decided on his beliefs a long time ago, well before he became ill.

"I'm here as a product of process of evolution, which doesn't make very many exceptions. And which rates life relatively cheaply," he says. "I mean, most human beings who've ever been born would have been dead long before they reached my age. And I would think in most of the rest of the world -- well, I know it -- is still true. So to be relatively healthy at 62 is to be dealt a pretty good hand by the cosmos, which doesn't know I'm here -- and won't notice when I'm gone. So that seemed the only properly stoic attitude to take."

I'm here as a product of process of evolution, which doesn't make very many exceptions. And which rates life relatively cheaply.

Since Hitchens got sick, there has been a whole movement of prayer around him, including "Everybody pray for Hitchens day." When asked what he makes of it, he said there are three reasons why people do it "apart from affection for me, which of course I shouldn't be churlish about."

He says his readers are responding and reaching out. And that "has meant quite a deal to me, made me feel I haven't wasted the years I have had," he says. Or, he says, it's a simple wish he gets better, "which again, I don't want to quarrel with." Or, finally, it's a wish that he reconcile himself with the supernatural or divine, something that he calls "a large counterfeit."

"I wrote back to some of the people -- some of them in holy orders who are running registered organizations: 'When you say, "Oh pray for me," do you mind if I ask, "What for?" ' A lot of them said, quite honestly, 'Not really for your recovery, but that you see the error of your ways.' Now I find that not as easy to be graceful about, because though it's put in a nice way, it's part of a phenomenon that I've always thought of as very disgusting, which is the belief of the religious -- which they keep expressing -- that surely now you're dying, your fears will overcome your reason. I hope I don't have to underline what's horrible about that. There's an element of blackmail to it. And an element of tremendous insecurity on their part; I mean they don't seem to feel they'd win the argument so easily with someone who's mentally and physically strong. By the way, I think they're right."

On The Rest Of His Life

"It does gash me to think that people like that would outlive me, I have to say," he says. "It really does."

And he mentions other things he'd like to live to see: the end of the Kim Jong Il regime in North Korea, Osama bin Laden on trial, the World Trade Center rebuilt. Hitchens measures his own time, against the world.