Accessibility links
Before Stewart's 'Sanity' Rally, A Great Debate The Daily Show host says he has become less political over time. But some pundits say Stewart's rally in Washington on Saturday has become a political event as liberal groups have latched on to it.

On Our Monkey See Blog: Live Reports From The Rally

Blogger Linda Holmes sends us dispatches from the front lines of fear and sanity.

When Jon Stewart announced his Washington, D.C., Rally to Restore Sanity, he inspired much joy among fans of his Daily Show.

But he has also sparked a fierce debate among pundits over whether Stewart really has comedy or politics in mind for the event. It is scheduled for Saturday afternoon on the National Mall.

"I have had the growing suspicion that the participants in this rally don't entirely think of it as a comedy show," Timothy Noah of the online magazine Slate says. "I think that they are mistaking ... participation in this rally for some sort of political statement. That confusion troubles me."

Liberal groups are unabashedly latching on to the event. One of the left's most popular blogs, The Huffington Post, is sending people there on more than 200 buses, and the Democratic Party is seeking to sign up volunteers for last-minute get-out-the-vote efforts for next Tuesday's elections.

"People who have vocalized that they're going to be heading to the rally are generally progressive," says Lynda Tran, a spokeswoman for the Democratic Party's Organizing for America project. "There are going to be a lot of young people who are out there who have certainly had a strong relationship with the president."

For his part, Stewart and his team have been tight-lipped about what's to come. On WHYY's Fresh Air earlier this month, Stewart said his show is not particularly political: "I don't consider it as political, because political I always denote as a partisan endeavor." 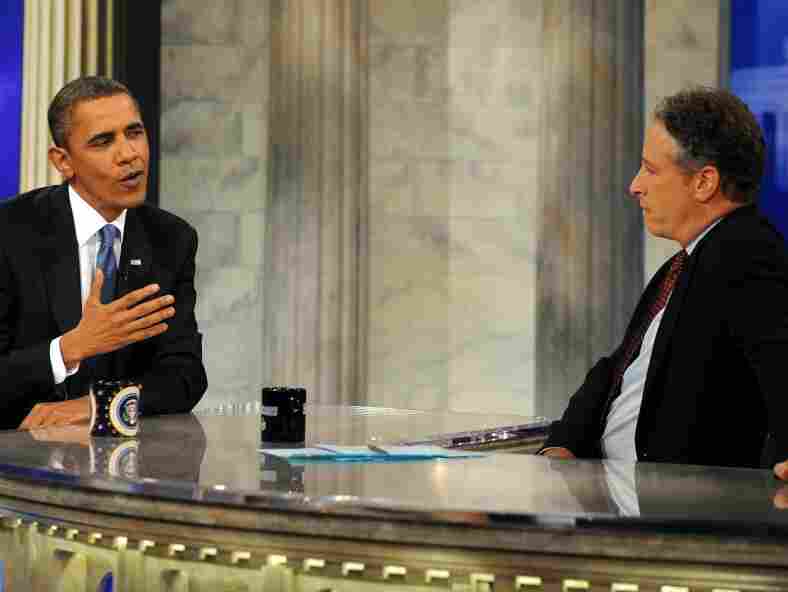 This week, in the run-up to Saturday's rally, The Daily Show with Jon Stewart has been taping its shows in Washington. President Obama was among the guests. Pool/Getty Images hide caption

Inspired By, Not Mocking, Glenn Beck?

The conservative Fox News host Glenn Beck's August "Restoring Honor" rally at the Lincoln Memorial was an inspiration for Stewart’s event. Beck has long been a favorite target of Stewart and his Comedy Central collaborator, Stephen Colbert. Colbert is staging a concurrent March to Restore Fear on Saturday -- presumably in character as a right-wing and often ill-informed blowhard.

Stewart typically -- though not exclusively -- has a liberal take on such major issues as the invasion of Iraq and the regulation of Wall Street. But Stewart says he is not setting out to mock Beck or the passion of the Tea Party activists who helped fuel the Fox broadcaster's emotional rally.

"We saw that and thought, what a beautiful outline," Stewart said on Fresh Air. "What a beautiful structure to fill with what we want to express in live form, festival form."

On 'Morning Edition': 'Democrats Hope To Benefit From Stewart's Rally'

Stewart said he's making fun of the intensity of most political rhetoric right now. He told Fresh Air's Terry Gross that he rejects "the whole idea that we're in a ... battle ... between tyranny and freedom."

"It's a series of pendulum swings," Stewart said, "and the swings have become less drastic over time."

Some fans are taking Stewart at his word.

"The message is that we need to take it down a notch," says Keira Havens, a 27-year-old genetics researcher doing work at Colorado State University. "The hyperbole and the name-calling, and the inability to have a discussion without resorting to either of those tactics, is really undermining the way that politics gets done in America."

She saw some online chatter and arranged for a viewing party to be held at Civic Center Park in downtown Denver. Some 2,900 people have already signed up on Facebook to attend and watch on massive screens. There are many such satellite events scheduled around the country.

But Noah of Slate argues that Stewart is likely to regret the whole thing. "You know, humor has its place and politics has its place, but don't try and turn the process itself into a put-on," Noah says. "This is a serious business."

Liberal political groups aren't shying away, however. Public Citizen, the consumer advocacy group, held a contest to choose the slogans that should be written on the 5,000 signs it intends to distribute at the event.

"When Jon Stewart and Stephen Colbert called this rally on the Mall, you know, it presented a unique opportunity -- because the demographic of their audience is one that aligns well with our issues," says Jeremy Pittman, the deputy field director for the Human Rights Campaign, a gay-advocacy group.

The group intends to invite out-of-town members to visit its headquarters in Washington, to recruit new members, and to draw volunteers for phone banks to make calls for favored candidates in tight races next week.

"It sort of raises the philosophical question: What is it that is going to define the rally the morning after?" asks James Poniewozik, a senior writer on popular culture for Time magazine. "Is it what is said from the stage? Or the groups of people that show up, and the signs they carry, and their political leanings?"

He rejects the idea that Stewart, even in staging a mock rally, is trivializing politics. "That's sort of a simple-minded view that I think misses the point of satire," Poniewozik says. "Satire is entertainment that comes with a point."

In fact, Poniewozik argues that Stewart and Colbert can have it both ways. And Poniewozik says that's nothing new. "Stewart, you know, has said for years that when he took over The Daily Show from Craig Kilborn, he made the concerted decision that it was going to be humor about something," Poniewozik says. "I think his phrase was, he was going to move the show toward relevance."

Poniewozik thinks the rally will be like the show on a grander scale. But as he also says, no one knows for sure.

In that Fresh Air interview, Gross asked Stewart whether doing the show made him more political. On the contrary, he replied. "The closer you spend time with the political and the media process, the less political you become, and the more viscerally upset you become at corruption," Stewart said. "I'm less upset about politicians than the media."

So four nights a week on Comedy Central, Stewart and Colbert eviscerate the media for failing to call foul on those politicians. Why would the two comedians choose any different targets for their rally on the Mall?