Accessibility links
Insurance Commissioners Loom Large In Health Law Voters don't give much thought to who runs their state department of insurance. And in many places no one can name the person holding this office. But as key provisions of the new federal health law begin to take effect, insurance commissioners will become paramount. 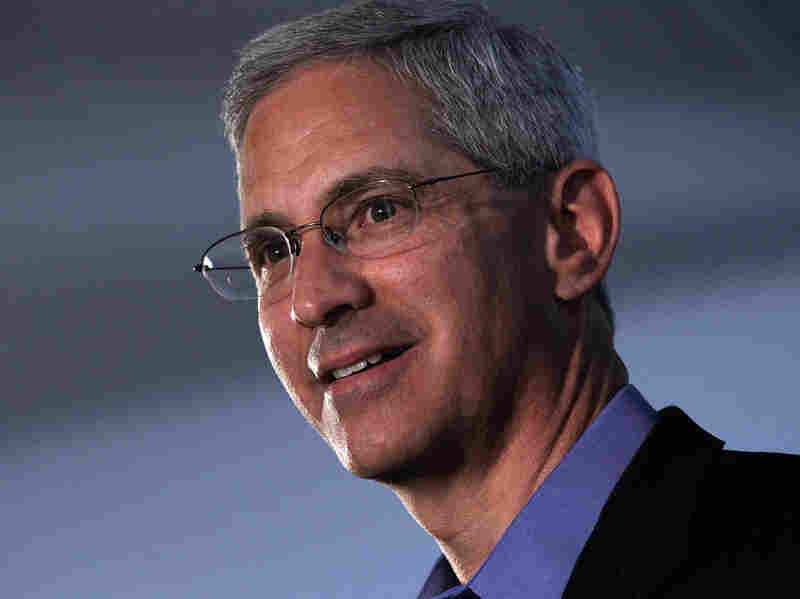 Voters don't give much thought to who runs their state department of insurance. But as key provisions of the new federal health law begin to take effect, the insurance commissioner will become the king of a much bigger kingdom.

Voters in four states, including Georgia and California, will directly elect an insurance chief on Tuesday. And in nearly three dozen other states, whoever is elected governor will name the commissioner.

Fame does not come easy to even the most heroic insurance commissioner. California's current chief forced health plans to scale back double-digit rate hikes, and still he's the white knight no one can name.

Steve Poizner is the California insurance commissioner, and whoever replaces him -- and other insurance chiefs around the nation -- could change your life.

"With the insurance market reforms, it's really going to be important for states to take a proactive role in responding to any problems that come up and making sure plans are complying with the law," says Sabrina Corlette, a health policy researcher at Georgetown University.

She says that under the federal health law, state insurance chiefs will have a long list of new consumer protections to enforce. For example, starting in 2014, health plans can't charge women or sicker people more.

They're also helping to write the regulations for their own expanded powers. Congress left it up to an obscure group -- the National Association of Insurance Commissioners -- to essentially decide critical details, such as what health plans can claim as actual medical care vs. administration and profit.

Corlette says this decision made these humble regulators very popular with industry lobbyists at their spring meeting.

"I was stunned to discover that there were about 17 consumer representatives that were focused on health care, compared to over 1,000 different insurance industry representatives," she says.

Consumer advocates and industry officials say once the rules are written, state regulators will have to crack down on health plans looking to exploit fuzzy rules or weak enforcement. At the same time, if they're too heavy-handed, the plans might leave the market.

All of which means state insurance chiefs could very well play a key role in whether the federal health overhaul flies or flops. Laurie Sobel, a senior attorney with the consumer advocacy group Consumers Union, says it matters how the insurance commissioners view the new federal health law.

"If you have one that really doesn't want to enforce it, then consumers are going to need to fight it every step of the way," Sobel says.

The two candidates vying to become California's chief regulator have starkly different views on how best to protect consumers. Assemblyman Mike Villines, the Republican in the race, is a skeptic about whether the government can fix a system he admits is broken.

"When you start to get into mandating behavior and you have to tell the insurance companies there are these for-sure things in here that you have to do -- I think that Californians and the nation is not quite ready for that," Villines says.

"I plan to use the office both formally and informally, to take a very assertive role in terms of health insurance reform," Jones says.

Overseeing the national rule-writing effort is Kansas Insurance Commissioner Sandy Praeger. She's up for re-election -- a Republican in a solidly red state and running unopposed. With no challenger, she's instead spending her time worrying about all the details her group must decide.

"I don't want to get thrown under the bus," Praeger says. "We don't want to be blamed if this isn't working. So we've got a huge responsibility to try to get it right.

But many Republican candidates for governor think the law is just wrong. And in some states, those candidates -- who could end up appointing new insurance chiefs -- want to repeal the federal health overhaul.

With Democrats on the ropes nationwide, that could be bad news for reformers.