Accessibility links
The Magic Of Harry Houdini's Staying Power Harry Houdini was known for escaping from handcuffs, straitjackets and water tanks, but his greatest trick was escaping from the dustbin of history. A new exhibit at the Jewish Museum in New York asks how Houdini's fame managed to survive. 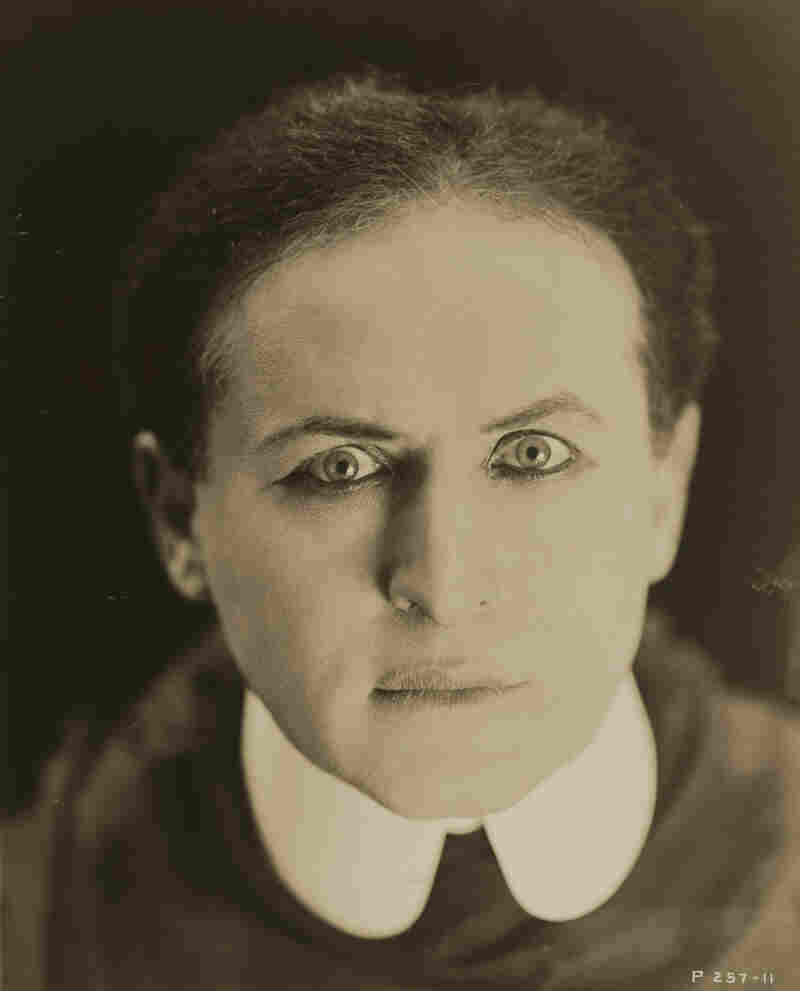 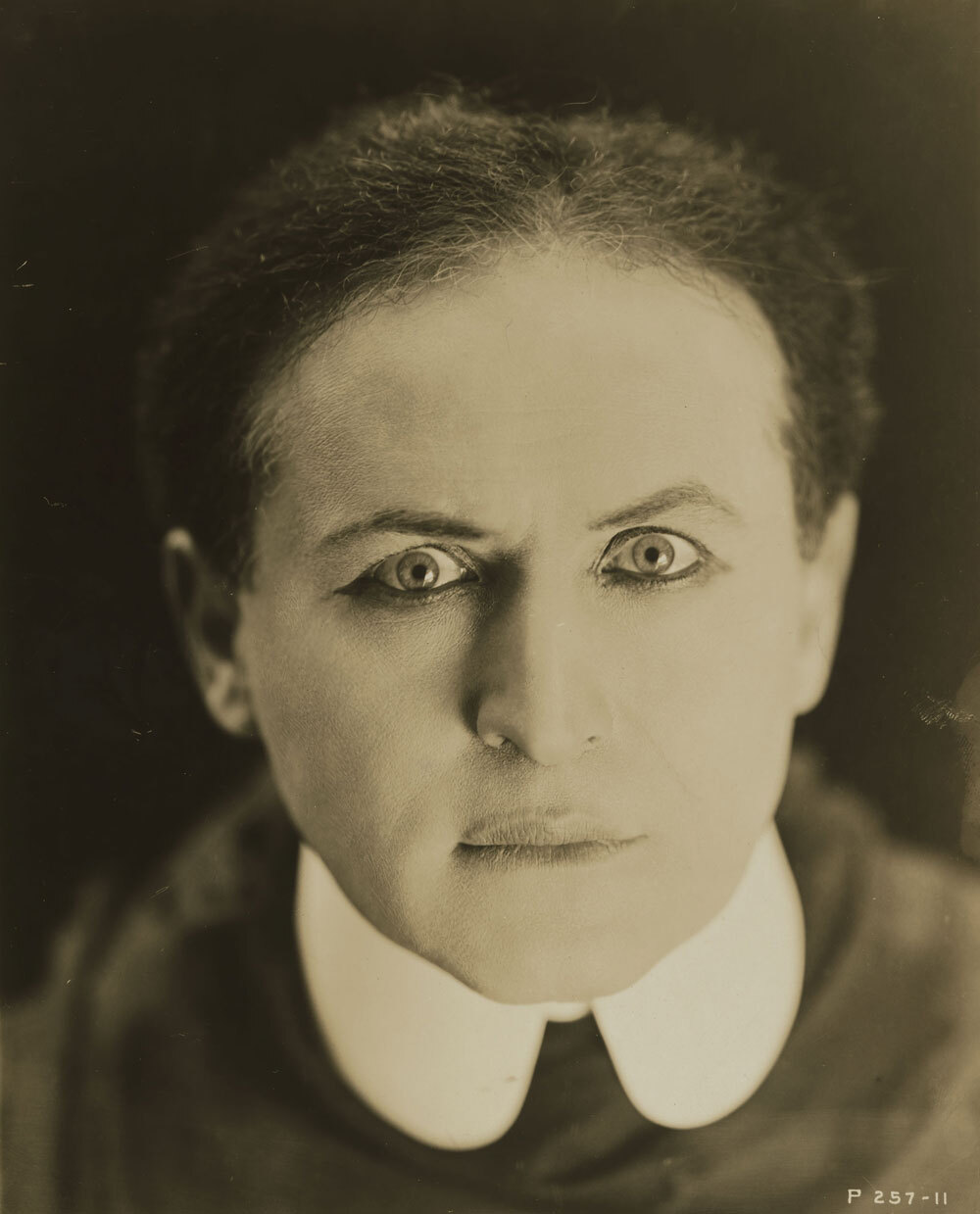 Harry Houdini was known for escaping from handcuffs, straitjackets and water tanks, but his greatest trick was escaping from the dustbin of history. After all, how many popular performers can you name from 1902? Yet more than 80 years after his death, Houdini is still referred to as the greatest magician who ever lived.

A new exhibit at the Jewish Museum in New York, called Houdini: Arts and Magic, looks at the visual legacy of Harry Houdini and how his fame managed to survive.

The answer to that question, at least in part, lies in the nature of Houdini's legend, which was so simple that kids are still passing it around the playground. There once was a man who could escape from anything …

"He is the perfect teen idol," says Teller, one half of the comic-magic duo Penn and Teller. Teller says each generation, from Houdini's to today's, has discovered that there's something elemental about the great magician.

"[He] is this physical and mental superguy; this ultracool James Bond guy that you can strip stark naked and throw into a jail cell and he can get out," he says. "If you are a teenager, you want self-liberation above all, and there's Houdini as the perfect shining example of the all-American self-liberator."

But going from a man to a legend wasn't easy at the end of the 19th century. Houdini didn't have TV or radio to spread his name, and the wax cylinder had its limits. Instead, Houdini had to build his fame town by town, escape by escape.

Brooke Kamin Rapaport, curator of the Jewish Museum's exhibit, points to an archival silent film from 1907 of a bridge jump Houdini did while handcuffed. In the film, Houdini gets stripped down, then chained up by the police. Crowds stand by as he dives over the bridge and into a river. Then, they all wait for him to resurface. 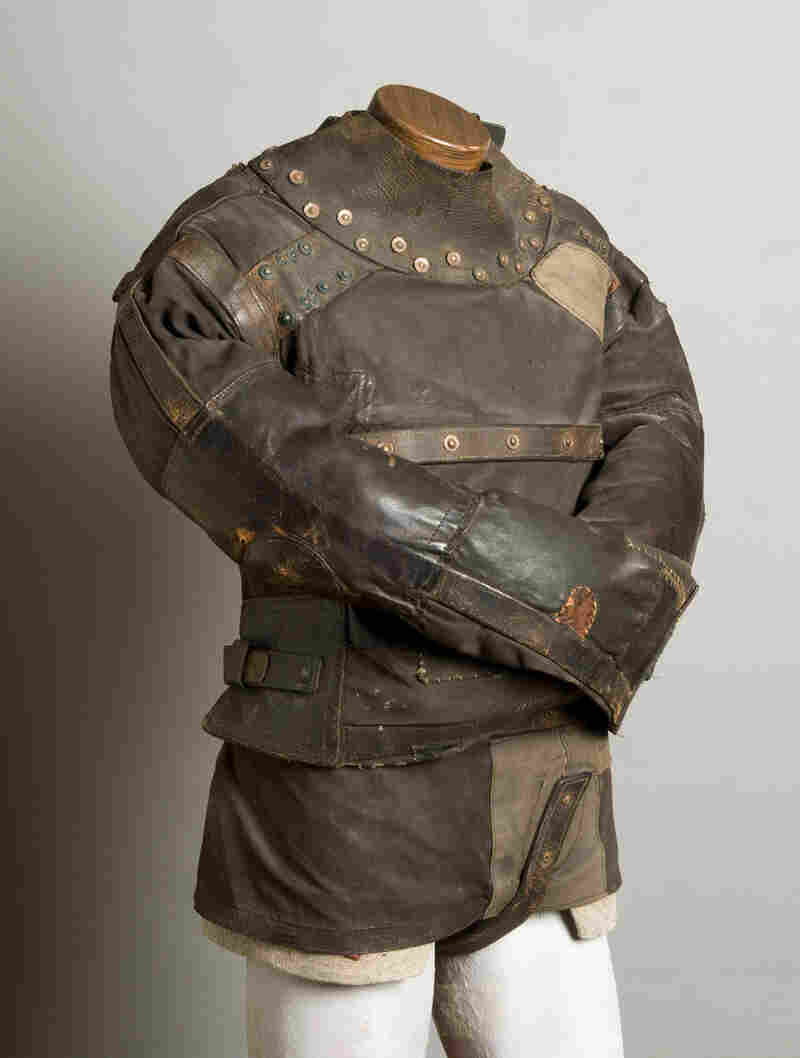 Houdini first thought of using straitjackets, like this one, in his acts after visiting a mental hospital in Canada. Robert LaPrelle/Collection of Arthur Moses hide caption 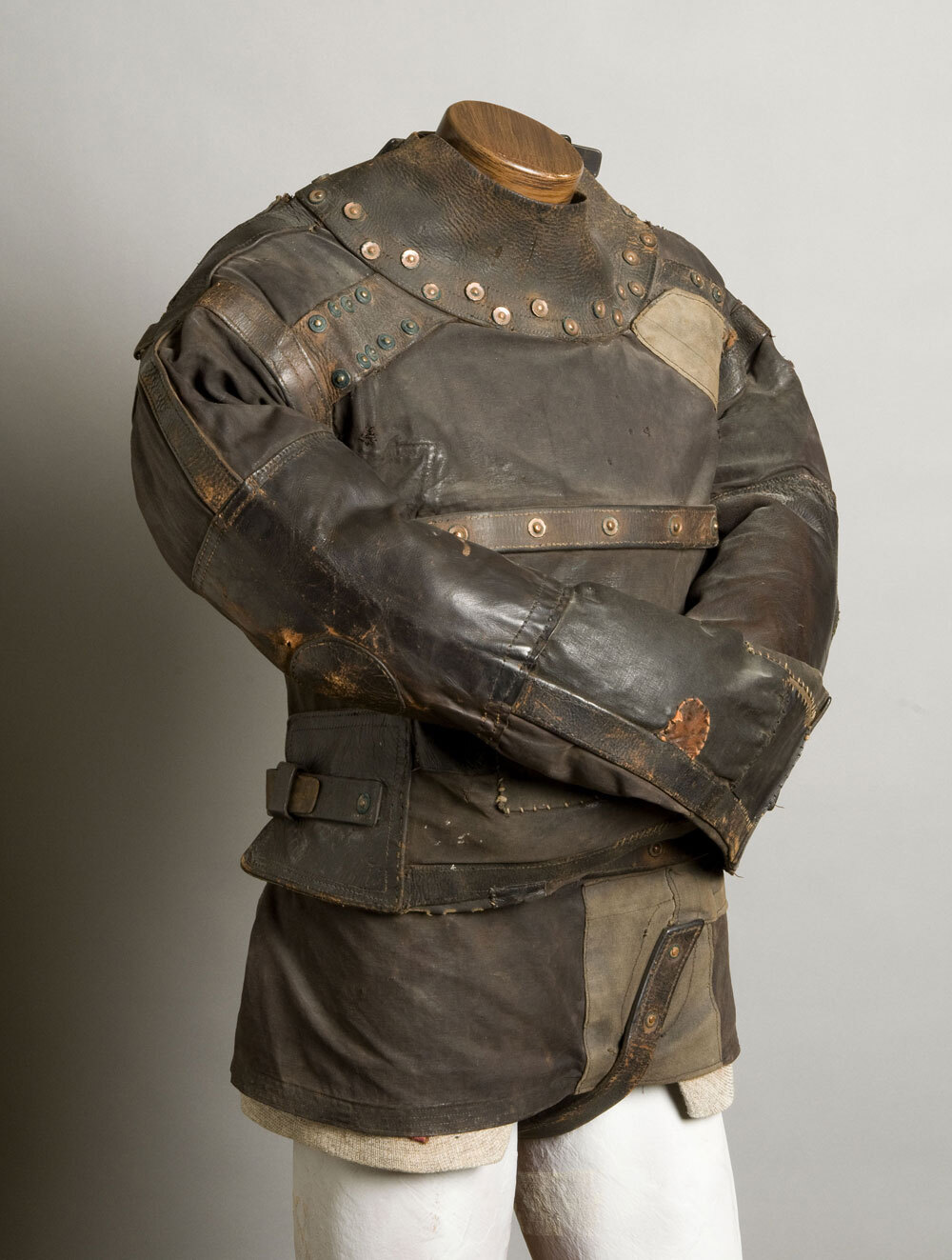 Houdini first thought of using straitjackets, like this one, in his acts after visiting a mental hospital in Canada.

"He comes up with the handcuffs brandished in the air," Rapaport says. "There's a great storyline and it's absolutely cinematic."

The museum's collection is full of Houdini art and artifacts that demonstrate his knack for creating iconic visuals and manipulating the media of his time.

Houdini's diaries are full of newspaper clippings of his stunts -- both media and magical.

The clips show him visiting big cities and hanging himself upside down in a straitjacket from buildings -- but not just any buildings. He chose buildings that housed major newspapers, hanging off The Houston Chronicle or The Boston Globe so photographers could just pop their heads out the windows to shoot him.

"He would not only make front-page headlines," Rapaport says, "he would also sell out his evening performances."

He used other stunts like escaping from milk cans, mailbags or steamer trunks as an opportunity for cross promotion.

Years before the science of public relations was perfected, Houdini was doing it all: branding, viral marketing, media strategy, product placement and even new media -- although in the early 1900s, that meant posters. 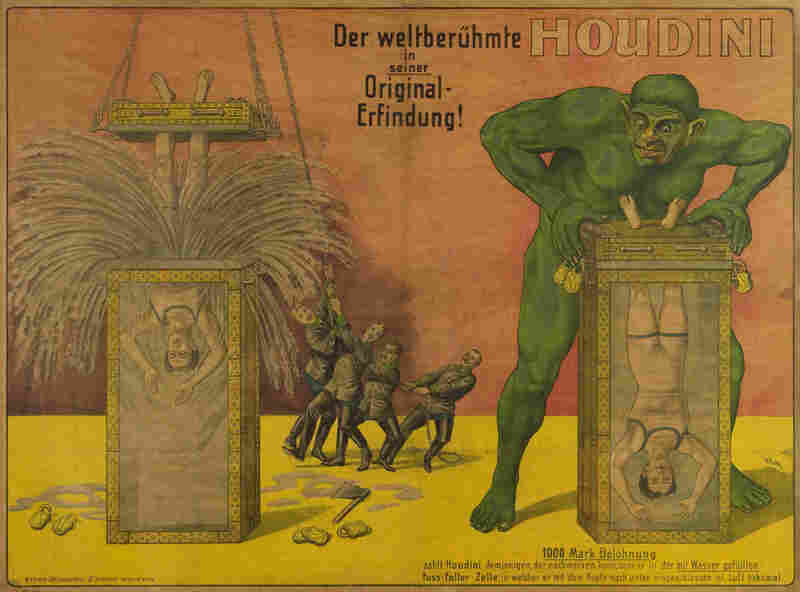 Houdini used posters that carried themes of freedom from oppression to promote his acts throughout the world. Courtesy of Fantasma Magic Shop hide caption 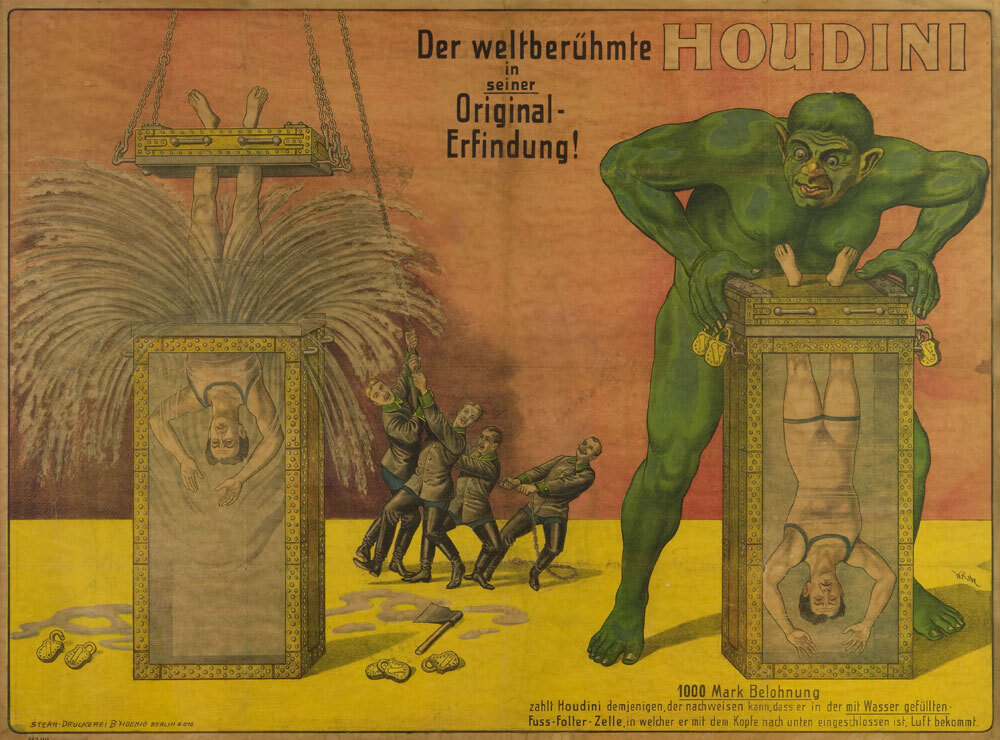 Houdini used posters that carried themes of freedom from oppression to promote his acts throughout the world.

The Houdini exhibit features posters from every stage of his career, each one more and more dramatic: Houdini surrounded by the forces of evil; Houdini being handcuffed by a menacing policeman; Houdini being choked by a robot; Houdini being held underwater by a giant, green monster.

Rapaport says people at the time would have seen the subtext of a Jewish immigrant from Budapest, the son of a rabbi, struggling to get free. "These feats were stunts [but] they were also imbued with [the] great symbolism of escape from political and social and religious oppression," Rapaport says. "The narrative is so clear it could not have been missed in his day."

Houdini was so aware of his effect on the viewer that he very likely left nothing to chance -- not even his memorial.

Houdini died of peritonitis on Halloween in 1926 after being punched in the stomach -- though movies would later have him drown in the water torture device. Before he died, he left his wife with some last wishes -- instructions for a final publicity stunt to be carried out from beyond the grave.

He asked her to hold a seance on the anniversary of his death, and, like so much of Houdini's life, that tradition has been remembered.

More than 80 years later, his fans still gather every Halloween to carry out his wishes, and carry on his fame.