Accessibility links
'Sanity/Fear' Rally A Protest Of The Absurd Tens of thousands of people got together Saturday on the National Mall with comedians Stephen Colbert and Jon Stewart. The Rally to Restore Sanity and/or Fear was mostly a good-natured riot -- a laugh riot, that is. 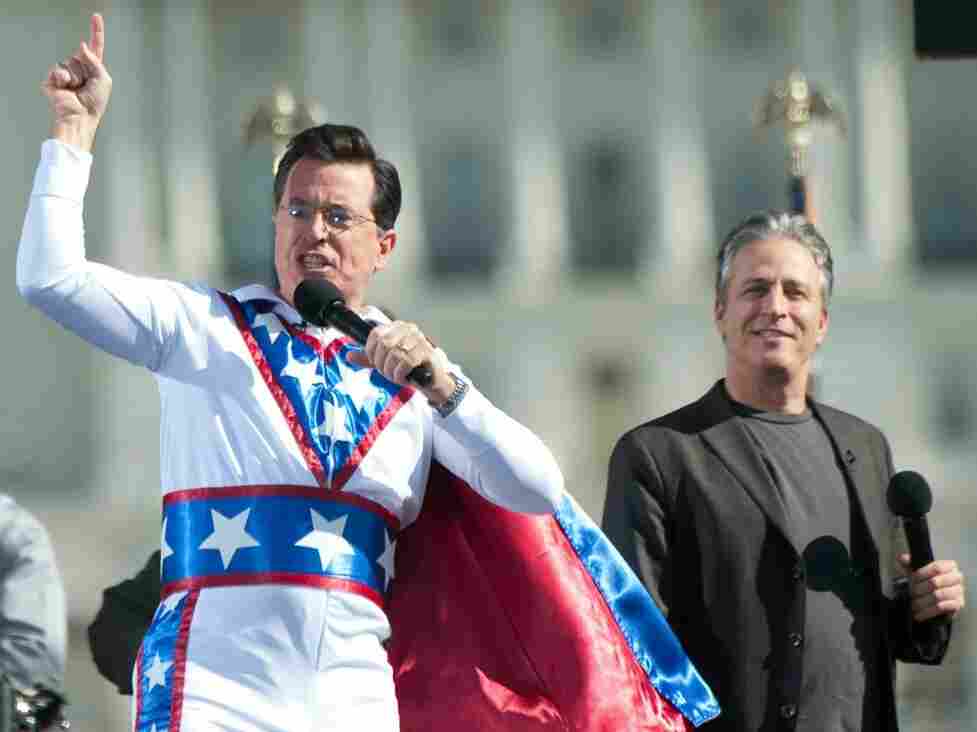 Jon Stewart and Stephen Colbert address thousands gathered for The Rally to Restore Sanity and/or Fear on the National Mall in Washington on Saturday. Saul Loeb/AFP/Getty Images hide caption

Tens of thousands of people got together on the National Mall in Washington on Saturday with comedians Stephen Colbert and Jon Stewart. The Rally to Restore Sanity and/or Fear was mostly a good-natured riot -- a laugh riot, that is.

The first sign that this was not going to be a normal political rally was when two stars on the Discovery Channel, Mythbusters Jamie Hyneman and Adam Savage, climbed the stage.

They had two seismologists with a seismograph set up off-stage to record the impact of the entire crowd jumping. All at once.

The crowd packed the mall from the U.S. Capitol to the Washington Monument; 16 blocks of people anxious to see their political guru Stewart and his supposed conservative nemesis, Colbert. Stewart had to block Colbert from trying to get the crowd to kneel before him.

"There's no bowing, no kneeling -- these are reasonable people," Stewart protested.

"They're reasonable now, Jon, but soon they'll be a mindless panicked mob, once I release the bees," Colbert retorted.

Signs We Saw At The Rally

And so on. It was more of a spoof of a rally than a rally itself. And the audience played right along. Signs said things like:

--"Fight the Power, after lunch"

--"There's nothing to fear but fear itself, and spiders"

Jen Malek of St. Louis carried a sign that read "Hyperbole is destroying America." The point? "Trying to bring adult conversation back into our nation's governance," she said. "Instead of 'You suck.' 'No, you suck more.' 'You're evil.' 'No, you're evil.' "

"The absurdity of the rhetoric has just gotten out of line," said Chuck Yormy, who drove down from Newark, Del.

"Screaming about death panels, screaming that they're going to take $500 billion out of Medicare," Yormy said. "To be screaming like you're a bunch of kindergarten children having tantrums is ridiculous."

Monkey See: Highs And Lows From The Rally

It wasn't until the very end of the so-called Rally to Restore Sanity that Stewart got a little serious.

"Now, I thought we might have a moment, however brief, for some sincerity," he told the crowd. "I know there are boundaries for a comedian pundit talker guy -- and I'm sure I'll find out tomorrow how I have violated them."

Stewart went on to lay the blame for all the bickering, hostility and hyperbole in politics these days on the media -- in part, at least.

"The press can hold its magnifying glass up to our problems, bringing them into focus, illuminating issues heretofore unseen," he said. "Or they can use that magnifying glass to light ants on fire. And then, perhaps host a week of shows on the sudden, unexpected, dangerous ant-fire epidemic."

He seemed pleased and surprised by the number of people who showed up -- for an event that was more a protest of politics than a political protest.

"I'm really happy you're here," he told the audience, "even if none of us are quite sure why we are here."