Accessibility links
Nobel Economic Recipe: Help States, Add Stimulus Economist Peter Diamond, freshly minted Nobel Prize winner, says the only way to break the unemployment logjam is another round of short-term spending and a big injection of federal money to save jobs in state and local governments. 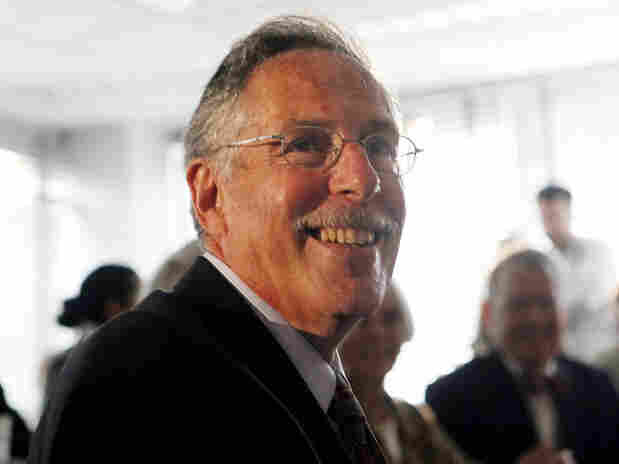 It's been more than a year since the recession officially ended. The U.S. economy is growing -- albeit slowly -- but high unemployment rates just won't budge. Traditional economic remedies, such as cutting interest rates, aren't making a dent.

Peter Diamond has some ideas on how to break that logjam: a second round of stimulus, and a lot of federal money to keep state and local governments from laying off workers.

And Diamond's got the credentials: Earlier this month, he was one of three co-winners of the Nobel Prize for Economics.

Diamond tells NPR's Guy Raz it's not going to be a quick fix, though.

"Getting unemployment down to a more normal level is going to take a long time, as in at least a couple of years," he says.

The big problem: Not enough businesses are willing to expand and hire workers.

"What's critical is not right now the functioning of the labor market, but the limits on the demand for labor coming from the great caution on the side of both consumers and firms because of the great uncertainty of what's going to happen next."

The first part of Diamond's prescription is another jolt of federal help for state and local governments to keep their workers -- especially police and teachers -- employed.

"The layoffs from state and local government are first of all bad in and of themselves because a lot of what these people do is so valuable. But secondly, when [these people] become unemployed, they spend less and that cuts down the demand."

And Diamond thinks Washington needs to administer another dose of short-term spending, in areas such as construction.

"We've identified a vast amount of need in roads and bridges and tunnels, and we should be pursuing valuable expenditures now at a time when the cost to the economy, the cost to society is a lot less, because a lot of the workers being employed aren't being drawn away from private projects."

Diamond says investing in public works projects is worth the risk of increasing the deficit.

But Are Politicians Listening?

Diamond isn't the only economist calling for more short-term stimulus. In fact, almost every economist Weekend All Things Considered has talked to in the past few weeks echoes that sentiment. But finding common ground with the politicians in Washington and the people on Main Street is another story.

"The first stimulus bill, by all quantitative estimates, produced a huge amount of additional employment," Diamond says. "But that stimulus bill has been extremely unpopular with the American public, even though in the eyes of economists it was a great success."

But that's a tough political sell.

Still, Diamond says: "There's so much uncertainty now between the error of doing too little and doing to much. Doing too little seems to me to be much greater risk."