Accessibility links
8 Things Everyone Needs To Know About Zombies Zombies, it seems, are everywhere these days, so we've hauled in an expert to prepare us for the invasion. 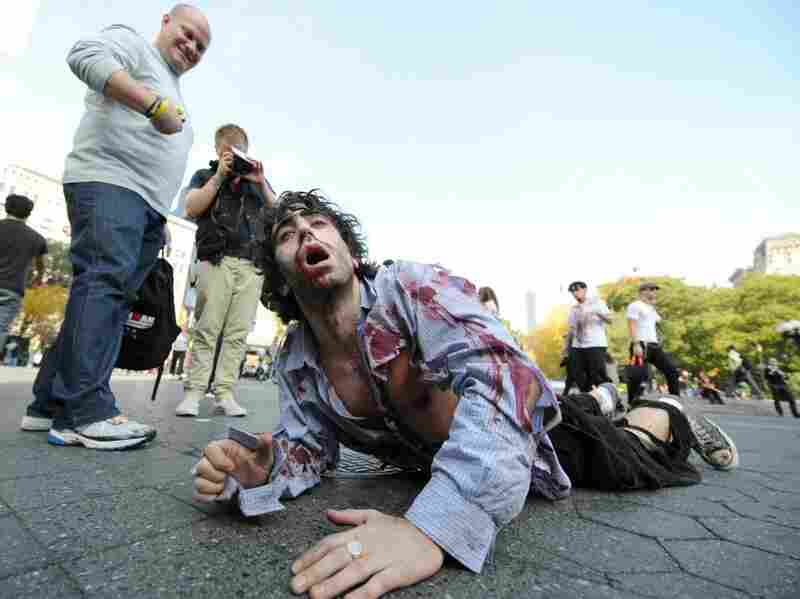 Zombies, it seems, are everywhere these days -- in popular books like Pride and Prejudice and Zombies and World War Z, and in the new AMC show The Walking Dead, which had the New York Times declaring that "zombies are making a comeback."

George Mason University anthropology professor Jeffrey Mantz teaches a class on zombies and their cultural importance. We asked him to prepare us for the invasion with this list of things everyone should know about zombies.

1. They Are Everywhere
Across many cultures around the world, there is a concern that the dead could return to walk among the living. Sometimes these ghouls are merely tricksters who are having fun at our expense; other times they are vengeful creatures who were treated poorly in life and are exacting revenge. Perhaps it's a mother who died in childbirth. But there are very few places in the world where you won't find them.

2. Most Will Eat You If You Get Too Close
These days, zombies are basically understood to be ghouls who consume the living. In fact, a large proportion of those who study zombies argue that they are basically a metaphor for consumption. George Romero's Dawn of the Dead famously suggested this, showing zombies wandering through a mall in a strangely similar way to when they were humans. So if zombies represent how we are when we are at our worst (say, the morning after Thanksgiving outside an electronics store that is practically giving flat-screen televisions away), we should be very afraid.

3. Zombies Don't Always Attack The Living
In some cultures, including much of the African and Caribbean traditions from which the word "zombie" originated, zombies are more mindless servants that do the (more often bad, but sometimes quite neutral) bidding of a zombie keeper who has possessed them. In such cases, zombies tend to represent particular kinds of slave or labor relationships.

4. A Zombie Attack Is Probably The Worst Thing That Can Happen To You
The reason zombies are so terrifying to us is because they represent one of our greatest fears: a loss of our autonomy, our ability to control our bodies and minds. It is fitting that these monsters have been largely represented as rotting corpses, because that's literally what they do to human beings: They decompose us individually and assimilate us into a giant, undifferentiated horde, just like the Borg in Star Trek (which essentially was one, roving, intergalactic zombie).

5. Of All The Undead Things You Could Become, Zombies Are The Worst
As opposed to vampires, which are often represented as seductive, youthful superhuman creatures (or more recently as overly emotive teenagers), zombies are almost always cursed with an irreversible, less-than-attractive subhumanity in the single-minded pursuit of some task or thing (such as flesh or brains). With only a few imaginative exceptions, zombies cannot love, laugh or live freely.

6. They Have Become Fast -- Because Our World Is Fast
Zombies, like LOLcats videos, have gone viral; and when things go viral, they move fast. As the themes of zombie films have shifted from Cold War worries about the slow chemical effects of radiological exposure (the source of zombie outbreaks in films like Night of the Living Dead) to terrorism-era fears about rapid bacteriological exposure (for example, in 28 Days Later or Resident Evil), the zombies have similarly accelerated. The more rapid our lives, communications, transportation and technology, the more quickly threats to them are experienced.

7. Oh, Yes, Zombies Are Real
Scientists have discovered and manufactured bacteria, viruses and parasites that have zombie-inducing qualities. And stem cell and nanotechnology research offer real possibilities for the reanimation of tissue. There is also significant debate as to whether zombie neurotoxins exist; there is a whole branch of pharmacology devoted to determining whether such compounds can be found in nature.

8. You May Have Already Been Bitten
The digital age is beginning to fundamentally change the ways in which human beings interact with each other. Immersion into our smart phones and our second lives in virtual worlds offer novel and exciting experiences, but also erode the lived, bodily dimensions of our humanity. The impact of technology on society is hardly new, but it certainly has accelerated in the past 20 years. So given the recent explosion of the undead in popular culture, one should wonder whether all of this might be suggesting an imminent zombie apocalypse? Or, perhaps, we are already in the thick of it.