Accessibility links
The Root: The N-Word Is Just As Bad In French Many words lose their meanings in translation, but what about racial slurs? Jake Lamar of The Root argues that although many French speakers use negre (the translation of the n-word) colloquially to mean "ghost-writer," it is still racially charged, and should be used with caution or not at all.

The Root: The N-Word Is Just As Bad In French

The Root: The N-Word Is Just As Bad In French 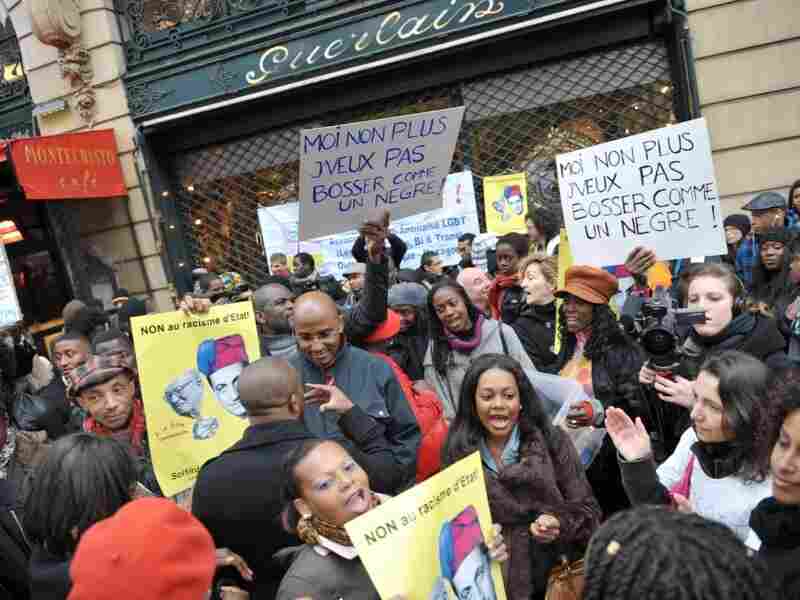 A demonstration in Paris protesting the perfume maker Jean-Paul Guerlain. Guerlain made news recently by telling an interviewer he had 'worked like a negro' on the brand's new perfume. Bertrand Langlois/AFP/Getty Images hide caption

The word negre is being bandied about in the French media in an unusually intense way these days, thanks to the blatherings of the cosmetics tycoon Jean-Paul Guerlain, who said on French television recently that he had "worked like a negre" to develop the perfume Samsara. When the newscaster Audrey Pulvar, born in Martinique, called outraged attention to Guerlain's use of that dusty old turn of phrase, it sparked the sort of racial protest that is unusual in France. Last Saturday, anti-racism activists protested in front of the Guerlain boutique on the Champs-Elysees, effectively shutting down the shop. They have urged a boycott of Guerlain products.

Does the French word negre translate directly to the epithet Americans refer to as the n-word? The most accurate answer would be "Yes, but ... " One could say that negre is demeaning and caste conscious in the same way that "colored" might sound to the 21st-century American ear. But if you're talking about a blast of pure racial hatred, the true equivalent of "n- - - - - " in French, the unutterable insult is actually "negro."

This linguistic difference can lead to some curious misunderstandings. I've met French admirers of American literature who are shocked when reading works from, say, the 1950s, to see writers referring to black people as "Negroes." I have to explain that this was, in fact, the politically correct term of its day, not the ultimate pejorative.

Over the years, I've met quite a few French writers, all of them white, who have referred to themselves as negres. A journalist might mention the autobiography of a French celebrity and whisper, "I was her negre." Or a struggling novelist might say, "I hated being a negre. But I needed the money." I wince every time I hear the word. And I always have to remind myself that, in French publishing circles, it's only the term for what English speakers call a "ghost writer."

The French started calling ghost writers negres back in the 1700s, just as colonialism and the slave trade were gaining momentum. The idea was that writing under someone else's name, erasing your own identity, was thankless servitude on a par with the labor of colonialism's black subjects and victims. The important difference was that the chains of the negre litteraire were not made of iron. "The French are schizophrenic about that term," a French literature professor tells me. "They call ghost writers negres, but in any other context, they would consider the word negre racist."

A schizophrenic case in point: Roman Polanski's most recent film was released in France under its English title, The Ghost Writer. It must have been decided that putting Le Negre on posters and marquees might be offensive. But you can click on the trailer for the film dubbed in French and hear Ewan McGregor, the title character, say to Pierce Brosnan, "Je suis votre negre." (Or, if you like: "I am your n- - - - -.")

I've asked French writers and editors, "Why not change the expression to a direct translation of the English term 'ghost writer': ecrivain fantome?" I usually get a blank stare and a response along the lines of, "Never thought of that. Maybe it could work."

It's the most loaded words that are the most dangerous to bungle in translation. A few years ago, I met a perky young Frenchwoman who had just returned from a year of studying in Los Angeles. She'd grown up in Paris loving American rap music, absorbing images of hip-hop culture on television and the Internet. Her first day in L.A., she was walking through a mall when she saw a black guy in a baseball cap turned backward, high-tops and baggy pants. As they approached each other, they made eye contact. The young Frenchwoman waved and said, "Hey, nigga."

Perhaps the young man detected the foreign accent and decided to take pity on the visiting student. He politely explained to the Frenchwoman that there are certain words she just should not use.