Accessibility links
Movie Review - '127 Hours' - A Moment Of Shock, And Then A Grim Few Days Based on a true story, 127 Hours — the latest film from Slumdog Millionaire director Danny Boyle — features James Franco as Aron Ralston, a daring but reckless hiker who becomes trapped under a rock in an isolated canyon. 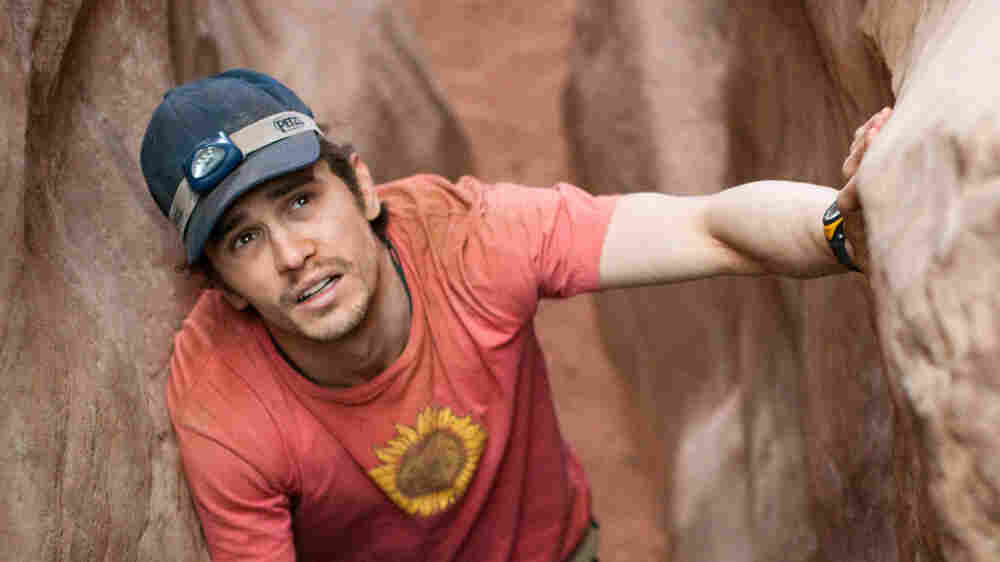 Life or Death: James Franco stars as Aron Ralston, a hiker who spends days trapped by a fallen rock in Utah — having told no one where he was going. Chuck Zlotnick/Fox Searchlight Pictures hide caption 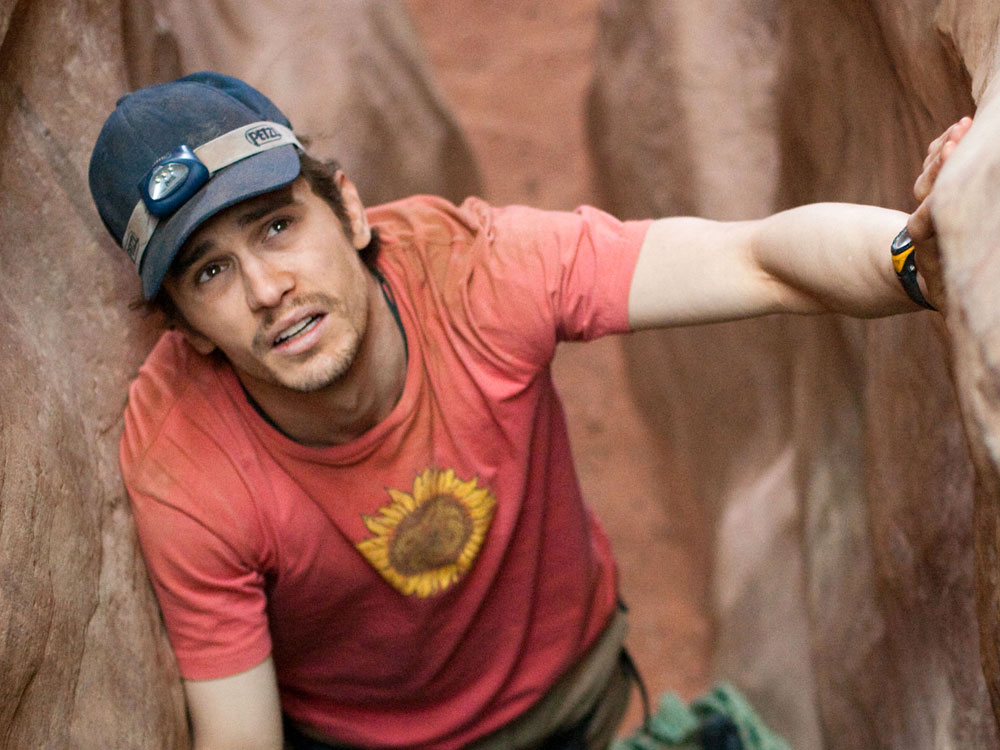 Life or Death: James Franco stars as Aron Ralston, a hiker who spends days trapped by a fallen rock in Utah — having told no one where he was going.

Rated R for language and some disturbing violent content and bloody images.

Other than to crank out an art-horror pic for the holidays, was there a compelling reason to make a movie out of the ordeal of Aron Ralston, the avid Utah hiker who spent several days with his arm pinned under a boulder in the spring of 2003?

For all I know the man may be a philosopher king in real life, but even as played by the wonderfully mercurial James Franco, the Aron in Danny Boyle's frenetically busy 127 Hours doesn't have enough soul to justify our spending a whole movie squeezed into a crevice with him.

Still, when first we meet Aron prepping for a solo weekend in canyon country, he promises to be an engagingly contradictory pain in the behind. (He's certainly a lot more appealing than that Eeyore-ish dude who went Into the Wild under the aegis of Sean Penn.) An exuberant, resourceful loner, Aron is perpetually high on life, good at brief encounters with strangers and laboring under the impression that he's in charge of nature rather than the other way about.

In other words, he's a callow youth ripe for some humble pie, and since Boyle (Trainspotting, Slumdog Millionaire) is not a man to waste precious action time on character development, the elements are busy having their wicked way with our hero within minutes.

After a brief frolic with two party-girl climbers played by Kate Mara and Amber Tamblyn, who deserve better than being bosom-fodder for Boyle's bobbing, weaving lens, Aron heads off happily alone, accompanied by a thumping soundtrack and, for bonus kinesis, much fancy footwork from the cameras of two cinematographers.

So the Thing Happens and there he is, his arm wedged between two giant rocks that together, one can't help noticing, bear a remarkable resemblance to a primary female sex organ. Boyle traps us in there with him, using a lot of close-ups, but the question remains, what next? Well, more split screens and throbbing music and oodles of other visually arresting filler as Aron rations his meager supplies, records farewell thoughts for his loved ones on his video camera and chips away at the boulder with an old penknife. This movie is nothing if not a film about process, and if you're up for that you will likely leave satisfied. 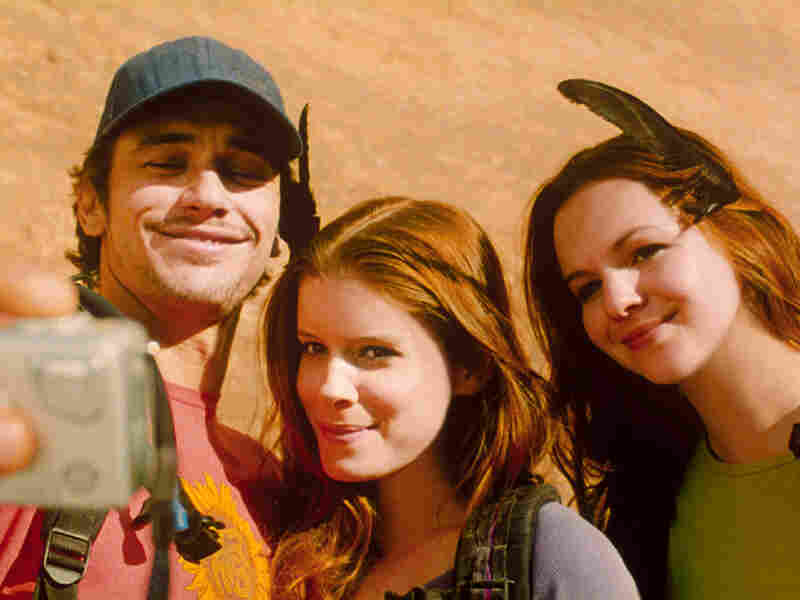 Near the outset of his fateful trek, Aron meets two hikers (Kate Mara and Amber Tamblyn); later he'll wonder if they were the last people to see him alive. Chuck Zlotnick/Fox Searchlight Pictures hide caption 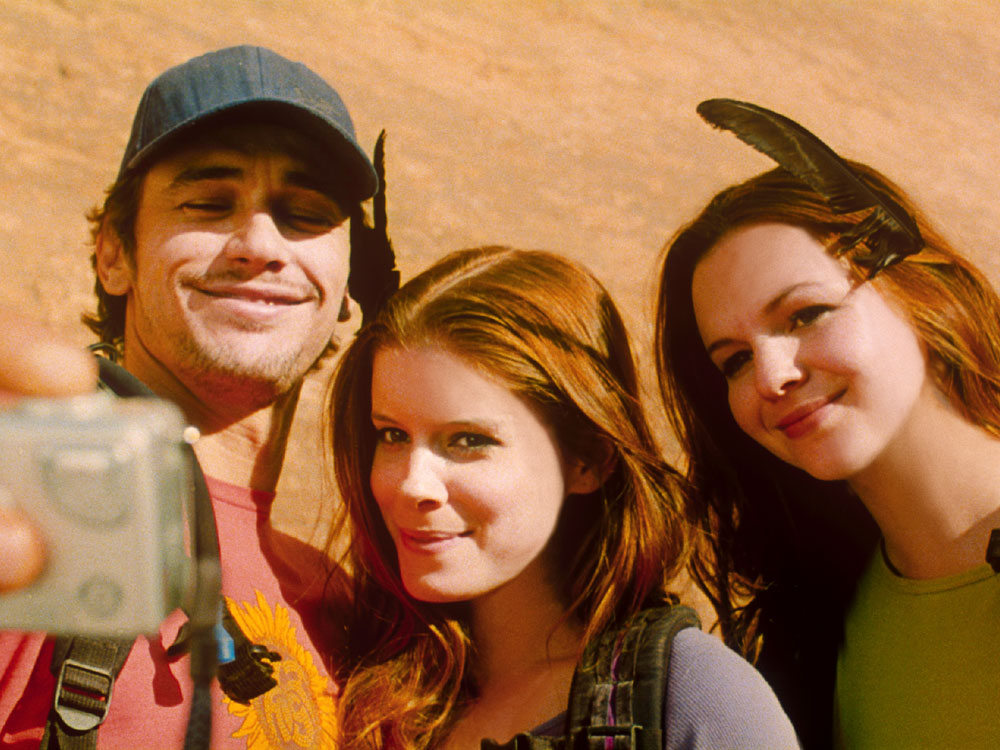 Near the outset of his fateful trek, Aron meets two hikers (Kate Mara and Amber Tamblyn); later he'll wonder if they were the last people to see him alive.

For people who need people, though, Boyle and screenwriter Simon Beaufoy (who wrote Slumdog Millionaire and The Full Monty) fall back on the old life-passing-before-my-eyes gambit, which might have gotten us a little more emotionally invested if Aron's regrets didn't come straight out of a TV movie. There's little for the instinctively enigmatic Franco to do other than look alternately stricken and bemused as Aron flashes, in no particular order, on neglected family and friends, the girl he didn't love enough to keep (Clemence Poesy, she of the refreshingly crooked teeth), the alluring hiker girls and the party they invited him to, the even more alluring sports drink he carelessly left in his car.

In the absence of existential payoff -- and really, why would there be, given that what saved Aron was his practical know-how, his physical courage and very possibly his lack of imagination, none of which add up to a movie? -- Boyle falls back on heavy weather and some grisly stuff for the climax. Even by my super-wimp standards, Aron's exit is surprisingly coy, coming from a filmmaker who gets his kicks from goosing the hell out of his audiences. Had Ralston wanted to rustle up a bona fide horror movie from his experience, he'd have been better off going with the Saw people -- who reportedly came calling for the option on his puckishly titled memoir, Between a Rock and a Hard Place. As it is, all we're left with is the reassuring whir of a rescue copter, a coda celebrating the real-life Aron's current triumphs, and the bland warning to always, always tell Mommy where you're going before you leave.