Accessibility links
Backstage With The Original 'Mickey Mouse Club' Today, the Mickey Mouse Club is known for its perky, wholesome cast of Mouseketeers. But when Walt Disney first pitched the series more than 50 years ago, he was just looking for a way to finance Disneyland. Jennifer Armstrong looks at the history of the show in her new book, Why? Because We Still Like You.

More than 50 years ago, Walt Disney turned to television for a way to help finance and promote a new project -- Disneyland. He pitched a number of ideas for programs to ABC and, eventually, one of them interested studio executives enough for them to give it a shot.

That idea turned into The Mickey Mouse Club, a children's variety show that would grow to become a hit series that featured a wholesome cast of Mouseketeers. Author Jennifer Armstrong takes a look at the history of the show in her new book, Why? Because We Still Like You. 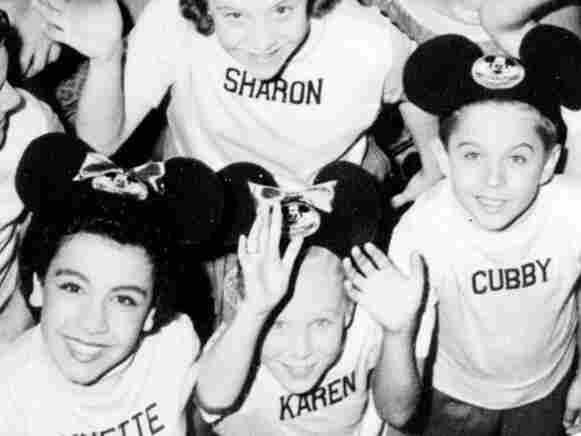 Armstrong tells NPR's Jennifer Ludden that The Mickey Mouse Club was only a half-baked idea when Disney first pitched it, which is, perhaps, why he ended up creating a project that involved wrangling together 24 children for a daily, hourlong television show.

"If you really think about it, what they ended up doing was this unbelievable undertaking," Armstrong says.

Why? Because We Still Like You: An Oral History Of The Mickey Mouse Club
By Jennifer Armstrong
Hardcover, 256 pages
Grand Central Publishing
List price: $25.99

But after a day or two of taping, Armstrong says producers learned one of the keys to making the show work: keeping the parents away from the production.

"Even the parents who weren't necessarily stage-y parents, how can they not be constantly trying to coach their child to the front?" Armstrong says.  Once they were free of parental oversight, the children "were much better behaved."

After that, the show was an instant success.

The audience fell in love with Mouseketeers like Annette Funicello, the only actor to be handpicked by Walt Disney himself, and the 5-year-old drum-playing Cubby O'Brien.

"It was the first show for children featuring mainly children as the performers," Armstrong says. "It was very revolutionary." 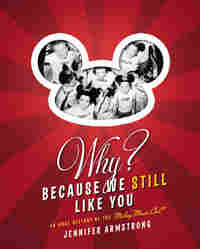 Why? Because We Still Like You: An Oral History Of The Mickey Mouse Club
By Jennifer Armstrong
Hardcover, 256 pages
Grand Central Publishing
List price: $25.99

Lonnie Burr's blond hair would be just so: the sides slicked back, the top a forever-cresting wave rising above his smooth forehead and breaking along the back of his skull. And then, as usual, one of the paunchy Mickey Mouse Club producers would come along and flatten the twelve-year-old Mouseketeer's coif with one glunk of his black-winged beanie straight onto the top of his head, suctioning it to his cranium and cutting a line across his eyebrows as if, perhaps, his brain might come off with it if squeezed tightly enough. A guy could have the coolest hair in town, but no one would know about it if he wore his Mouseketeer cap according to regulation. This fact alone made many of the older, teenage boys among The Mickey Mouse Club's two dozen cast members hate those ears that would become such icons of the 1950s. Pompadours were the rage. The guys had to have their waves out. And producers' demands that they wear the stupid hats way down on their heads wrecked everything. "All the guys hated the ears," Lonnie says now. "They'd always want us to wear it like a monk."

The solution: the boys would act like they were going along with the producers' ridiculous rules until the last second before shooting started, then sneak the cap back two inches or so, just as cameras started to roll, pushing as much hair as possible forward with it to approximate a decent wave. After all, they'd spent most of their preparation time in the morning washing, drying, parting, combing, dovetailing, and applying a gooey wave-set product that would dry as hard as glue, just to do it all over again and again throughout the day as they sweated through their dance numbers. It was the dawn of the rock 'n' roll era, and hair was a priority. So time and again, Lonnie and castmates Bobby Burgess and Tommy Cole would be there on the Mouseketeer soundstage, fidgeting a fraction of a second before the scene, doffing their caps to liberate their waves just as cameras started to roll. "If you watch the show, you can see the different sizes of waves out front," Lonnie says. "All of us boys had full manes of hair, and they wanted none of it showing," Tommy says. "The girls all still looked pretty because they had these waves of hair flowing down, but they wanted to make the boys look like little bald people!"

Yet when the stage bells rang to signal the cameras were rolling and the director called for "action!" you'd never know the angst those ears were causing the boys. The faces beneath the hats would smile like that day was the best one of their young lives as they tapped, twirled, and sang their way through songs about everything from the importance of drinking milk to bicycle safety to cooking with Minnie Mouse. The millions of kids watching from home on the other side of the screen soaked it all in, oblivious to even the slightest hint that their favorite TV stars could be anything except cheerful. After all, the cast of Mouseketeers—known as "Mice" to those on the inside—were the most popular kids in the country, the envy of every kid growing up in the mid-1950s, privileged members of the fairy-tale-perfect Walt Disney family.

At five p.m. every weekday, just when homework had started to feel unbearable but dinner was still simmering on the stove, youthful fans would rush to the television sets their parents had just purchased, click the dial to ABC, and sing along from the opening "Mickey Mouse Club March" to the final "Alma Mater" sign-off. They'd delight in the four fifteen-minute segments of the daily show: the newsreel, the Mouseketeers' performance (which could include skits, dance numbers, circus acts, or performing guests, depending on the day), the Mickey Mouse cartoon, and the unfolding drama of serials such as The Adventures of Spin and Marty and The Hardy Boys. Though the Mouseketeers were only a portion of the show, they were the part the fans cared about: Loyal viewers wanted to belong to any club that included these kids who seemed to know how to do anything and everything.

After The Mickey Mouse Club premiered on October 3, 1955, the kiddie shows airing in its time slot on the other networks moved out of its way, and for good reason: Walt Disney was a force to be reckoned with when it came to programming to families at that time, and the master had outdone himself once again. The Mickey Mouse Club brought glitzy production values and true entertainment to its child audiences, which it took seriously. The Mouseketeers may have accounted for only a quarter of the hourlong broadcast, but the real secret ingredient was the youthful cast. Raved Los Angeles Times critic Walter Ames the day of the show's debut, "Any one of these children could be a star in his or her own right."

More than ten million children watched the first season of The Mickey Mouse Club, and two million Mouse ears sold in the show's first three months, proving that kids mattered in this new mass-communication-driven world. The Mickey Mouse Club demonstrated that a group of ordinary children could put on a crowdpleasing show and that kids their age would tune in en masse to watch it. The series spoke straight to the prepubescent crowd at a pivotal time in their lives, when they were primed to fixate on anything they felt was just for them. The Mickey Mouse Club made a generation of kids feel like they belonged to their own elite group, a feeling that would lodge itself in their hearts and make them remember Mouseketeers Annette, Tommy, Darlene, Cubby, Karen, Lonnie, Sherry, Doreen, and the rest of the gang for the rest of their lives.

The kids glued to their TV sets every evening for The Mickey Mouse Club could rattle off the five theme days easier than they could recite the Pledge of Allegiance: Monday's Fun with Music, Tuesday's Guest Star Day, Wednesday's Anything Can Happen, Thursday's Circus Day, Friday's Talent Round-Up. They knew the nine most popular Mouseketeers by name as they sounded off in Roll Call: Annette! Tommy! Darlene! Bobby! Doreen! Cubby! Karen! Lonnie! Sharon! And having a favorite Mouseketeer was as important as having a best friend. A four-year-old girl watching in California might idolize Doreen for her wide-eyed beauty. A twelve-year-old boy in Illinois might covet famed Mouseketeer sweetheart Annette Funicello so much that he'd spend most of his viewing time grumbling with jealousy that guys like Lonnie and Bobby got to be so near the dark-haired goddess. A five-year-old boy in Maryland might see host Jimmie Dodd playing the guitar and make one of his own out of a cardboard box and rubber bands. Moms would encourage it all, happy to have the kids settled down for an hour and even happier that they were watching those pleasant Mouseketeers sing such nice songs. 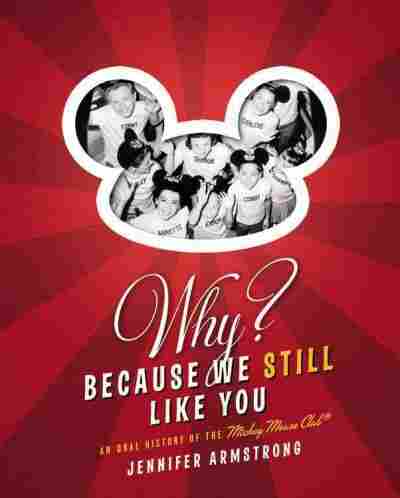 An Oral History of the Mickey Mouse Club

Title
Why? Because We Still Like You
Subtitle
An Oral History of the Mickey Mouse Club
Author
Jennifer Armstrong