Accessibility links
Obama, GOP Grapple With Power Shift President Obama called the outcome of Tuesday's election "a shellacking," while Republicans cast it as a de facto mandate to roll back what they see as the excesses of the Obama administration. The president promised to find areas where Democrats and Republicans could work together.

Fresh from sweeping election victories, Republicans jockeyed with President Obama to claim the political high ground Wednesday, with both sides pledging bipartisanship but warning against a return to gridlock.

A conciliatory Obama called the vote "a shellacking" at a White House news conference. He promised to find areas where Democrats and Republicans could work together, but in a nod to his health care overhaul, said it is important "not to spend the next two years re-litigating the decisions of the last two years."

Republicans, meanwhile, wasted no time in declaring that Tuesday's capture of the House and gains in the Senate and key governorships was a de facto mandate to roll back what they see as the excesses of the Obama administration.

Rep. John Boehner, the man likely to be the next speaker of the house, said at a Wednesday news conference that he was humbled by the mandate the American people had given his party.

"We are ready to roll up our sleeves and go to work on the people's business," the Ohio Republican said. He was joined by Senate Minority Leader Mitch McConnell of Kentucky and Mississippi Gov. Haley Barbour, who headed the GOP campaign that grabbed 10 governorships for the party.

In line with the Pledge to America -- a campaign manifesto unveiled by Republicans only two months ago -- Boehner said the party's top priorities were to cut spending, foster job growth and reduce the size of the deficit.

Obama's health overhaul law was also in the crosshairs.

In earlier remarks, Boehner denounced the legislation passed earlier this year as a "monstrosity" that must be repealed and replaced by "common sense reforms."

Obama called Boehner late Tuesday to congratulate him and offer his hope that the two parties could work together.

"We discussed working together on the people's priorities -- cutting spending and creating jobs," Boehner said. "We hope he is willing to work with us on these priorities. But as I have said, our new majority will be the voice of the American people as they expressed it so clearly yesterday."

Boehner said Speaker Nancy Pelosi had tried to reach him by phone. "She left me a very nice voicemail," he said, adding that he felt confident there would be a smooth transition as Republicans take up the reins of power in the House.

McConnell called it "a happy day for the three of us."

But the Republican trio was short on specifics, which Boehner assured would be forthcoming in the months ahead.

House Republican Whip Eric Cantor, picking up the script from Tuesday night's GOP victory speeches, said earlier that voters had given the party "a second chance, a golden opportunity" to prove themselves just two years after Obama was swept into office.

But Cantor, appearing on CBS' The Early Show, acknowledged that the results that saw his party win at least 60 House seats — the biggest turnover in more than 70 years — were more about a repudiation of the Obama administration than a vote for the GOP's agenda.

Senate Majority Leader Harry Reid, who helped Democrats maintain Senate control by holding his seat in Nevada after a tough fight with Tea Party candidate Sharron Angle, sounded defiant in his Las Vegas victory speech. He compared the election to a boxing match and vowed to fight another round.

By Wednesday, however, Reid was talking consensus.

Although he chastised Republicans for stonewalling the legislative process with numerous filibusters in the past two years, Reid said at a news conference that he was "begging for Republican input and I hope we'll get some of it."

"The future of the country is at stake," Schumer said. "If the pie stops growing for a long period of time, we don’t have the America we know, and nobody wants that."

The insurgent Tea Party movement, which backed several conservative candidates, had a mixed showing Tuesday night. Some of the movement's highest-profile candidates went down to defeat, among them Angle in Nevada, Senate candidate Christine O'Donnell in Delaware and New York gubernatorial hopeful Carl Paladino.

In Kentucky, however, Tea Party favorite Rand Paul beat out Jack Conway, and the movement's backing for Marco Rubio in Florida helped him turn back Democrat Kendrick Meek and independent Charlie Crist.

About two dozen House races were still too close to call and three Senate seats — in Alaska, Washington and Colorado — were still in flux Wednesday. In Colorado, Democratic incumbent Sen. Michael Bennet declared victory based on his narrow lead, but his Republican opponent, Ken Buck, didn't immediately concede.

Republicans picked up at least 60 House seats, far higher than the 39 they needed to take control of the chamber.

Among those Democrats going down were Rick Boucher of Virginia, who serves on the powerful Judiciary Committee and on Energy and Commerce; Indiana Rep. Baron Hill, a moderate Democrat and fiscal conservative; Ike Skelton of Missouri, chairman of the House Armed Services Committee; Paul Kanjorski of Pennsylvania; Gene Taylor of Mississippi; Chet Edwards of Texas; and Allen Boyd of Florida.

South Carolina elected State Rep. Tim Scott to the House. He will be the first black Republican to serve there since Reconstruction — as well as the first black GOP representative since Oklahoma's J.C. Watts retired in 2003.

Many Democrats elected in 2008 as President Obama reached the White House were swept out just two years later. The wave disposed of liberals, moderates and conservative Democrats alike.

Democratic incumbents still on the job include Reid in Nevada, Barbara Boxer in California, Kirsten Gillibrand and Charles Schumer in New York, Pat Leahy in Vermont and Barbara Mikulski in Maryland. Republicans holding on to their seats include John McCain in Arizona, Mike Crapo in Idaho, Richard Burr in North Carolina, Tom Coburn in Oklahoma, Johnny Isakson in Georgia, Jim DeMint in South Carolina and Richard Shelby in Alabama.

The State Of The States

Across the nation, 37 governors' offices were up for grabs, as well as control of many statehouses. State-by-state outcomes will affect redistricting decisions that could have a lasting impact on the political landscape.

In California, political veteran Jerry Brown, a former governor and onetime presidential hopeful, will return to Sacramento after defeating billionaire Republican Meg Whitman -- who spent nearly $150 million on her campaign.

Democrat Andrew Cuomo won in New York, taking the office once held by his father, Mario.

A tight race in Ohio -- tighter than many thought it would be -- saw Republican John Kasich unseat Democratic Gov. Ted Strickland. 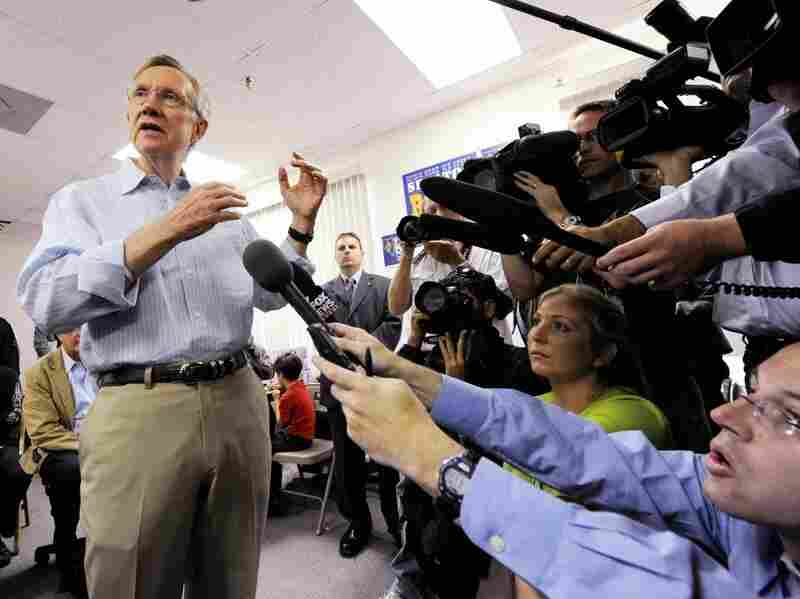 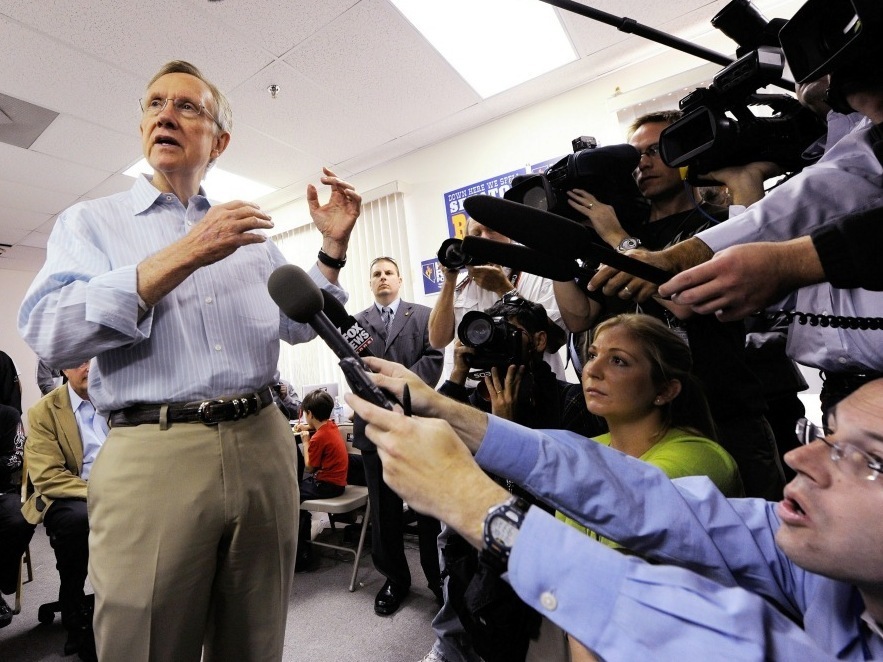 U.S. Senate Majority Leader Harry Reid (left) talks to members of the media at one of his campaign headquarters in Las Vegas. Reid retained his seat for a fifth term, defeating Republican challenger and Tea Party favorite Sharron Angle.

Another first: Susana Martinez, the Republican who won in New Mexico, will be the nation's first Latina chief executive.

Nationally known incumbents who will keep their jobs include Texas Gov. Rick Perry on the Republican side and Massachusetts Gov. Deval Patrick for the Democrats.

It's Decision Time For GOP

Republicans must decide whether the results give them a true mandate for an agenda that might include tax cuts, smaller government and a repeal of the federal health care overhaul.

"My recommendation to [Republicans] … would be that they immediately figure out who among the Democrats might form a bipartisan majority," former Republican House Speaker Newt Gingrich told NPR.

Gingrich says the key for Republicans is to cooperate but not compromise, a point of view echoed by Ken Duberstein, who was President Ronald Reagan's chief of staff from 1988-89.

Duberstein said Republicans must recognize that "this was a referendum on Obama and the Democrats. It was not because the country is in love with your agenda. Big, big difference."

"Find areas of working together with President Obama to demonstrate to the country that you are not the party of 'stop.' That you are a party of 'go,'" he told NPR.

What's clear is that voters were not responding to any sort of coherent political message this time around -- unlike the GOP's "Contract with America" in 1994 or the criticism of the Iraq war that drove Democratic gains in 2006 and 2008.

Although Democrats still hold the White House and the Senate, they may not be able to get much done in these highly partisan times. Even with their previous 59-41 advantage (which included two independents who caucused with the Democrats), they had trouble achieving a 60-vote, filibuster-proof supermajority.

Yet the sweeping Republican victory might raise more questions than it answers, at least in the short term. Many elected as Republicans on Tuesday -- including Tea Party candidates -- are unknown quantities to mainstream party leaders.