Accessibility links
Yankee Stadium: In With the New, While Keeping the Old The New Yankee Stadium is a $1.5 billion investment in the Bronx, meant to evoke the grandeur of the Yankees tradition while providing all the modern comforts.

The Yankees suffered a 10-2 drubbing on Thursday in their first home game this season -- and their first regular season game ever at the new Yankee Stadium. The stadium, at least, is scoring with some fans.

The new stadium is stately, luxurious and, of course, costly. It stands right across the street from the old one, in the Bronx, but you can also find it on Wikipedia's list of the world's most expensive objects, sporting a $1.5 billion price tag. 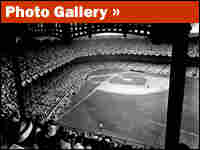 See The History Of Yankee Stadiums -- From Old To New

That ranks Yankee Stadium just below the space shuttle in cost, which might seem like something of a bargain, given that the space shuttle doesn't feature a steakhouse right above a Hard Rock Cafe. The new stadium does. And sure, you could buy two Hoover Dams for the price of the new Yankee Stadium, but longtime fan James Pisano seems to appreciate features offered by no known dam.

But there are plenty of places to buy a new one. "You can't move five feet without hitting a store," says Tom Cassidy.

Nothing 'Too Opulent For Pinstripes'

The stadium offers plenty of retail shopping choices as well -- and boasts seat prices that top out at $2,500 for a single game ticket. Some of that cost should help defray part of the stadium project's costs, more than $300 million of which is being directly borne by the City of New York, according to the city budget office.

But that's not the team's only concern: Several Yankee players have the richest contracts in professional sports. The Yankees tell fans that everything's top-notch; that message is getting through.

Take Katchi Pritchet, who hasn't missed an Opening Day in nine years. "I don't think there's anything too opulent for pinstripes," Pritchet says.

A lot of other major league teams deflect the word "stadium" itself. Of the 19 ballparks that have opened in the past two decades, this is only the second to call itself a stadium, rather than a park or a yard or a field.

Baseball park expert Joe Mock of BaseballParks.com says teams sought to offer fans the stability of "a stadium" nearly a century ago as they shifted from firetrap facilities made of wood in favor of structures made from steel and concrete. But tastes in nomenclature changed in recent decades, as fans hungered to be closer to the game.

"It's gone full circle," Mock says. "There was a desire for ballparks to become more personal, more intimate, and the word 'stadium' just sounded a little, maybe, ostentatious or a little bit sterile."

Pricey, But Not Perfect

Yet the new Yankee Stadium has few traces of whimsy. Unlike at the New York Mets' brand-new home, there is no dunk tank or Wiffle Ball park. In fact, the only humor is somewhat unintentional: The in-stadium Yankee Museum has not only a bat used by Babe Ruth but a seat from every iteration of Yankee Stadium. It serves as a chronicle of the widening of the American backside.

There are other flaws, too. Two sections of outfield bleachers were built so close to a center field sports bar that it made seeing the field all but impossible. The Yankees discounted those seats, but the scalpers didn't get the memo. They sold them to Mark Burke for $240 apiece. He said the face value was $5.

"So I paid a ridiculous amount of money," Burke acknowledged. "I actually flew up from Florida to come to this game. I've been coming to Opening Day for the last eight years. I wasn't going to miss this one."

As the Yankees can attest, preserving a rich tradition comes at a cost.