Accessibility links
Red Hook: A Mystery Writer's Guide to the Bricks and the Bodies of the Neighborhood Writer Gabriel Cohen bases his Detective Jack Leightner series in Brooklyn, where he says the neighborhoods "are not static at all. The lines where things are changing create conflict and sometimes create violence," which is reflected in his books. 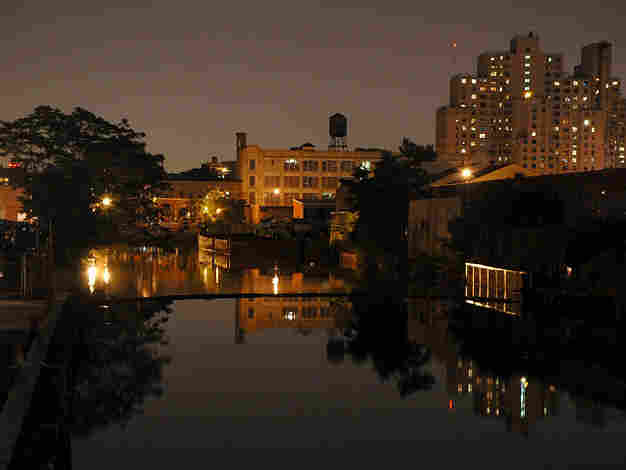 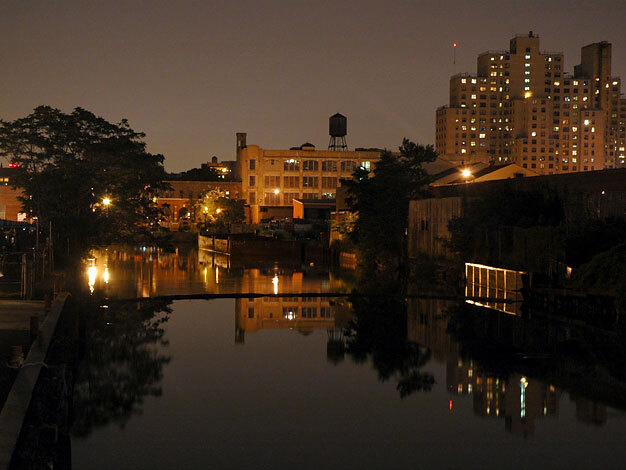 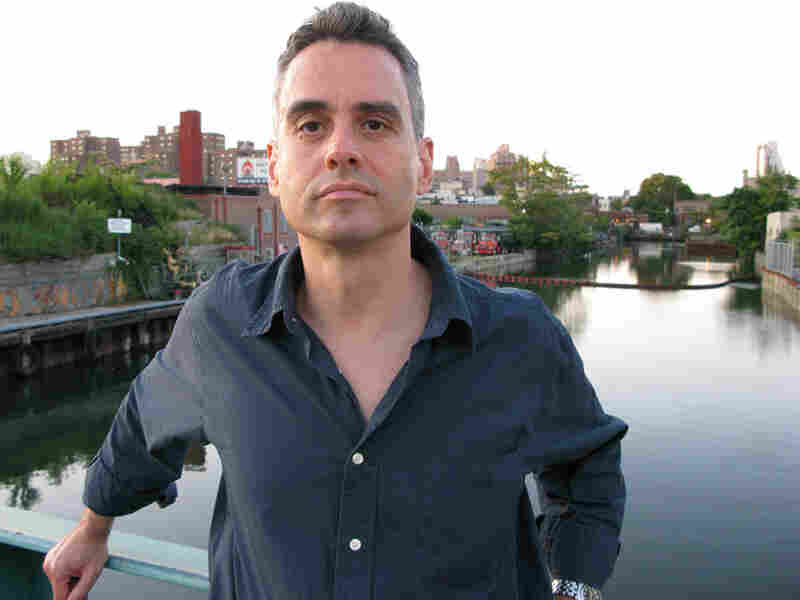 Gabriel Cohen poses near the Gowanus Canal, the site of one of the bodies that turns up in his first novel, Red Hook. Robert Smith/NPR hide caption 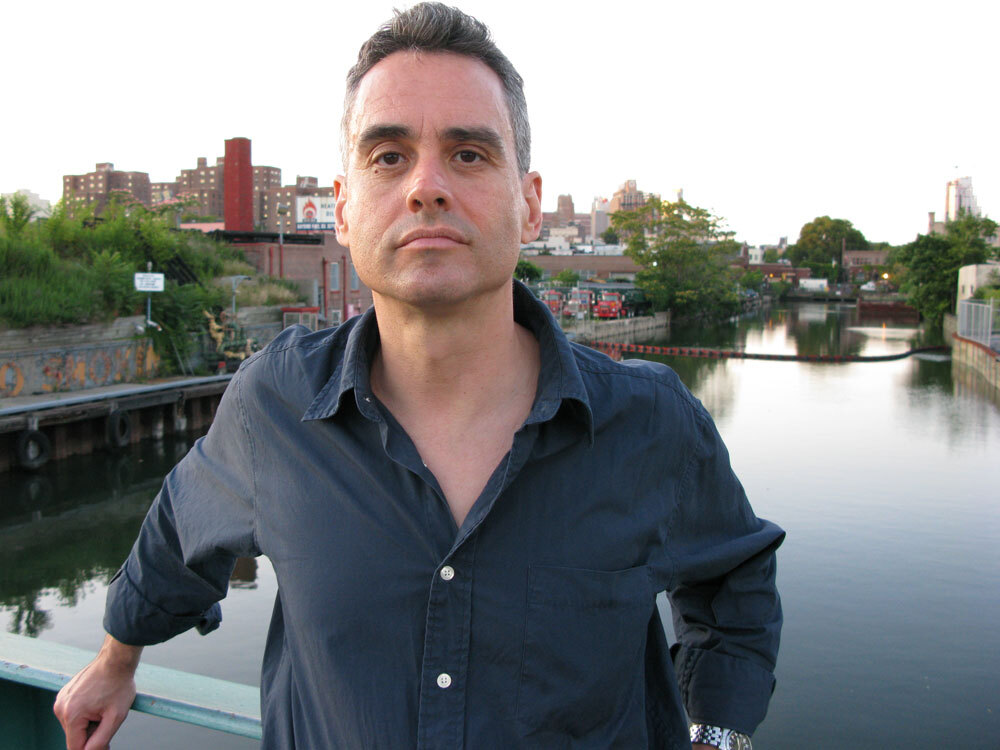 Gabriel Cohen poses near the Gowanus Canal, the site of one of the bodies that turns up in his first novel, Red Hook. 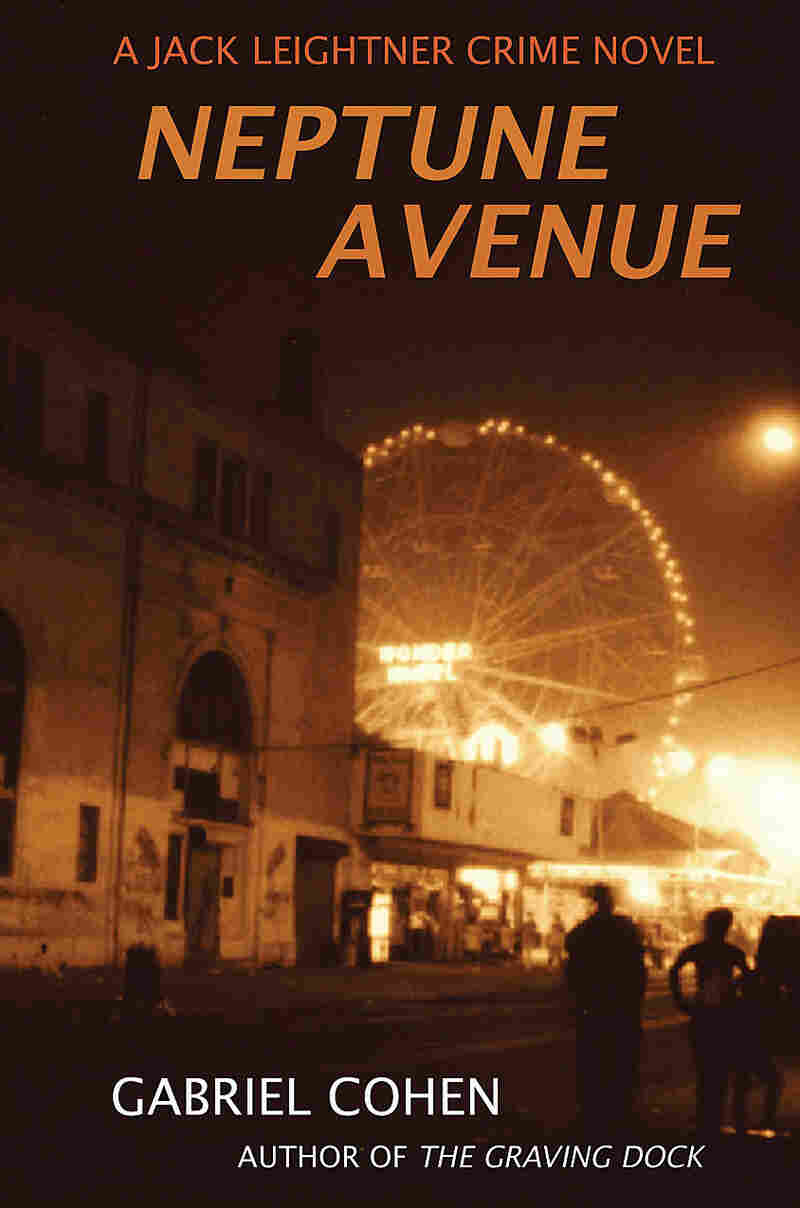 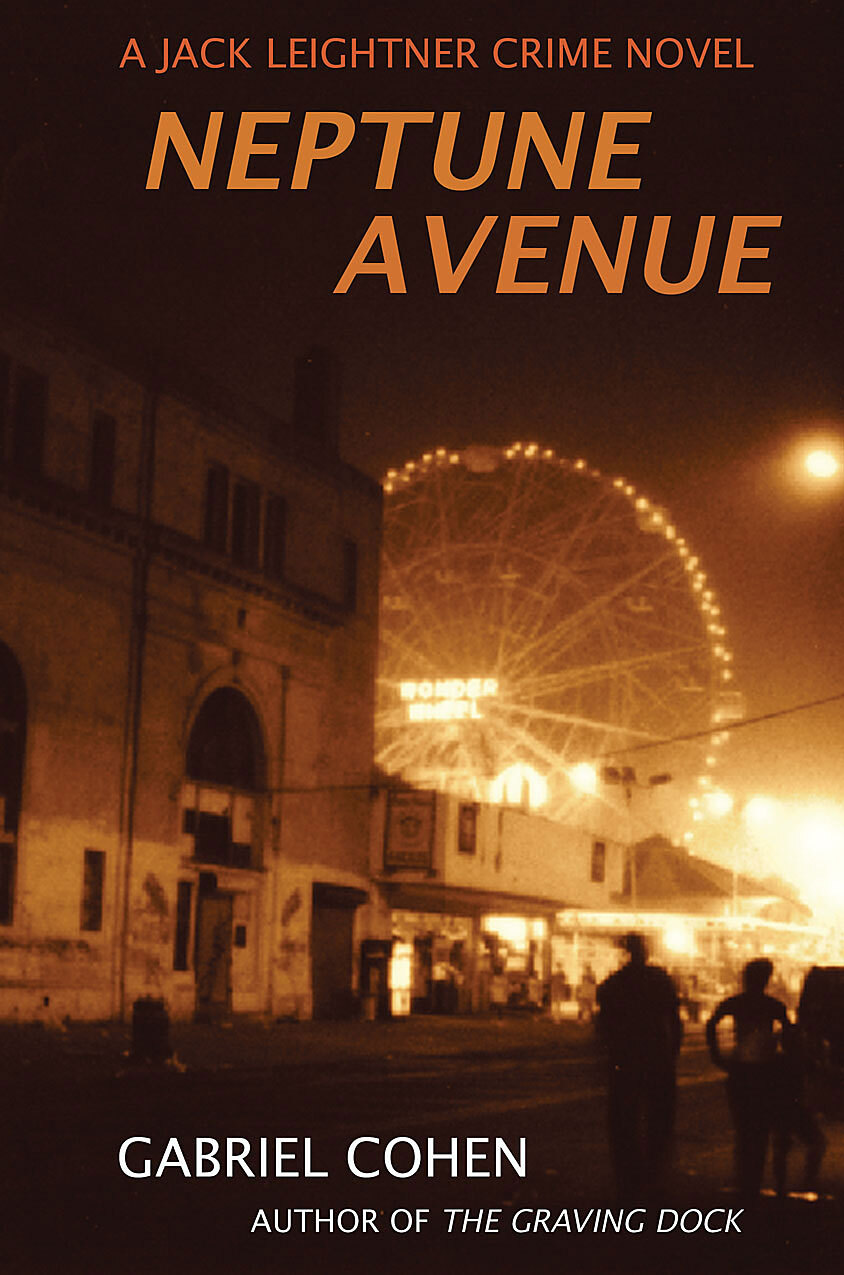 To get a flavor of Cohen's Brooklyn in his latest book read an excerpt that details Brighton Beach.

With the drop in the murder rate in Manhattan, what's a New York mystery writer to do? Gabriel Cohen, for one, keeps his fictional detective across the East River in the borough of Brooklyn.

"So much of the life of Manhattan is hidden at the top of those buildings," Cohen says. "In Brooklyn, life is pretty much out on the street, out on the stoop, out on the waterfront."

Perfect for a detective -- and for a writer who wants to explore neighborhoods and history through a detective's eyes.

On a recent sunny afternoon, Cohen heads to Brooklyn's Red Hook neighborhood, the home turf of his fictional NYPD detective, Jack Leightner. Cohen travels the same way his protagonist might: by boat. But instead of a police patrol, Cohen takes a water taxi across the East River.

In Cohen's series of three novels, Leightner investigates homicides across the borough of Brooklyn -- especially along the waterfront. And like his character, Cohen doesn't exactly love the water.

"I get seasick just thinking about getting seasick," Cohen jokes.

Luckily, it's a calm day -- and Cohen pops motion-sickness pills. The boat skirts Governor's Island and swings into Buttermilk Channel. From the top deck, Cohen points to a few old cargo cranes and maroon brick warehouses.

"A lot of New Yorkers don't know much about this strange, low, flat waterfront neighborhood with these old Civil War-era warehouses," Cohen says.

Cohen certainly didn't know much either when he first started exploring the neighborhood a decade ago. This was before he was a crime writer. Cohen remembers wandering the empty cobblestone streets of what was once a thriving New York port, wondering what had happened.

"To me, it was a profound mystery. It wasn't just somebody killing each other, it was the mystery of what happened to this neighborhood," Cohen says. "How could it possibly have been so busy and then now be so quiet? I chose this character, who was in the thick of all that, who enabled me to explore it."

The water taxi arrives at the dock in Red Hook. Most of the crowd on the ferry is heading over to a new IKEA on the old waterfront, but Cohen turns down one of the deserted side streets.

In Cohen's first crime novel, Red Hook, Leightner is pulled back to this neighborhood when a body turns up near an old industrial canal.

For Leightner, it's an unwelcome homecoming; the detective's father was a Russian immigrant, a dock worker here, and Leightner's son is a young filmmaker who is doing a documentary on the neighborhood. And Jack? Like Red Hook itself, he is complex.

"He's a loner," Cohen says. "He's a bit of a sad sack. He focuses so much on his job that he finds he doesn't have much life outside of work. But I love the guy. Because he has a real passion and commitment for what he's doing."

Leightner's social life consists mostly of hoisting a drink. Cohen turns the corner and points to one of his literary inspirations -- a lit sign with just three letters on it: B-A-R.

This is Sunny's, a Red Hook institution for three generations. Cohen moves to the back of the place to find Sunny Balzano.

Balzano was born in the house next door. Like his father and grandfather, he still runs the bar. If you want to investigate the death of Red Hook, Balzano would be an eyewitness.

"In those years when I was growing up, it looked like the Long Island Expressway out there in the river," he says. "This was one of 40 bars in the whole neighborhood. This is the only one that is left from that era."

Sunny's Bar doesn't appear by name in any of Cohen's mysteries, but Balzano's stories infuse Cohen's series of novels. Back in the day, Balzano says, with all the money and cargo and longshoremen pouring through the neighborhood, crime was a fact of life. Balzano remembers one murder just outside.

"It was a vendetta on the iceman," he says. "I heard this cracking at 5 or 6 in the morning, and I looked out the window and I see this body, just oozing blood."

But that was a long time ago. Balzano left the neighborhood when he was young man and when he got back, the crowds, the ships, the bars were all gone.

The next bit of evidence in "The Case of the Missing Neighborhood" is outside the bar, down by the water. Cohen points across the harbor.

"If you look to New Jersey, you see a thicket of cranes from the ships," Cohen says. "A lot of that shipping and unloading moved to New Jersey because it's much easier to have access to railroad yards there, and that just devastated this neighborhood."

So in the death of Red Hook, New Jersey is a prime suspect. A likely accomplice: the technology of container ships, which made the Hook's old piers obsolete. As the neighborhood emptied out, it became a good place to dump a body -- which is what keeps Cohen's detective Jack Leightner coming back.

In Cohen's second Leightner novel, The Graving Dock, he writes about "Floater Week":

When the water warmed up, bacteria released gases in the corpses and they rose to the surface, usually around mid-April. It was known as Floater Week. There was a strange poetry to it, all those submerged bodies rising up: The drunken boaters. The bridge jumpers. The victims of mob hits (who often escaped their concrete shoes or chains as their bodies softened and frayed).

On this visit, however, there are no bodies in the water. A group of fishermen from the nearby housing projects say all they've seen is empty containers, bottles and a lot of condoms.

One of the fishermen, Al Torres, grew up here in Red Hook, in the ghost town days of the 1980s. It was dangerous, Torres says, but at least there was some sense of freedom.

For Torres, the guilty party in the death of the neighborhood is all the new development springing up in the empty lots and warehouses -- condominiums and restaurants and that new Ikea. That brought in more cops, he says, and more people watching him.

"They put up cameras, surveillance," Torres says. "I miss it when they ain't have none of that. They should have put the condos and grocery stores someplace else."

Cohen says it's the kind of tension that fuels his mysteries. In Brooklyn, some group is always displacing another:

"There are so many different forces working on these neighborhoods. They are not static at all. The lines where things are changing create conflict and sometimes create violence."

It's not unusual in a Jack Leightner mystery for there to be a black victim and a Hassidic suspect, or for the body of a young Hispanic man to be linked to a rich white real estate developer. There is no shortage of grudges in Brooklyn these days.

To end his tour of Red Hook, Cohen leaves the waterfront to show off one final clue in the murder of the place: the Brooklyn-Queens Expressway

Cohen explains that when it was built in the 1950s it cut off Red Hook from the rest of Brooklyn. Without a subway stop in the neighborhood, and with the docks dying, the BQE was deadly poison.

The man who built it, New York urban planner Robert Moses, is a dark figure in Cohen's novels. The expressway was built over the childhood home of Jack Leightner.

So is Robert Moses the culprit? Like any good novelist, Cohen realized that there was a twist in the mystery of who killed Red Hook.

"It's not dead," Cohen says. "There's life in the old neighborhood yet. You see a lot of weeds coming up from the cracks in the Red Hook sidewalks and the whole neighborhood is like that. It's hopefully indestructible." 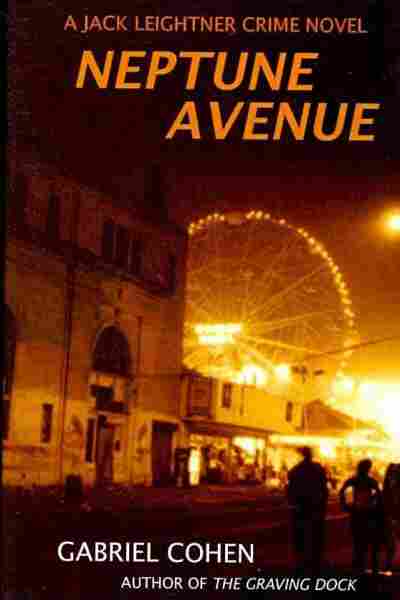